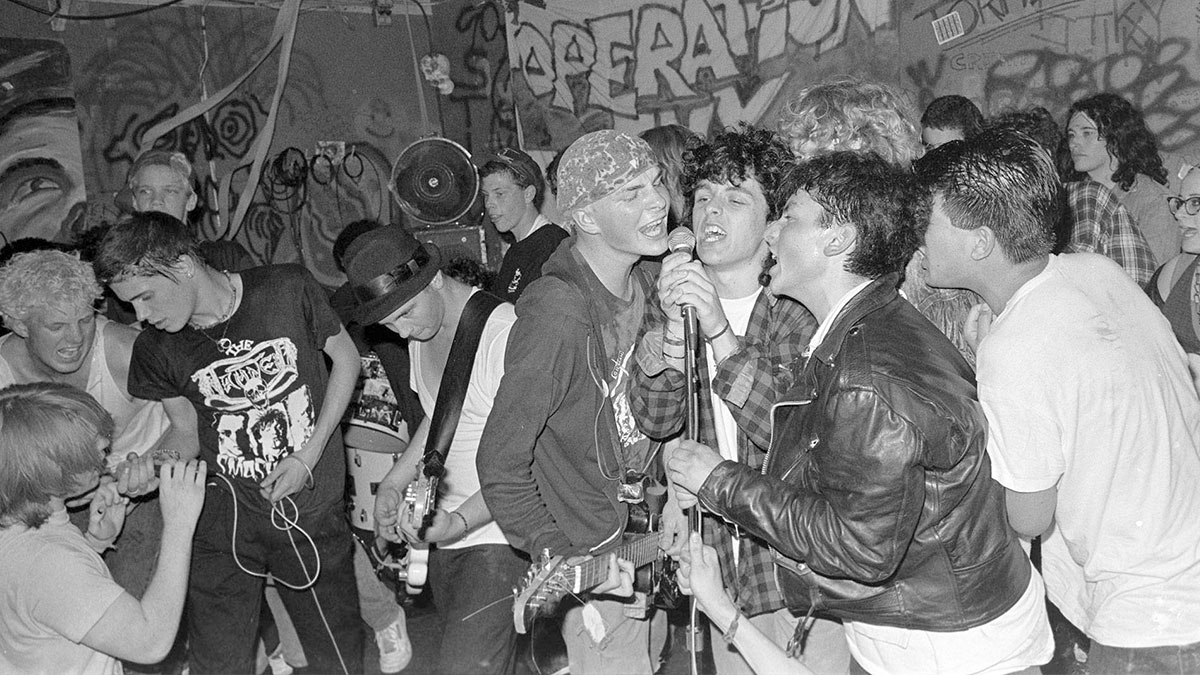 What do most people know about the East Bay punk scene? Green Day, certainly, and Rancid, too. Possibly Rancid forerunners Operation Ivy and Crimpshine, and maybe the Berkeley punk playhouse that brought up those bands, 924 Gilman.

If you want a clue about how deep the new documentary Turn It Around: The Story of East Bay Punk—which is showing for one night only on Wednesday, Oct. 18, at the Del Mar in Santa Cruz—dives into this long-underappreciated punk history, consider that it doesn’t even get around to Gilman Street and Op Ivy until an hour into its two-and-half-hour running time. A less ambitious documentary on East Bay punk might very well start there, but with its zeal to chart the complete lineage of the scene, Turn It Around is truly exhaustive.

But not exhausting. In fact, it moves along at such a rapid-fire pace for most of its running time that it probably requires more than one viewing to truly wrap one’s mind around everything it has to offer. How can you not get behind a documentary that within literally two-and-a-half minutes of mentioning “punk rock” for the first time, has already referenced the Ramones, Sex Pistols, Patti Smith, Dead Kennedys, Avengers, X, the Cramps, the Clash, Lou Reed, Angry Samoans, Fastbacks, Blondie, Flipper, the Buzzcocks, the Pretenders, Tuxedomoon, Blondie, the Stooges, David Bowie, the Dils and Devo—and that doesn’t even include the bands I didn’t think I recognized as they flashed by on the screen. That’s how fast this thing moves sometimes.

Those who come to it most interested in the scene’s breakout success stories might be surprised at how absorbing the pre-Lookout Records material is, and that’s partially thanks to some brilliant structural work by director/writer Corbett Redford and his co-writer Anthony Marchitiello. For instance, the film starts with a crude DIY-style animation sequence set to Crimpshine’s “Another Day,” then jumps back to footage of Vietnam War protests in Berkeley, with Country Joe and the Fish’s “Feel Like I’m Fixin To Die Rag” playing on the soundtrack. There’s a lot of mirroring going on here: both of those songs are by Berkeley bands, who released them exactly 20 years apart, in 1987 and 1967. The former approaches social commentary on a personal level, while the latter attacks it from a political one, setting a template for the themes of personal and political transformation that are at the heart of Turn It Around.

The long list of musicians, artists, activists and other members of the scene featured in Turn It Around runs from the expected (Lookout’s Larry Livermore, Dr. Frank of Mr. T Experience—whose “At Gilman Street” is sort of the movie’s unofficial theme—and the members of Green Day, Op Ivy, Crimpshine, Rancid, Neurosis, and pretty much every band from the last four decades of the scene) to the unexpected (Miranda July, Metallica’s Kirk Hammett, Guns N Roses’ Duff McKagen, Primus’ Larry LaLonde, Angry Samoans’ “Metal” Mike Saunders) to the simply delightful (the Yeastie Girlz, Pansy Division’s Jon Ginoli, Michael Franti, Tre Cool’s parents). Iggy Pop’s narration is just as gruff and quirky as you would hope it would be.

The highlights, to me, are the most offbeat bits, like Tim Armstrong suddenly breaking into Op Ivy’s “Hedgecore” on an acoustic guitar during his interview, Billie Joe Armstrong explaining how Pinole is different from the rest of the East Bay, the story about the Yeastie Girlz somehow performing Black Sabbath’s “Iron Man” on tampons, Franti remembering his band the Beatnigs driving their van directly from playing Gilman Street to opening for U2 in Yankee Stadium (and Bono admonishing him for accidentally calling the Irish superband’s guitar player “Ed”), and the tense tale of what happened when Nazi skinheads invaded Gilman.

The bottom line is that no matter how well you think you know the story of this music, you’re going to learn something from this film—probably a lot—and it’s a fun ride down the East Bay streets that drove this community to find each other and make some of the best underground music of all time.

Previous Article5 Things to Do in Santa Cruz this Week

Next ArticleLove Your Local Band: Bananarchy