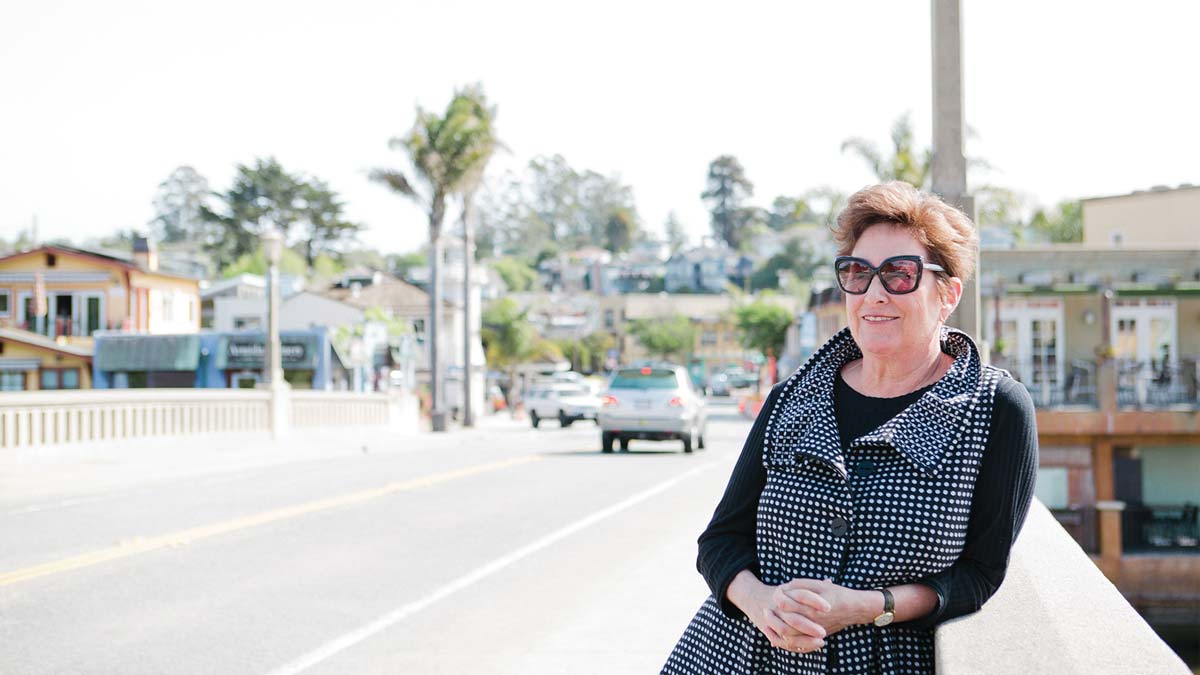 To sit down with Gayle Ortiz is to sit down with a chapter in Capitola history. Born in San Jose, Ortiz and her family would vacation on the sandy shores of Capitola every year when she was young. In 1978, Ortiz opened Gayle’s Bakery—which has since become a mid-county staple—and moved to the city two years later, never looking back. In 2000 she was elected to the Capitola City Council, where she became vice mayor and moved into the mayor’s seat the following year.
“To this day, I can go out in the foggy morning and smell the ocean, but I also smell hash browns cooking in the village,” Ortiz says. “And that combination of scents brings me right back to when I was 7 years old.”
This month Ortiz, along with a handful of Capitola-loving residents, is taking her appreciation for her community one step further with a grassroots group she’s calling Vision Capitola.
For two consecutive Wednesdays this month, beginning April 20, residents are invited to the Jade Street Community Center to voice where they would like to see Capitola in five to 15 years. She encourages residents to speak their minds, whether it’s about a pothole fix in the village, a noise ordinance in their neighborhood, or feedback for the Capitola police.  Participants can sign up to speak on the day of, or send in their ideas via mail or email.
The group of organizers has already printed and passed out more than 5,000 fliers throughout the various city sections, hand-delivering them in a neighborly gesture.

For two consecutive Wednesdays this month, beginning April 20, residents are invited to the Jade Street Community Center to voice where they would like to see Capitola in five to 15 years.

“Communities don’t really get a chance to be with their neighbors and talk about their values,” explains Ortiz, who also serves on the Capitola Planning Commission. “Having it be a grassroots movement, and not part of the city government, will hopefully draw more people.”
Capitola is only about two square miles, with a population of roughly 10,000, and yet it is split between three economically disparate areas: 41st Avenue, Capitola Village, and the Bay and Capitola avenues area. For the last several years, Ortiz says, residents and city officials have tried to figure out a way for these three areas to work in a more symbiotic fashion. Some areas have received harsher criticism than others, like the Capitola Mall, which has been the focus of complaints that range from it being antiquated to it being an eyesore, although the mall was just sold to a new group. Capitola residents and leaders are optimistic about its future.
“They are all extremely unique sections and I want to make sure we focus on that,” says Ortiz, “because that’s what makes Capitola strong financially.”
Economic development aside, Ortiz, whose husband Joe Ortiz is a well-known local musician, artist and playwright, hopes to hear people voice their concerns for the architectural preservation of their distinct region.
“I feel very strongly about historic preservation, and very much want to make sure our architectural history stays intact,” she says. “My other major goal is to make sure we get our new library.”
The idea for Vision Capitola originally came to Ortiz last year when she attended a meeting for Capitola’s recently ratified general plan that got her inspired. This next step will allow organizers to crowdsource specific suggestions for the city.
“The General Plan is a broad document,” says Capitola City Mayor Ed Bottorff. “I think Vision Capitola is trying to be more specific.”
Originally adopted in 1989, the Capitola General Plan, in its own words, “establishes goals, policies and actions that will guide conservation, growth and enhancement in Capitola over the next 20 to 30 years.” The plan expresses policy decisions in land use, zoning, business permitting and more while considering noise pollution, mobility use and the character of neighborhoods and residents. In 2014 the City Council decided to renew the General Plan and adopted the latest version last year.
That library is the first goal in the general plan’s grand scheme. Projected to break ground in June 2018, the new library looks to at least double the current space—from 4,320 square feet to at least 7,000, if not 10,000, square feet. “The new library will be huge compared to what it is now,” Ortiz says.
So far, Capitola has saved $2.7 million toward the new project and hopes to secure an additional $8 million through the Library Property Tax Initiative, which Ortiz supports, up for a county-wide vote in June.
“Educating people with what’s happening in our General Plan is very important,” says Ortiz, “because they’ll see where their values fit into this long-range plan for the city.”
Anyone who chooses to participate in the workshops is free to share any concern, idea for the future, or quality that they love about the city. After the first meeting, Vision Capitola volunteers will personally count and categorize every response, in all their various mediums, as a comprehensive list. At the second meeting, this list will be presented to the public, and residents are invited to listen and amend. Organizers will present the final version to the City Council in May.
“A lot of people keep asking, ‘What will come of this? What will happen?’” Ortiz says. “I hope it will spark people to be more involved in the city, run for office and build more community. In a city of 10,000 people, we can achieve a lot.”
Bottorff says the community’s input won’t go unnoticed.
“Whether people come to a council meeting and voice their opinion, or they get together in a grassroots effort like this, the Capitola City Council is always open to hearing from people about their city,” Bottorff says. “It’s actually their city, we just monitor it for them.”

Vision Capitola will be at 7 p.m. on Wednesday, April 20 and April 27 at the Jade Community Center, 4400 Jade St., Capitola. Visit visioncapitola.com for more information.