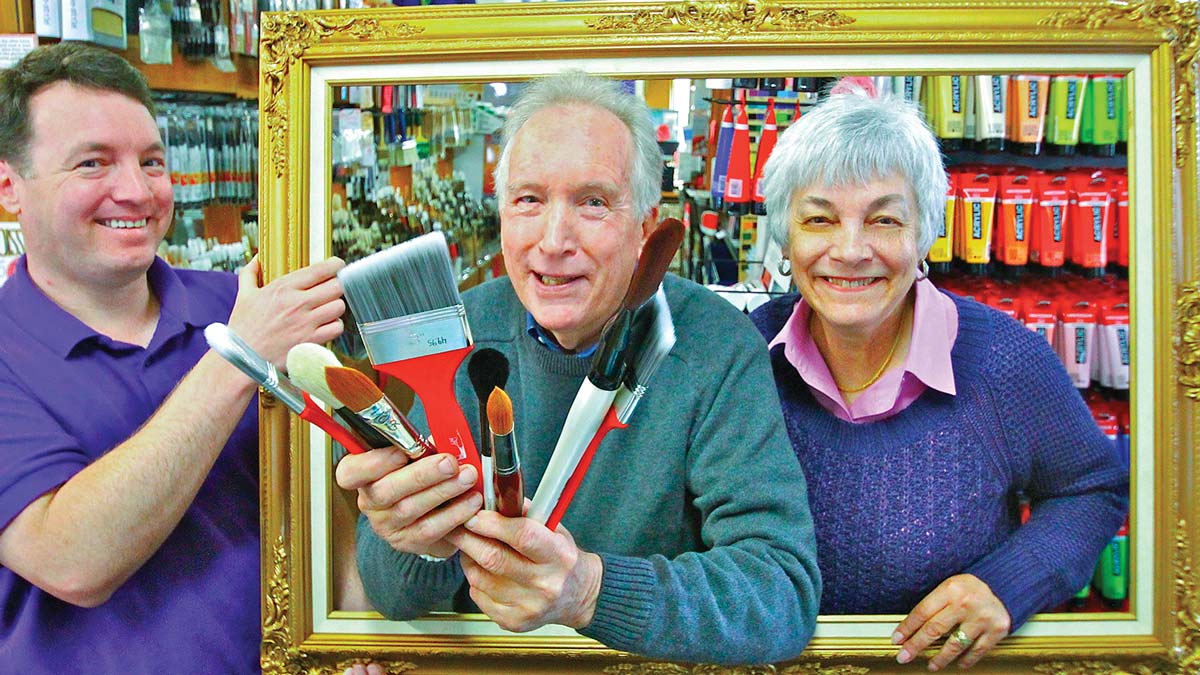 In almost 50 years of working together, Andy and Cynthia Lenz have put their personal touch on every inch of their Lenz Arts business. Of their recent Lifetime Achievement award at the International Art Materials Trade Association convention in Houston, Texas Cynthia Lenz is fairly pragmatic. “Well, it’s a big deal in the little art world,” she says with a grin. The international award went to Andy and Cynthia Lenz for the dedication and arts expertise that helped build Lenz Arts into a beacon for Central Coast artists, educators and designers.
“There wasn’t a real art store at all in this area, none that carried a variety of products from multiple product lines,” Andy recalls. “You would have to go to many stores to find what you needed.” So the couple filled in the gap.
It all began with Andy doing outside sales. “We had a number of ad agencies and architectural firms as clients who would need drafting supplies. I’d take orders in the morning, drive to San Mateo, and make deliveries in the afternoon,” he says, beaming.

“I wanted the store to be like my ideal studio. It had to have everything I would want for any art project,” she says. Andy, armed with a deep background in no fewer than five artistic genres, also realized that “you either teach, or do an art store. Well, teaching didn’t suit me.”

Born in Minnesota, Andy Lenz was raised in Idaho and Northern California. “Since the age of 12, I was always an artist,” he nods. After San Francisco Art Institute he took courses at Chico State. “There was a young woman in my ceramics class who looked like Lauren Bacall. I just had to meet her,” he says. A rendezvous in the school’s dining hall led to a date, then marriage shortly before graduation. Deciding against MFA enrollment in UC Davis’ art program, the couple pursued graduate studies at San Jose State. “I was into art history and I wanted to teach,” Cynthia recalls. “But we couldn’t find a decent place to live in San Jose,” Andy adds. So they settled in Santa Cruz, which Cynthia’s deeply rooted Santa Cruz family—the Pennimans—called home.
Frustrated by the lack of materials for his master’s degree artworks, Andy went home and told his wife, “This town needs an art store.” Founded in 1968, the Lenz’ first commercial storefront was across the street from Zoccoli’s on Pacific Avenue. Son Andrew, now the store’s manager and vice president, recalls his parents “borrowing against gas credit cards to get enough money together to buy their first batch of materials for sale,” he says. “It was a true leap of faith.”
In 1972 they bought the property formerly occupied by El Dorado Meat Company at the corner of North Pacific Avenue and River Street. “We did a lot of scraping the walls, cleaning and painting,” Cynthia says, rolling her eyes. The store’s thick walls and irregular doorways are evidence of the frozen meat lockers of yore.
As the buyer for Lenz Arts, Cynthia had a vision. “I wanted the store to be like my ideal studio. It had to have everything I would want for any art project,” she says. Andy, armed with a deep background in no fewer than five artistic genres, also realized that “you either teach, or do an art store. Well, teaching didn’t suit me,” he confesses, “and we needed money.” Cynthia—a specialist in paper—did the buying, kept the books, and Andy did sales. “I’m a good salesperson. I sold popcorn in the fourth grade,” he grins. “We learned early on to listen to our customers. We wanted to fulfill their needs.”
The Internet? “They’re just another competitor to us,” he says. “Before that, it was catalog sales.”
The couple’s art-school background inspired their inventory. “When we first opened we showed people how to use everything.” The full-service art store even offered fine-art framing. “Professionals, amateurs, students, people come here from as far away as Ashland. And Monterey. And Texas,” Andy says.
“We have survived fire, earthquakes, embezzlements, and roadwork,” they both chime in. They also survived a few experiments in expanding the business to other markets. “We’ve seen plenty of changes. Letraset went out. Layout materials went out when computers came in. We were pushed to diversify.”
But the location wasn’t ideal, they note, laughing. Lots of bars, no retail trade, a big PG&E tower. “But we own the building, and even more importantly we own the parking lot. People can just zip in and zip out with what they need.”
The couple’s son Andrew—the eldest of five children—has managed Lenz for many years now, working with graphic artist Louise Leong as assistant manager and Lily Bromberg as buyer.
“Andrew’s great—he’s a people person and used his UCSC degree in computer science to bring us into the computer era,” says Andy, who officially retired in January, just in time to go to the Houston conference.
“I’m thrilled about the award,” says Andrew. “They’ve worked really hard to create this thing known as ‘Lenz Arts’ to meet the needs and desires of local artists.”
I ask Andy what he thinks the best part of his work is, and, without hesitation, he looks at his wife and says, “Cynthia!” In his spare time, Andy gives pop-up art demos in the shop, paints and draws in his home studio, and bakes legendary mixed-grain muffins. Cynthia enjoys her many grandchildren. Freed of six-days-a-week retail obligations, the founders are still hardwired into the Lenz Arts business. “It’s our baby,” they say. lenzarts.com.