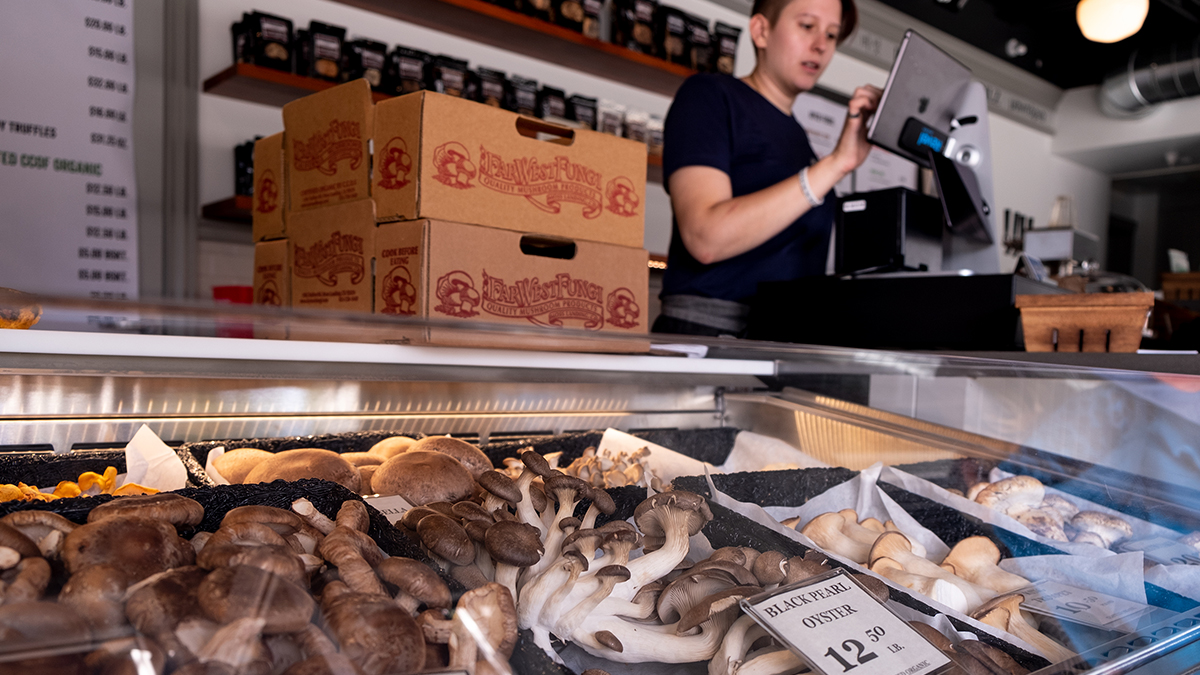 It is both of those things, but it’s more about stepping into a devoted subculture of fungi aficionados.

The family-owned mushroom company’s Laurel Street storefront, which opened on Oct. 12., is full of jarred specimens and scientific posters reminiscent of an apothecary. On one wall, tinctures of Cordyceps and Turkey Tail that promise to boost energy or the immune system are neatly arranged alongside mini-fungus-farm kits.

The centerpiece is a deli-style counter that showcases the dozens of mushrooms Far West sources from around the world or grows at its farms in Moss Landing and San Martin. They range from $3-a-basket Wood Ears to Black Pearl Oysters, Shiitakes and King Trumpets, all the way up to imported $31-an-ounce Burgundy Truffles.

“Let me show you something crazy,” says Ian Garrone, who owns Far West Fungi along with his parents and three brothers. He reaches behind the glass and pulls out a model of a brain made from white mycelium, or the base element of fungus. “Our farm did this for Halloween.”

The decor is just one of many eccentric touches in the store, where the cash register is flanked by candy cap cookies ($2) and Shiitake jerky ($8)—two examples of a bid to creatively counteract phobias of slimy or otherwise alienating textures.

“It’s the gateway mushroom,” Garrone says of the jerky, which is peppery, smokey and only slightly chewier than meat alternatives like turkey jerky. “All these great things that mushrooms have to offer, we’re kind of hoping to facilitate that.”

Santa Cruz may seem like an unlikely expansion market after Far West’s flagship store in San Francisco’s Ferry Building. But Garrone says there was good reason to move here instead of bigger cities like L.A., New York or Seattle. For starters, he’s a long-time participant in the annual Fungus Fair put on by the Fungus Federation of Santa Cruz.

“This community is so into mushrooms,” Garrone says. “We really would like to be a resource for others.”

At the end of the shop’s sleek counter, a few visitors last Friday afternoon sampled a café menu of prepared items that range in umami intensity, from entry-level mushroom avocado toast ($7) to a seafood-less Lion’s Mane lobster roll with enough funk to make up for the missing crustacean ($10).

The recipes have been developed over more than 30 years, since Garrone’s parents—his father a retired police officer and mother a former school teacher—started growing mushrooms as a hobby with a business partner in Moss Landing during the ’80s.

Through Bay Area farmers’ markets, deals with specialty grocers and online sales, the operation has grown significantly in recent years. Far West Fungi now has 60 employees and produces 40,000 pounds of mushrooms per week, Garrone says, but there are still plenty of cousins and other family members involved.

“My grandmother was still doing farmers markets like a year ago,” Garrone says. “My parents still do a couple of markets a week. They’re in Japan right now at a mushroom conference.”

With the Santa Cruz store, he also sees an opportunity to supply new and existing restaurant clients, such as the San Francisco transplants behind new local tapas restaurant Barceloneta.

“We’ll do pop-ups and other events,” Garrone says, in part to showcase fungi as a sustainable alternative to meat. “A big part of it is really kind of trying to raise the level of the mushroom scene around here.”