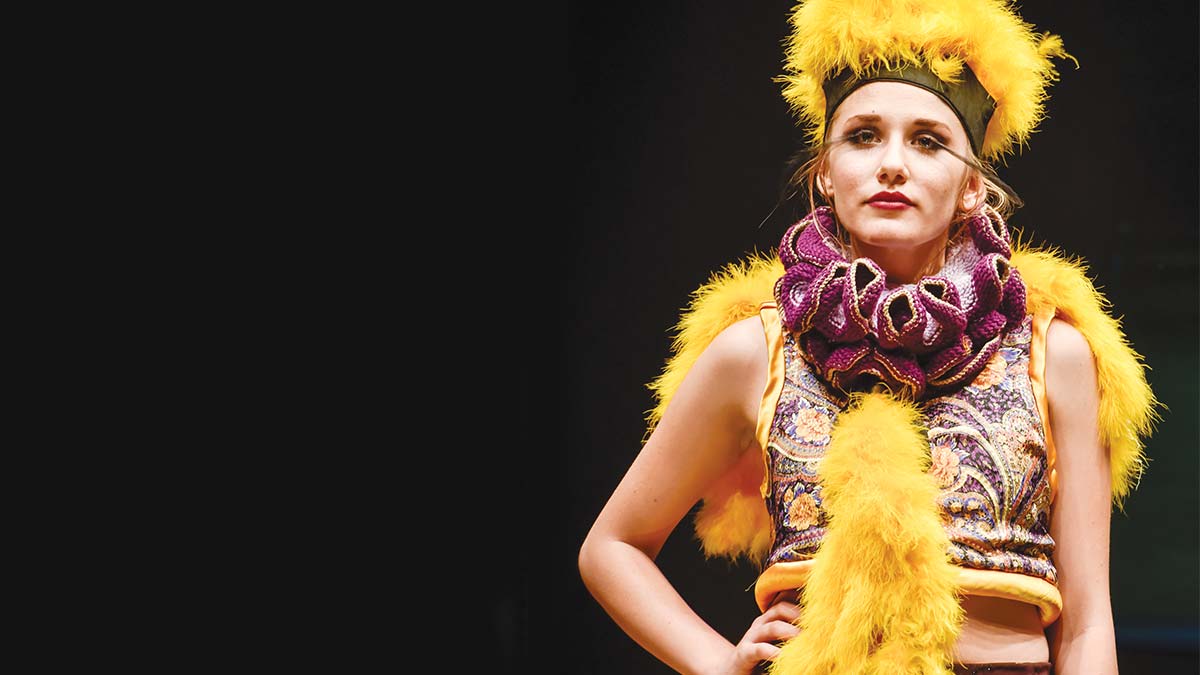 Now in its 11th year, FashionART, which takes place at 7 p.m. on Saturday, Sept. 24, has established itself as a permanent fixture of Santa Cruz culture—a place where emerging models, artists and local legends like the Great Morgani emote, evolve, and, in many cases, form the foundation of their careers.

“The months leading up to FashionART are like a crescendo of excitement,” says founder Angelo Grova. The event, which packs the 1,800-capacity Civic Auditorium, is now one of the biggest events in town.

“And it gets bigger and bigger every year,” says Grova.

GT spoke with Christina Morgan Cree, this year’s new design coordinator, who, at 41, returned to design work after retiring from her craft for almost a decade—and whose soda-can-ring gown not only dazzled the FashionART audience of 2011, but was also selected by French haute couture designer Jean Paul Gaultier in a contest to be part of a gala at the de Young museum in San Francisco. Since then, Cree hasn’t looked back; she’s established her own line (see christinamorgancree.com), and has participated in countless runway shows—including FashionART almost every year, and joins this year’s installment with both a wearable art piece and a design line.

How did you get into the world of fashion design?

CHRISTINA MORGAN CREE: Well, I started when I was probably two or three. As soon as I could draw, as soon as I could get my hands on fabrics, this is what I was doing. And it was really a lot of sort of the 18th-century kind of French Court look, that was my thing for a long time, and I still love the panniers, the big side things that stick out, and you’ll still see that in some of my work. So I am very self-taught. I had a teddy bear named Corduroy, after the book Corduroy, and he was my model for many years, he would wear the dresses I made. We did not have a lot of money; I grew up on food stamps in a very poor neighborhood in San Jose, this is pre-Silicon Valley. So whenever I could get my hands on fabric, whenever someone would just give it to us, I loved it. I learned all by hand. I would design costumes for the neighborhood kids, and I was really into space and The Jetsons, and I would have all these adventures with our decorated refrigerator boxes in our courtyard, and I would make space clothes and Halloween costumes for all of them.

You took a long hiatus from fashion design while raising three children—aside from a few wedding dresses and Halloween costumes. In 2011 you designed a gown of plastic soda rings for FashionART that not only appeared on the 2012 FashionART posters, but was also selected by Jean Paul Gaultier in a contest at the de Young museum. Did that feel like a sign that you needed to keep doing design?

In the Bay Area there are a lot of experienced and talented people submitting stuff. So that was really cool, I got to go there and I got to briefly meet him. I’m just super thankful that [FashionART] took my scratchy pencil sketches, and kind of cracked open the door for me, which led to a lot of other stuff. Yes, it was definitely validating, and I don’t think it sank in for months or years. Because you sit at home, and you’re making this stuff, and there’s just a lot of you in there, and it can be very vulnerable to put it out there in public. So, coming into it as a 41-year-old, and having not done all the design that I thought I was going to be able to do for decades, it was really wonderful.

Do you consider your soda ring dress, or some of the other pieces, like the candy-wrapper dresses, a statement about consumer culture?

I’m a big recycler, and I recycled in Santa Cruz years before they did curbside recycling. We’d lug all of our stuff in the car to recycle it because we just felt strongly about that. So, my dress didn’t have a direct statement, but I would say it definitely represents who I am … There are pieces in FashionART that have been very direct statements on the environment and using recycled materials, and salvaging. Lisa Bibbee, her design line last year was entirely repurposed, upcycled fabric. And a lot of people save and reuse. And so some people definitely do have very environmental statements on the runway, and that’s very intentional.

It’s going to be very multicultural. We’ve got two different designers that grew up in Africa, and they’re bringing their whole kind of integrated culture into their stuff, and it’s just wonderful, and it’s different. We have four designers who are really bringing their own backgrounds of their ethnicity and their growing up, their cultures, and colors to their lines. One of them opened the show last year, and she’s going to be there again this year. One of the designers is doing this really wonderful themed design line with headpieces. It’s going to be gorgeous. And we have a lot more men this year, so that’s exciting. We have a men’s designer, who just showed at Mercedes-Benz New York Fashion Week—Ben Ellis.

Many of the pieces showcased at FashionART are so beautiful, but also a bit crazy as far as street clothes go. Do people actually wear these pieces afterward?

I can speak for me and some of the wearable artists. They do go into other exhibitions. Some of my stuff’s been in the Richmond Art Gallery, and at the MAH, and I get asked a lot for my wearable art pieces for models and photographers to do photo shoots.

Santa Cruz doesn’t necessarily have a reputation for being fashion forward. Do you think that FashionART is changing that, proving that we do have an edge? Would you say that what we’ll see is what we can expect to see for Fall?

Well, from what I’ve see in stores so far, I would say my line this year is probably more of what you’ll be seeing this fall. But FashionART is more about a platform for new and emerging designers, and, you know, there’s so much out there now. I would say FashionART does reflect the community’s fashion sense in that it’s really individualistic, and it’s very much from the heart of the person, and there is a lot of non-conformity spirit there. And just showing what you are, who you are, what you are uniquely bringing that nobody else can. Because there will be amazing talent, and new and better and whatever, but what makes you as a person stand out is your perspective, your history, and what you uniquely bring to something, and that’s what I really love seeing come out.

It’s interesting to think about how the technological aspect of design has changed fashion, because most people are designing with computers now.

Yeah, that’s a good thought. I wonder how much that has lent to the flooding of the market with so much—you’re just inundated now with “new and different,” and it’s always changing, but it’s almost too much.

So then is the question ‘what’s new for fall’ kind of obsolete?

There’s always something new, but even when they come out with the Pantone color for the year [2016 is, for the first time, a blending of two colors; rose quartz and serenity], I don’t necessarily see that color.

Do you have any advice for beginning designers?
I think what’s great is there are so many platforms now to sell. You can even sell through Facebook now, and of course Etsy. And there are a lot of boutiques locally that are open to taking one-of-a-kind things. When I was going to school, going into the fashion design business, you were groomed to work in a bigger company—say Old Navy, or Esprit back then was still a thing in San Francisco. You were groomed to be the one who was doing, say, the pockets on shorts. You were part of a whole company. But what I like now is that you can start small and work for yourself. There are street fairs and a lot of pop-up shops now, like in Valley Fair Mall and in downtown San Jose. You can do a small little shop that’s like a booth almost, and you pay for your spot there, and you don’t have to maintain a space in the mall, but you’re getting all that traffic coming by. There are so many ways that you can get your stuff out there now, and you don’t have to put this huge financial investment into it, that maybe you don’t have. So for young designers, I would encourage them to take advantage of all these things that we have. Fashion shows are a great way to get pictures and publicity. You’re not necessarily going to make a bunch of sales from a fashion show, but I get more custom work from fashion shows. Also, you have to be a little thicker-skinned and realize you will get nos, and you will get rejections—but take it with a grain of salt, and look for where you can improve, and really believe in yourself.

You’ve been involved in FashionART since the beginning. Do you see it evolving, or moving in any particular direction?

To me it gets better and better each year, from what I’ve seen, and it steps up in sophistication, year to year, and yet it’s still extremely inclusive. There are still models of all sizes; we have a lot of great models who have a lot of experience, and they are your 5’9” and up and size 2-4, so we’ve got those models. We’ve got the professional hair and makeup, we’ve also got short models, we’ve got models of all shapes and sizes. I go back and forth depending on my line if I use model-looking women or normal-shaped women, and I love doing that. So I feel like it’s becoming more professional looking and yet it’s not getting detached from its original purpose, which is that it supports the community and the arts and foundation and fashion teams, and it’s very supportive of artists like myself.

And a lot of these artists are working all year long on their lines for FashionART?

Yes, there are some that work all year. We always have some designers where this is their first time putting together an entire line, and really putting their heart and soul into it. And it really takes a lot out of you. Jill Alexander has gone international with stuff, and I believe FashionART was her first runway show, and she started with plus size and now she does all sizes.

You’ve done shows around the Bay Area but you say FashionART is easily your favorite. Why is that?

First of all, you’ve got this venue that holds just so many people, and most fashion shows can’t seat that many people—and then people are just really happy to be there, it’s just the best audience. So you go out on stage and it’s a nearly 50-foot runway, and you are literally on your own, thrown out there. There have been a lot of first-time models, and this is the first time they’ve modeled in these high heels on this huge runway—very intimidating. But the warmth and the support and all the love you feel, I mean it’s just great. Everybody loves doing it, everybody comes away from it saying they loved doing it.

Previous ArticleShould Edward Snowden be pardoned, or should the government throw the book at him?