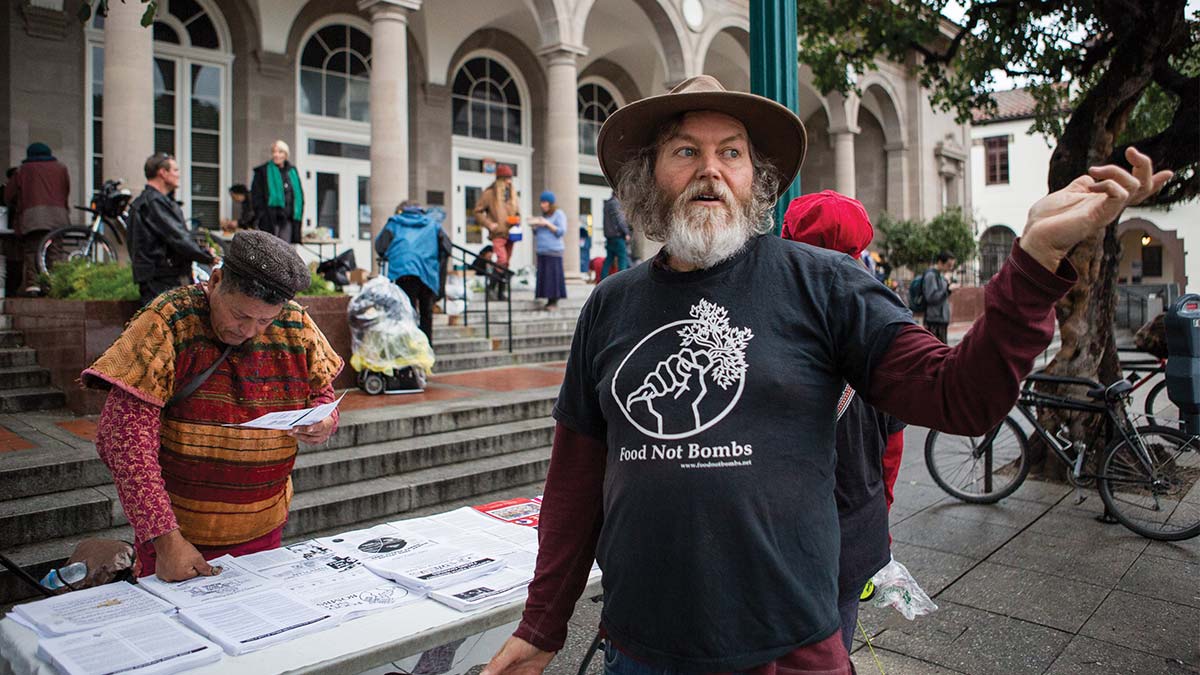 More than two years ago, Santa Cruz city officials painted 61 color-coded spaces on downtown sidewalks—yellow for performers, red for vendors, and blue for both—in response to complaints from downtown business owners and shoppers.
The plan was largely seen as a compromise between locals who wanted a quieter downtown and artists who were tired of getting busted for breaking loitering laws, having not known where they were allowed to set up. Then, last year, after the Santa Cruz City Council voted to remove half of the spaces, local activist and co-founder of the international group Food Not Bombs Keith McHenry decided to protest. One night in August, he repainted the boxes that the city had removed.
“I decided I would do it without hiding,” McHenry says. “I’m publicly saying I’m against the policy. Put back the boxes and encourage more artists to flourish on Pacific Avenue.”
McHenry, who’s 58, is now facing charges of felony conspiracy to commit a crime and felony vandalism for his November arrest.
McHenry paid his $5,000 bail. “The main thing is that I wanted to give hope to the people on the street, that it would empower them to stand up for their rights, and I think that really happened,” he says. “People really got excited. They had been getting depressed.”
Two months later, while protesting with the Freedom Sleepers, a group of homeless advocates who camp out in front of city hall, McHenry was charged with offensive words and failure to obey a police officer. While serving food at the October sleepout, he says he called a city staffer “chickenshit”—something he now regrets, he says, “because there’s really no sense in being negative.” Later, he allegedly jaywalked when an officer told him not to, which he denies.
“I perceived the removal of the boxes, the stay-away ordinance, and the cutting of services at the Homeless Service Center as being a widespread attack on low-income and homeless people,” says McHenry, whose next hearing takes place at 10 a.m. on Jan. 26.
Assistant District Attorney Archie Webber, who could not be reached for comment, offered McHenry a plea deal that would have dropped the charges if he pleaded guilty to vandalism. The offer included two months in jail and a year’s stay away from Pacific Avenue, but McHenry isn’t interested.
“I won’t take a deal that interferes with my right to protest,” said McHenry, who will represent himself in court.
His first hearing took place Dec. 8. Joining him was Abbi Samuels, an activist, member of FNB and his partner, who was with him during the blue box incident, although she says she did not participate. Vice Mayor Cynthia Chase attended the hearing, curious about their status.
“We’re trying to create a balance downtown between free expression and downtown business. This [case] brought attention to that,” Chase tells GT. She says the city manager’s staff is in the process of researching how other communities find this balance, and expects a report to the council by the end of February.

“I live very marginally, my personal expenses are about $500 a month. To make that, I speak at colleges,” McHenry says, sipping tea in the back corner of Saturn Cafe, his usual spot. “Anything after $500, I donate to Food Not Bombs.”
McHenry has written three books, his latest, The Anarchist Cookbook, teaches people how to cook affordable group meals with the purpose of feeding the hungry.
In 1988, McHenry says, the FBI classified him as a terrorist; they also classified Food Not Bombs as a terrorist group. The FBI told him it will review his case, he says, but that it would take 45 years. He considers himself a nonviolent person who was targeted for his activism.
It all started one day when, as a college activist in 1980, McHenry noticed a poster that spoke to him and changed his life. The poster read, “Wouldn’t it be a beautiful day if the schools had all the money they needed and the Air Force had to hold a bake sale to build a bomber?” The poster would help inspire the creation of Food Not Bombs.
McHenry and eight buddies bought military uniforms from a surplus store in Boston, and held a bake-sale, acting as generals trying to buy a bomber. The money went to a friend’s legal defenses, and it was largely successful. This bake sale held on May 24, 1980, is now celebrated by Food Not Bombs, which has since been recognized by Amnesty International for its work on human rights. At the time, McHenry was working at a grocery store and took the food daily to the housing projects in Boston.

McHenry moved to San Francisco in 1988 to start Food Not Bombs’ second chapter. He says he was arrested his first day for not having a permit for feeding people at Golden Gate Park.
He served a total of 500 days in jail between 1988 and 1995, he says, racking up 47 felony conspiracy cases. “Every time we would get arrested there would be more groups popping up,” he says. “It shocked people’s consciousness seeing and hearing about the police beating and arresting people for feeding people.”
Today, there are an estimated 1,000 Food Not Bombs chapters worldwide. The group has three principles that other chapters must recognize. The first is that food must be vegan or vegetarian and free to anyone drunk or sober. Second, there are no leaders or headquarters, and each chapter is autonomous, making its decisions as a collective. Third, members of the group do not consider it a charity, but rather a group dedicated to taking nonviolent action to change society.
“If you want to end hunger, rather than just feed people, it’s better to change the conditions and make a world where everyone has access to food,” he says.
McHenry had visited Santa Cruz as a young man, but chose to stay in 2013 during one of his tours of “Squash Hunger Smash Poverty,” where he met Samuels. He fell in love with Samuels and the community, deciding to make Santa Cruz home.
Samuels says she was impressed by his nonviolent creative strategies and attitude of never giving up the effort to make the world a better place. “He had this undeterred idealistic view of how much better the world could be,” she says, “if more money went to helping others instead of killing them.”
McHenry says that with his recent protest, he was just trying to support people whose voices may otherwise be forgotten along Pacific Avenue. “I did water colors out there in the ’70s. It’s such an artist town,” he says. “It seems like an effort to drive poor people out of town, and that’s where poor people make their money.”