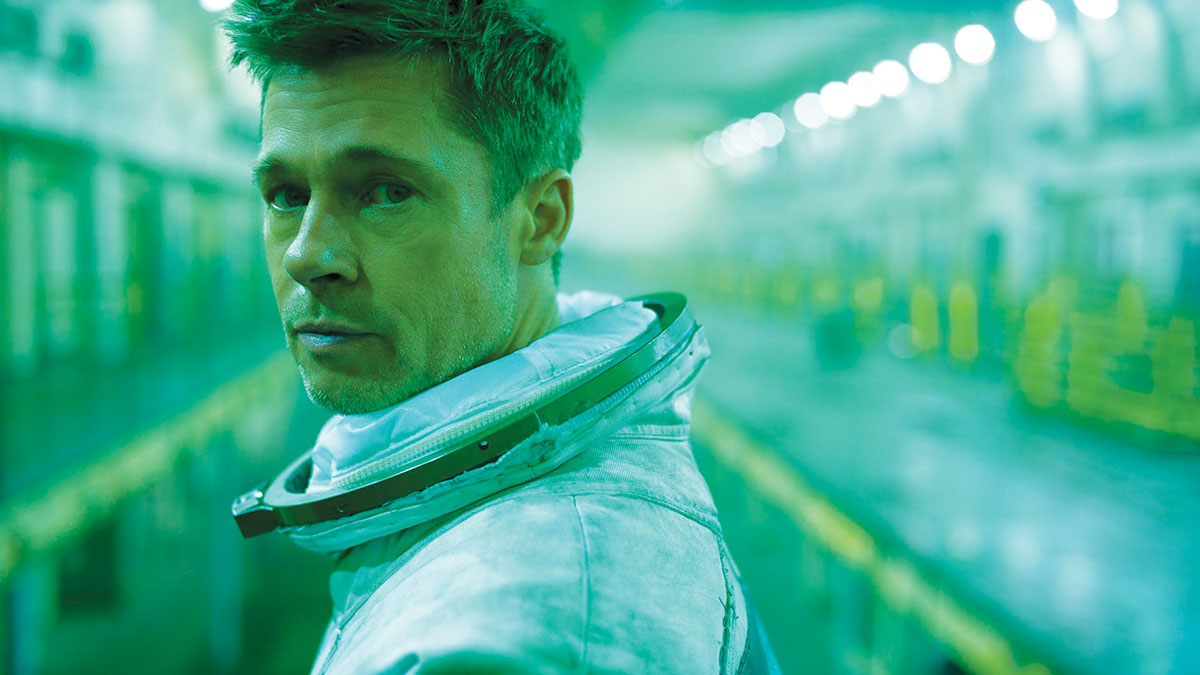 Director James Grey tries out a Terence Malick style in Ad Astra to crack the enigmatic calm of a Neil Armstrong type.

Brad Pitt, bewitchingly cool and handsome in a space suit, plays near-future astronaut Major Roy McBride. He is a famous man and a stranger to himself. In voice over, he muses over the lack of emotion that’s caused his wife (Liv Tyler) to leave him. He’s honored at Space Command for a resting pulse that never breaks 80. Roy is cool under pressure, even when he plummets from a stratosphere-piercing antenna, nearly blacking out before his parachute opens … and then the chute is pierced by falling debris.

Roy has one nerve, and the story twists it. Roy’s father Clifford (Tommy Lee Jones) was a renowned astronaut who abandoned his family on a mission. Though he never came back, Clifford may still be alive, living in Neptunian orbit; inexplicable pulses from that direction are zapping the earth, killing tens of thousands. Perhaps it’s from the anti-matter generator Clifford took with him into deep space. Has he succumbed to space madness? In one last gamble, the Command sends Roy to Mars to deliver a secret personal message to Clifford. They’ve pre-written it for him.

Heart of Darkness parallels increase as Roy approaches. As we hear in the endless and mostly redundant first-person narration, the moon has been turned into a tourist destination, complete with an Applebee’s and alien-masked buskers. Towering over the moon base is a replica of the cowboy Vegas Vick neon sign, the Las Vegas landmark. This is scolding stuff, compared to the fun Paul Verhoeven had with Mars as a carnival planet in Total Recall. A lunar dune buggy chase through the moon’s unpacified zones is interesting enough, but Gray’s not an action director. You know how Roy feels: it doesn’t raise the pulse.

In Mars’ underground tunnels, Roy meets an executive born and raised on the red planet; she’s played by Ruth Negga, togged out in a handsome set of black pajamas. Like Donald Sutherland, who turned up earlier as a wary Space Command officer, Negga gets dropped from the movie, perhaps for the crime of being too distracting from Grey’s fathers-and-sons thesis.

In the Belt, Ad Astra has a passage illustrating the matter of whether our species belongs off-world, through a fatal encounter with a floating lab doing experiments on animals. It’s similar to the business of the abandoned ship of feral dogs in Claire Denis’ High Life, where the fate of poor Laika the Soviet space dog was multiplied to a thousand. Ad Astra frets over the problem of human contagion of the pristine emptiness, of sending us apes where we don’t belong.

And like the bloody encounter with an ape in the abandoned ship, the most exciting moments are the most traditional science fiction movie incidents. It’s Roy breaking into a rocket from the outside just as the countdown from T-minus-10 has begun.  Later, in a haunted space station, some deceased crewman left the TV on, and it’s playing something strange and eerily beautiful: the Nicholas Brothers’ dance to “I Got a Gal in Kalamazoo” from Orchestra Wives (1942).

Gray endeavors to give this drama the sweep and detail of TV’s The Expanse. The over-explaining desiccates Ad Astra, despite both its 2-billion-mile scope, and Hoyte van Hoytema’s glowing photography. There may be a reasonable explanation for the constant comments, even at their most redundant. Roy sees a frightened fellow officer and thinks aloud, “He’s scared”—is Roy, then, like a man with Asperger’s, always having to read other people’s emotions?

Pitt’s humanity, so evident in Once Upon a Time in Hollywood, keeps one hooked through this. The lost-father drama can be tedious in the deftest hands. But this time, the celestial backdrop adds some allegorical freshness to the subject of fathers so obsessed with their business, so closed off from their families that they might as well be in ice-cold orbit around one of the outer planets. Jones is terrific at demonstrating that lack of regret, the inner deadness of one of these technical geniuses. But he also demonstrates flashes of the weakness and willfulness of a father on the edge of senility. Still, in the end, just like High Life, all Ad Astra can do is helplessly endorse the beauty and preciousness of Earth.