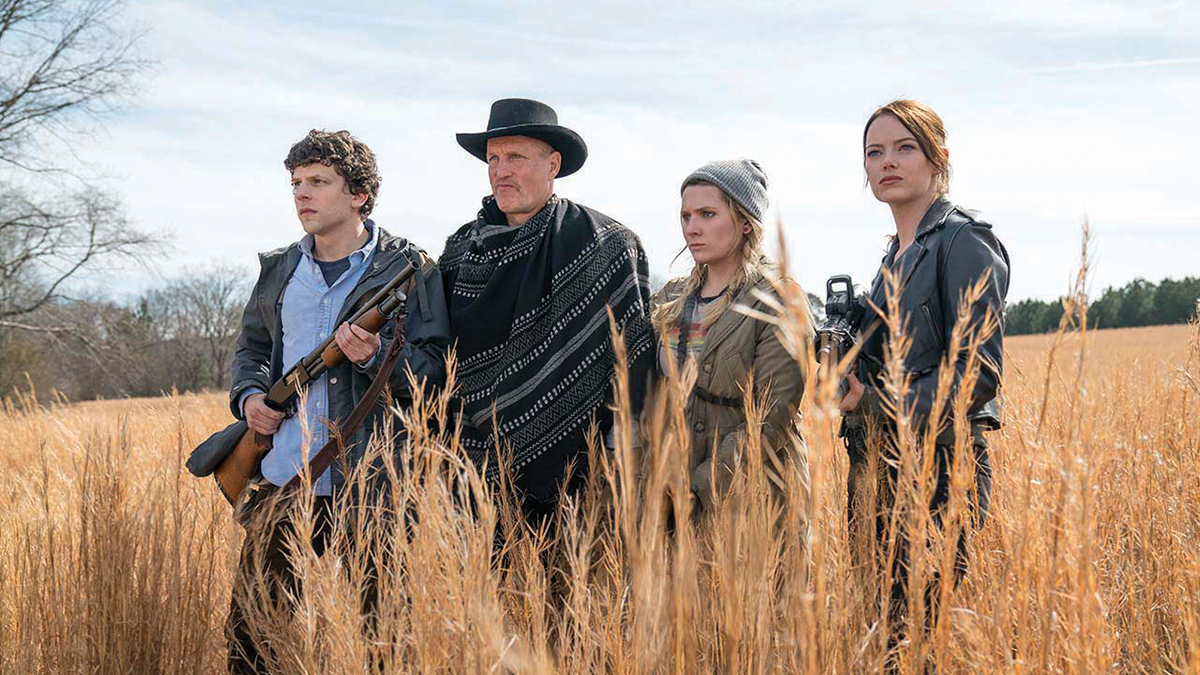 Zombieland 2: Double Tap has the soul of a shooter game.

It first reunites us with the four apocalypse survivors from the original film; now they’re not getting along, even with their fine new HQ at 1600 Pennsylvania Ave. The mad-cow-disease-ridden zombies have evolved into subspecies: plodding dumbos nicknamed “Homers,” and crafty “Hawkings”—as well as a new breed that’s super-fast and hard to kill.

Holing up in the White House, Tallahassee (Woody Harrelson) is happy to be the king of America, digging up such artifacts as the .45 automatic Elvis gave Richard Nixon (this time, it’s Elvis that Tallahassee is besotted with, not Dale Ernhard). Wichita (Emma Stone) can’t handle the nerdiness and neediness of Columbus (Jesse Eisenberg). Even if he is more or less the only man in the world, she can’t accept the Hope diamond he presents as an engagement ring. Interestingly, no one in the film seems to know that the gem is supposedly cursed.

The restless ladies steal “the  Beast,” Tallahaees’s antlered death truck, and race off for places unknown. The menfolk pursue. On their respective roads, the separated gangs encounter two new stereotypes: one is Madison (Zoey Deutch), a pink-clad and moronic blonde mallrat. Little Rock meets Berkeley (Avan Jogia) a Namaste-ing hippie who, now that society collapsed, can pretend he wrote “Blowing in the Wind.” Berkeley knows of a refuge called Babylon where people can be cool, vegetarian and nonviolent. It’s a tower-top fortress that once was a 20-story hotel; of course they eventually need rescue by a John Wayne-like figure who is no stranger to violence.

On first sight, Little Rock almost ‘murrays’ Berkeley—we learn that’s the slang for killing a human when you think they’re a zombie. (“Murraying” references the best scene in the first Zombieland, if you don’t count Little Rock’s impatient explanation about how Miley can be both herself and Hannah Montana. In that scene, Breslin made the post-apocalyptic drive across a zombie-blighted U.S. the same as any other family car trip, asking “Are we there yet?”)

Before the gang gets back together, there’s a detour to a pseudo-Graceland, a tourist motel run by Nevada (Rosario Dawson). Dawson’s million-candlepower smile is a glad sight in a sunless and sour movie. Here also is an expansion of a keen gag in Shaun of the Dead (2004), where the squad of survivors, crossing through the North London backyards, sees their doubles heading in a different direction on their own zombie hunt. Director Ruben Fleischer (who did the original Zombieland) spins this one shock of recognition into 15 minutes of deadzone yack. A macho Luke Wilson (as Alburquerque) bumps his cowboy-shirted chest against Tallahassee, while his sidekick Flagstaff (Thomas Middleditch) hangs with Columbus, comparing and contrasting their fussy rules, which appear in gold letters above them.

Those are the jokes, along with the alleged comedic-relief “Zombie Kill of the Week” awards, demonstrating creative way of mangling the walking dead. One, set in Italy, almost displays some wit while destroying a 846-year-old monument.

Nihilism and the movie’s referential mania wear you out. There wasn’t enough energy in the first Zombieland to channel into a sequel, and there was little left undone. Moreover, it hasn’t been 10 marvelous years of travelling that got us to this weedy Midwestern wasteland, with its ambulatory corpses spilling pixilated glore.

It’s natural that Zombieland: Double Tap gives all its characters capital city aliases. The film is the product of a pissed-off and divided nation which can view the mindless, useless eaters as symbols of either the Demon-craps or the Trumptards: zombies, fit for nothing but two in the skull.

Previous ArticleLoma Prieta: A Look Back