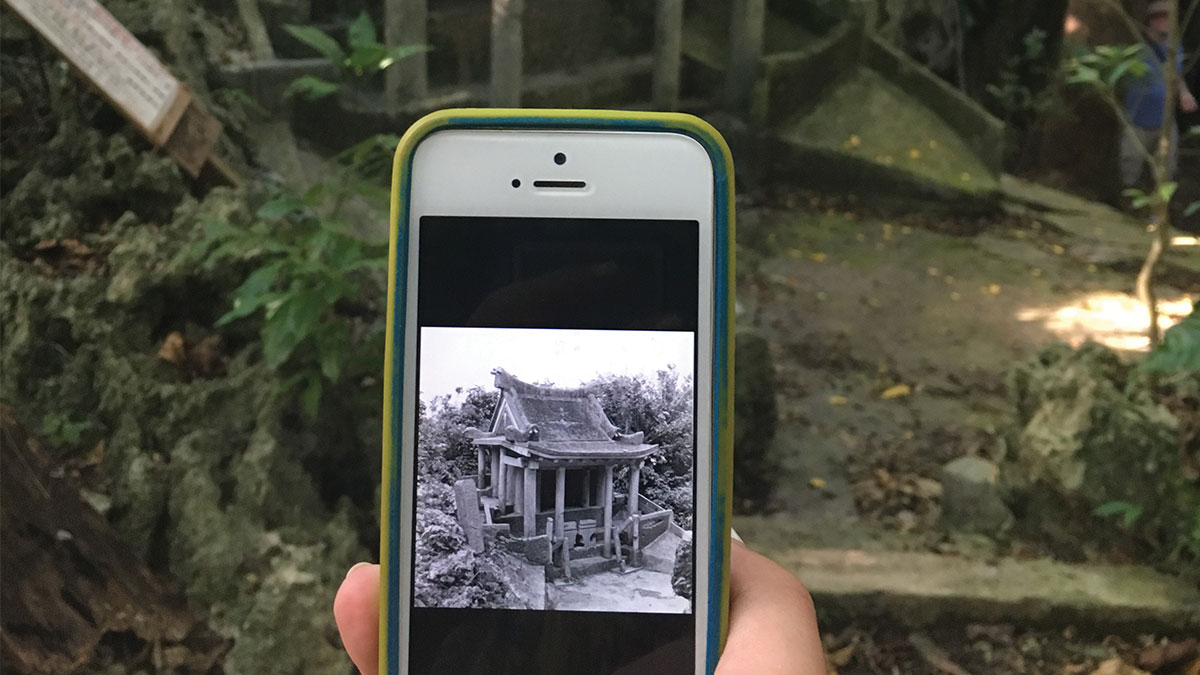 Such provocative images. So just where exactly is Okinawa?, I wondered, sitting with the maps and photographs Shelby Graham had brought to our interview. The name had always remained mysterious to me until I saw dramatic evidence of the island’s strategic location in the Pacific vortex between China, Taiwan, Japan and the Philippines. No wonder it has been the site of so much political rivalry and physical beauty throughout the centuries. An in-depth glimpse of the island’s legacy will be showcased with The Gail Project, an international history project exploring the founding years of the American military occupation of Okinawa after World War II.

“It started with a suite of historic photographs taken by [American Army Captain] Charles Gail during the Korean War,” explains curator Shelby Graham. This rare collection was generously donated in 2013 to UCSC Special Collections by Gail’s daughter, Geri Gail, a former UCSC staff member who believed the images would be most useful in an educational setting. But in order to yield an emotional connection with the old black and white images, Graham realized she needed context. Turns out that UCSC is that rare institution with an Okinawa specialist—History Professor Alan Christy—on its faculty. Christy recently took a small group of student researchers and faculty on a trip to Okinawa especially to re-visit those sites first captured by Gail’s lens. It was the beginning of fresh oral histories, discoveries, and an intensive program of searching out and re-photographing some of the iconic places Gail had originally captured. “Being in Okinawa in 2017 with this group was a profound site-specific learning experience,” says Shelby Graham, director/curator of the Mary Porter Sesnon Art Gallery. “We all witnessed and walked on landscapes simultaneously beautiful and brutal—it was unforgettable and timely, a research opportunity for all”

Christy is also The Gail Project’s director, and co-director of the Center for the Study of Pacific War Memories at UCSC. “One of the signs of the history becoming real is when it takes an emotional hold, whether that is excitement, joy, sadness, or anger,” he explains. “It also comes with gaining a sense of the place and space itself, which gives to them a deeper understanding of the complexity of any event, the way that many people and many forces can play out differently in a single space.”

Working with the Gail photos, “which show an Okinawa that is largely gone, but still has locatable traces, meant that the students became really close readers of the landscape, of exhibitions in local museums and of texts that they encountered,” he adds. Students discovered the locations of Gail’s original photos. “And that gave the background to the scene that was photographed by Charles Gail, and that meant that they were honing their skills of observation and connection.”

The upcoming exhibition will display an array of new color photographs alongside the older images of the same sites, plus oral histories and wall text. “Okinawa has had a complicated relationship with the U.S. military presence, and a blend of cultures, especially that of Japan,” Graham notes. “The exhibit is about learning history in a different way, exploring multiple perspectives and building a dialogue.”

And this is just the start, promises Christy. “We intend to travel the show from here to Okinawa and then to locations in the Okinawan diaspora, including (hopefully) Osaka, Hawaii, Los Angeles, São Paolo, and, possibly, Bolivia, before we return to Santa Cruz for a final show. And through our website, we hope to be building a growing archive of oral histories about the postwar Okinawan-American relationship.”

Intriguing and little-known history, alive and accessible, forms the heart of this bold international project.

Info: The Gail Project: An Okinawan-American Dialogue, opening reception is 5-7 p.m. on Thursday, Oct. 5. at the Gallery above the Porter College Koi Pond. Free and open to the public through Dec. 2. More info at art.ucsc.edu/sesnon.

Next ArticleHealth Officials Analyze and Respond to Hepatitis A Outbreak