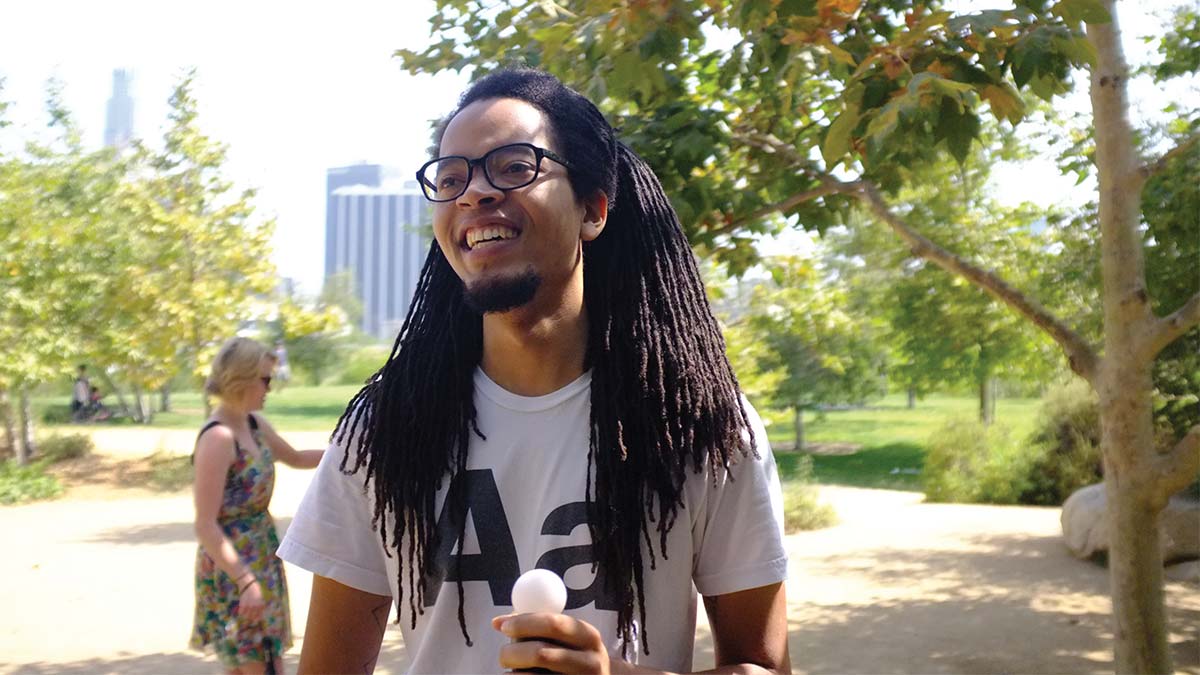 You’re out of shampoo. So you grab your coat and keys, and head down the street to the closest grocery store. Whether you end up safely back home, terrified in a jail cell, or zipped up in a body bag has everything to do with your race.
At least, that’s the premise of &maybetheywontkillyou, a game designed by Akira Thompson to shed light on what it’s like to be black in America.
Thompson, a UC Santa Cruz Games and Playable Media graduate program alumnus, took the name from over a dozen tweets sent by writer and activist Ijeoma Oluo in December 2014. Oluo’s dispatches came in response to the Department of Justice’s decision not to indict Darren Wilson, the police officer who shot and killed Michael Brown in Ferguson, Missouri.
“Don’t wear a hoodie and maybe they won’t kill you,” one tweet said.
“Don’t ask for help after a car accident and maybe they won’t kill you,” read another.
In Thompson’s game, the player experiences the trip to the store as a young, poor black man. Walking down the street, someone locks their car door as you, the player, walk by. A cop car slows down and shines its light on you. In the store, the store owner follows the character down every aisle. In every situation, the player has the option to say something, in which case the scene could dramatically change and end with the police. Or they can choose to “say nothing” and watch their “Frustration Counter” go up and up.
“That frustration—it can only be pushed down so far until it explodes, and the further down it gets pushed, the more crazy and huge the explosion will be,” says Thompson, who is African American.

Thompson channeled his skills into something that could create empathy in people who may have never experienced racism first-hand.

UCSC literature professor Kimberly Lau says Thompson’s game forces people to understand what it feels like when frustration over racism starts to snowball.
“What is it like, that burden of people constantly being vigilant around you—always being under surveillance, unable to speak against that system?” says Lau, whose recent work includes examining masculinity in the popular “World of Warcraft” game.
Thompson formulated the idea for &maybetheywontkillyou the day that his professor, renowned game designer Brenda Romero, showed the class her board game “Train,” which has never been available for sale and explores complicity in horrible crimes. In it, players have to put as many people onto a train as possible. It isn’t revealed until the end that they’re being shuttled to a concentration camp.
That day in class was the same day the court decided not to charge Wilson in the killing of Michael Brown.
“It didn’t feel like justice was being properly served. It didn’t feel like the problem was being addressed in a meaningful way,” says Thompson, who recalls many of his Facebook friends worrying about the rioting and destruction in the aftermath. “When people riot, that is a long-term build-up from some issue that isn’t being addressed, and people feeling so disempowered and disillusioned that they feel like they have no other recourse.”
Thompson channeled his skills into something that could create empathy in people who may have never experienced racism first-hand. To play the game in person, the player must wear a black hoodie and hold the Frustration Counter. A moderator holds a large binder, called the Resolution Penal Code, and asks the questions.
A similar online model, available on Thompson’s company website, Rainb.ro, features simple black letters against a white background.
Thompson has presented the in-person version of the game at the Electronic Entertainment Expo (E3), the International Festival of Independent Games (IndieCade), the XOXO Festival and a handful of others.
Reactions to the game, Thompson says, have differed depending on race. Sometimes he’s met with staunch disbelief, he says, because these people live so far removed from his world that it’s difficult to grasp. He’s got the numbers on hand to back him up.
An analysis by the ACLU of New York City’s stop-and-frisk policy found that nine out of 10 New Yorkers stopped were innocent, according to the NYPD’s own reports. Fifty-four percent of those stopped were black, according to the same report.
According to a Washington Post investigation, 990 people were shot and killed by police nationwide—9 percent of them were unarmed. Whites made up 50 percent of the people who died, and African Americans, who account for 13 percent of the country’s population, made up 26 percent of the total group.
Thompson grew up across the river from Matt Hale’s white supremacist World Church of the Creator in Peoria, Illinois, where he and his siblings and a couple of other kids made up the school’s entire black population, he says. Luckily, he managed to avoid blatant or extreme racism outside of microaggressions.
After high school, he enrolled at Columbia College in Chicago and served in Iraq before working with Seamus Blackley, one of the creators of Xbox, at the Creative Artists Agency, and later as a production coordinator at Walt Disney Imagineering. Disney’s resources were ample, Thompson says, but after a while he wanted to create something of his own, and dove into USC’s Cinematic Arts department in Los Angeles before making the move to UCSC. Thompson was drawn to Santa Cruz because of Romero and her husband, John Romero, who were both professors in the digital media department at the time.
Thompson’s newest release, Stop! Thief! was recently made commercially available on iPhone systems and explores how crimes like robbery are perceived when compared with major white-collar crimes. The larger the scale, Thompson says, the less likely the person is to serve time.
Lau, who was excited to read about &maybetheywontkillyou, but has yet to play the game herself, says that society’s inequalities were carved out of a history of white supremacy, and that’s what his game conveys.
“He’s using the fact that games have a structure to get at the fact that racism also has structure—that there is institutional racism that operates through certain rules, maybe unspoken, maybe unknown or unfair,” Lau says.
Those structures reach deeper than day-to-day encounters, says Thompson. “It goes to believing it,” he says, “having self-worth issues and thinking, ‘Well, society views me this way and everything in society is telling me that this is my value, so this is my value.’”

Previous ArticleWhen it comes to finding a mate, what’s a total deal maker?