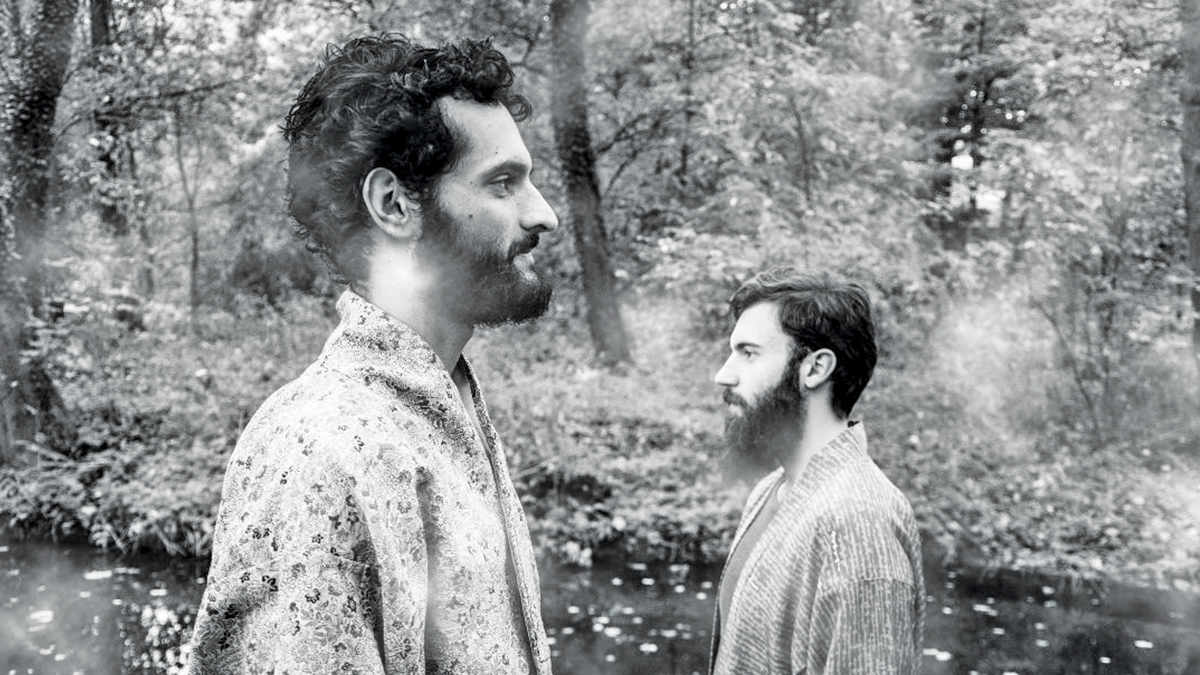 Dillon Baiocchi recalls a gig where everyone in the crowd was lying down as he and his fellow Hermano bandmate Michalis Michailidis created soundscapes in the middle of the room. The floor was draped in blankets and rugs, and the mood was transcendental, almost meditative.

What struck Baiocchi was how he could watch everyone transition back to reality after their hour-long set.

“Everyone’s quiet for a minute or two,” Baiocchi says. “It’s cool. It’s like slowly reawakening or something.”

Not every Hermano set inspires the entire crowd to bypass all social norms and engage in public napping, but they do generally take the audience on a journey. The duo’s music isn’t structured like standard pop, with repeating verses and choruses, but rather like musical journeys with slow builds and eventual transitions.

“I feel different from the gigs I played with past bands,” Baiocchi says. “This is like you created something beautiful and maybe meaningful. It feels really good to play.”

The previous groups that Baiocchi has played in are primarily jazz. In fact, when he was a high schooler he played in the Kuumbwa Honor Jazz Band here locally. Eventually he moved to New York to study jazz, and then returned to Santa Cruz where he was the director of the Kuumbwa Honor Jazz Band for a few years. He moved to the Netherlands in 2016 to go to grad school, continuing his jazz studies. Later that year, he started Hermano with fellow jazz grad student Michailidis. On March 29, the duo will play their first ever show in Santa Cruz.

For both students of jazz, the simple melodies and soundscapes of Hermano was an entirely different kind of music to be making. Everything Baiocchi had done up to that point was not just rooted in jazz, but more often than not was focused on extreme technical difficulty.

“There’s a lot of pressure when you solo to show off what you can do,” Baiocchi says. “When you play soundscape music, the goal for us is to create a sonic space for us and the audience to just relax into and transport ourselves somewhere else. It’s not about what I can do, it’s about how we can make a sound and space together for everyone to connect in.”

The collaboration started between the two of them after some conversations revealed that they had similar musical interests outside of the jazz they were studying. Groups like Sigur Rós were at the top of their list, along with film score music.

“We’re both getting our master’s, and I think we were getting tired of studying the way that most jazz people study, learning scales, licks and patterns, and all of these really complicated things, which are really challenging to play. But we wanted to make things that we’re a little more musical. We were trying to explore that,” Baiocchi says.

In Baiocchi’s early years, he had been more of a jazz traditionalist, which is precisely why he moved to New York and then the Netherlands to study music. Gradually, his ideas about the kind of original music he wanted to play began to evolve. But his background in jazz came in handy, and he didn’t approach soundscape music in an entirely different way. He and Michailidis utilized the skills and musical phrasings that they’d studied so hard in school to create this music. The school encouraged it.

At this week’s show in Santa Cruz, the band will be playing music from their full-length album, North of the World. The record allowed them to really showcase the unique experience that the music creates, as one song blends into the next. In fact, they tell friends that if they are going to listen to it, they need to set aside time to really take it in as a full experience.

“With the music I’ve been making before, you can just put it on in the background,” Baiocchi says. “This is like—it’s really cool to get into it. We kind of zone out and then we realize we’ve been listening to this already for a half hour. It’s kind of a different listening experience.”