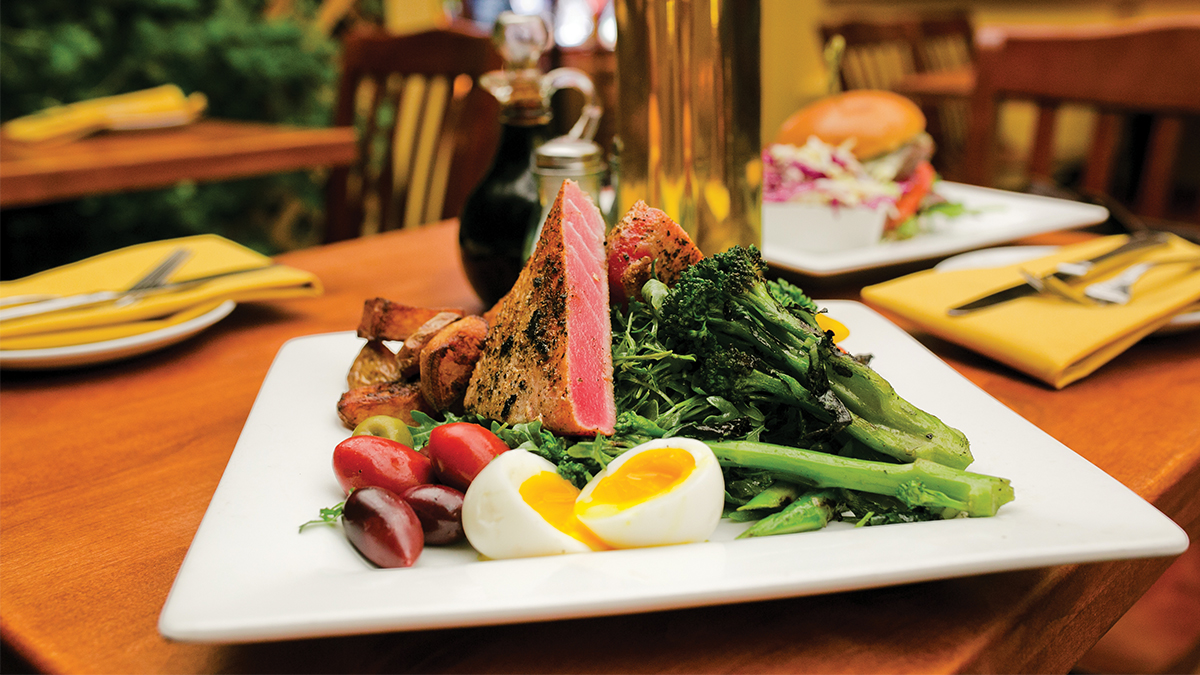 I never realized just how life-altering a seriously great dish of coleslaw could be, until I tasted the gorgeous thicket of mixed cabbages (long on the ruffly Napa variety) that came with my burger last week. I was at Cafe Cruz, embraced by the coziness that this warren of rooms, patios and nooks creates. How can a place that serves so many patrons feel so intimate? Jack felt the same way, and quickly got absorbed in studying the vintage mural by Terry Wells that lines the main dining room. Two bars, two outdoor patios, plus various dining areas—one with flat screens, the other with linen tablecloths. And once seated, you immediately forget that 41st Avenue is just outside the front door.

I had ordered the house burger—the Cafe Cruz Burger (1/3 pound) for $9.50, a stunningly perfect version of the American classic. Arriving on the pink side of medium rare, just as I had hoped and asked for, the plump burger of grass-fed beef was topped with melted cheddar, a ripe tomato slice, shaved romaine and a thick schmear of mayonnaise (a cultural oxymoron if ever there was one). I could have had fries, but was delighted that I’d chosen the cole slaw. The slaw was phenomenal, at once creamy, tangy, and subtly sweet. The burger was crowned by a brioche bun that was the apotheosis of buns. (Make of that what you will.)

Jack ordered one of the specials, a Niçoise salad highlighted by two slices of seared Ahi (of epic proportion!), with a pretty soft boiled egg, crisp slabs of excellent roasted potatoes, the mother of all dill pickles, and assorted decor in the way of roasted asparagus, broccolini, olives (two kinds, and lots of them), plus a little arugula salad in the center that could easily have been a star in its own show. The Ahi special was so large that much of it became part of dinner later on. And it was priced accordingly at $18. Frankly, it was larger than it had to be. It would have been easier to finish in one sitting had it been a smaller creation, and perhaps priced a few dollars less. Just a thought. With our lunches we split one of those slender bottles of Voss water in a cucumber lemon flavor ($4). I love that cucumber is having its moment as a botanical companion to libations, as well as salads. Non-cloying, it has a fresh, elusive flavor and pairs nicely with almost anything except chocolate. Thank you chef-owner Steve Wilson for keeping a grand old tradition alive and well (remember the old Grape Steak?). And delicious. Cafe Cruz is at 2621 41st Ave., Soquel. Open 11:30 a.m.-2:30 p.m. Monday through Saturday; dinner from 5:30 p.m. nightly, and from 5 p.m. Sunday).

Kudos, once again, to David Kinch of the celebrated three-starred Manresa. Kinch is currently one of five finalists nationwide for the “Outstanding Chef” award given annually by the James Beard Foundation. Fingers crossed—the award will be announced in May.

Appetizer of the Week

Is there any better partner for that cucumber (see above) and gin creation so effortlessly created at the bar of Oswald, than the little plate of ahi and avocado on crostini? ($8). Crunch and softness, a hint of wasabi, the earthiness of avocado, the sweet freshness of bright pink ahi tuna. So satisfying is this little morsel—beautiful too—that I did not need to covet my neighbor’s sliders one bit. Well, maybe one bit. But that was all. Oswald was a particularly apt spot for St. Patty’s day. Make a note for next year.