.How Much Has Santa Cruz County’s Water Supply Improved? 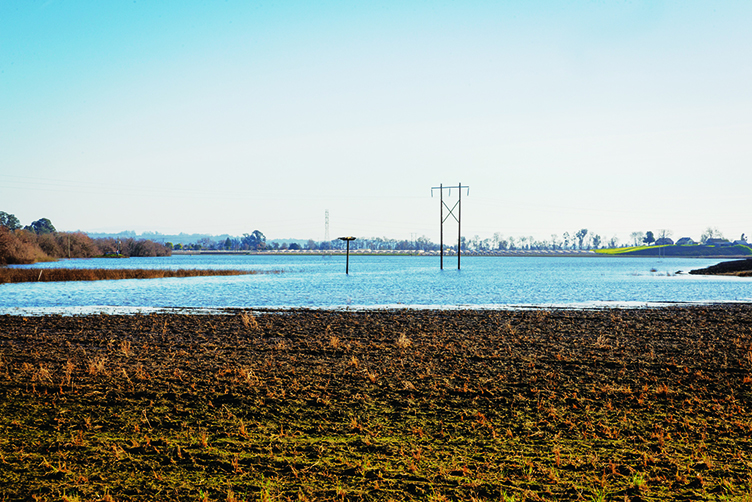 The first rain storms of winter brought more than just moisture. With them came a chance to raise local water levels in alarmingly low aquifers and reservoirs. They also allowed water agencies across the county to put new sustainability projects—like injecting stormwater into underground aquifers—to the test.

“At least we know that it does rain in California,” jokes Brian Lockwood, the general manager of the Pajaro Valley Water Management Agency (PV Water). But the drought isn’t over yet.

“I think that it’s easy to get a couple of big rainstorms and think we’re out of the woods,” says Lockwood. “But the truth is we’re not.”

“The drought isn’t over,” she says. “But this has been a really important respite and has provided much-needed water supply.”

Loch Lomond, which serves as the City of Santa Cruz’s primary water storage, dwindled to around half-full in the fall. It now sits at about 82% capacity.

The rains also added enough water to streams to allow migration events for fish. This is particularly important for steelhead and coho salmon.

“At the moment, the stream-flows across the county are basically right at average for this time of year,” says Ryan. This is enough to kick water storage projects around the county into action, but not enough to put minds at ease. It hasn’t been enough rain to compensate for the previous dry period that we’ve been experiencing—not just over the last couple of years, but for the last decade and beyond.”

The county will soon begin a drought mitigation planning process for small water providers and private wells. The planning, required by state Senate Bill 552 in September, aims to protect water providers with under 1,000 connections.

Santa Cruz County will focus specifically on systems with 15 or fewer connections and individual wells. These plans will work in tandem with larger municipal programs around the county.

“The projects being done are being planned in response to changing climates and rainfall patterns,” says Ryan. “And I think it’s really important for the community to be aware that their water agencies are working hard and working collaboratively.”

At the city level, the winter storms provided a chance to scale up the Aquifer Storage and Recovery (ASR) project. This City of Santa Cruz project treats excess stormwater runoff and uses wells to inject it into an underground aquifer. The water can then be extracted during drier months.

“Reliability is what we need,” says Heidi Luckenbach, deputy director of engineering with the City of Santa Cruz Water Department. “And for us, that largely has to do with diversification of supply, but also additional storage.”

The city conducted low-volume pilot testing for the last two years at two wells in town. They focused on water quality and overall feasibility. Within the last few weeks, the project entered the demonstration phase. Now the same two wells pump higher volumes of water into the ground to mimic a full-scale operation.

If the demonstration goes well, city officials hope to expand to up to eight wells in the next few years.

“We are trying to design and construct to meet our needs, but recognizing that our real driver now, it’s not growth. It’s not necessarily curbing demands. It’s really about, ‘What does the climate have in store for us?’” says Luckenbach.

The City of Santa Cruz Water Department uses almost exclusively surface water, but it shares the Mid-County Water Basin and an inter-tie with the Soquel Creek Water District.

The basin is critically over-drafted, meaning that people pump water from it faster than it naturally replenishes. As the underground water level drops, saltwater seeps into the basin in a process called seawater intrusion.

Through the Pure Water Soquel project, recycled water that would otherwise go to Monterey Bay will get treated and reused.

The recycled water will first flow through a new section of the City of Santa Cruz wastewater treatment plant. After treatment, it will pass “purple-pipe” standards for use at the plant, in landscape irrigation and on construction projects.

Most of the water will then go through more advanced purification at a future site near Chanticleer and Soquel avenues. Using microfiltration, reverse osmosis and UV-light, the center will treat the recycled water to drinking standards.

On Dec. 10, the water district broke ground on that site. They expect construction to go through 2023.

Three wells will then inject the water into the ground in an effort to halt seawater intrusion.

The project includes eight miles of underground pipeline that stretch from the west side past Capitola. Melanie Schumacher, the special projects communications manager, thanks the public for putting up with the “short-term nuisance” of traffic delays and detours as they construct the lines.

“I think everybody can rally and appreciate the long-term benefits of water sustainability,” she says. “We want to thank the community for understanding and accepting a little bit of the short-term construction inconveniences.”

The rains provided an opportunity to divert freshwater from Harkins Slough to the San Andreas Terrace for the first time in almost two years.

Lockwood says 2020 was a record diversion year, but in 2021 the slough water was so low and briny that the agency could not divert at all. This year, the water quality is good. But without more rain, the agency will need to turn the pumps off again. He says it works “like a savings account for water.” And after a dry, sunny January, the Pajaro Valley is already tapping into those savings.

“The recovery wells are already on, working to extract the water to put into our pipeline,” says Lockwood.

The agency delivers supplemental water to growers in the area to avoid drawing more water from the critically over-drafted Pajaro Valley Basin.

They’re also increasing storage options in the area. Each year, the naturally occurring College Lake in Watsonville gets drained and farmed. Most of the drained water ends up flowing to Monterey Bay.

The College Lake Integrated Resources Management Project will increase the capacity of the lake and make the water available for agricultural irrigation. It includes the construction of a treatment plant and six miles of pipeline.

On Dec. 7, the State Water Resources Control Board approved the water right permit for the project.

“That had been pending for almost four years and was a major achievement,” says Lockwood.

In another recent win for PV Water, the board of directors made the novel Groundwater Recharge Net Metering program permanent in September.

The program helps landowners create and maintain sites where excess runoff can percolate back into the ground. Participants then receive a rebate based on how much water their site collected.

It operated as a pilot program for the past five years. It was set to end automatically unless the agency’s board of directors voted to keep it. In September, the board decided to remove the word pilot and make it an ongoing program. It currently includes three operating suites, and organizers are planning others.

Andrew Fisher, a UCSC professor and partner with the agency on the project, hopes the net metering program will work for years to come in the Pajaro Valley. He also wants to adapt it to fit other areas. Fisher is currently working with the Santa Clara Valley Water District to implement a similar program there.

Individual districts must determine what strategies work best for their communities, but Fisher notes one common theme in his work across agencies: “I see a lot of busy people trying to innovate and get as much done as they can. Arguably the most important public health advance of the 20th century is the widespread availability of healthy, clean water. And a lot has to go on for that to be possible.”