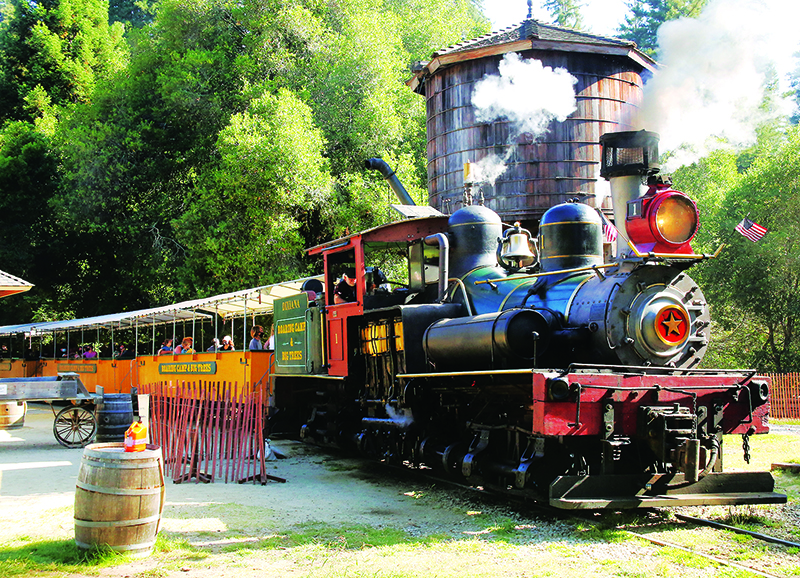 It’s just after noon on Jan. 28, and a Roaring Camp train is getting ready to leave the station to wind its way up the Santa Cruz Mountains.

“We’re two minutes late now, but that’s OK,” says the announcer on board, as the last stragglers make their way from the parking lot. “Because by Amtrak’s standards, we’re still early.”

The tourist train is sold out, a clerk in an old-timey costume at the General Store explains. The railroad’s other main train—the one that heads down the mountain to the Santa Cruz Beach Boardwalk—won’t run until April, he says.

And yet, in the past few days, that “Beach Train” has been at the center of a vicious dispute between groups with opposing views of what should happen to a stretch of land on the other side of the county.

Roaring Camp’s trains, which carry more than 250,000 passengers through the San Lorenzo River Valley every year, are known for providing locals and tourists a connection to a bygone, steam-powered past. So it might seem ironic that Roaring Camp turned to a Meta-owned platform to disseminate its side of the story in the contentious war between those who want a “trail only” from Santa Cruz to Watsonville, and rail-trail advocates who believe having a rail line and a trail is the best option.

“SAVE THE BEACH TRAIN” proclaimed an Instagram ad circulating on Jan. 24 featuring a depiction of a locomotive and fonts reminiscent of the hand-painted signage and typewriter-lettering popular in the Felton area. “The Vote is 2/3/22.”

The advertisement refers to the Santa Cruz County Regional Transportation Commission’s plan to discuss a technique introduced in the 1983 Rails-to-Trails Act called “railbanking.”

RTC officials say one way to protect their rights to the railroad section they own, known as the Santa Cruz Branch Rail Line, or Main Branch—including the portion that both groups want their competing multi-modal trail plans to use—would be to officially deem the line “abandoned” and have a federal agency “railbank” it.

This would preserve the ability to haul freight on the line in the future, if locals decided that was a priority—and a company was able to come up with the $50-plus million to fix up all the trestles, culverts and concrete overpasses. Currently, it’s in a state of disrepair.

Roaring Camp, which has a freight deal in place to subcontract for Minnesota-based Progressive Rail’s St. Paul & Pacific Railroad entity, sees the tracks as a lifeline that connects their Watsonville outpost to their home base in Felton.

They say powerful backroom operatives have been pressuring them to play ball with the RTC on a railbanking plan south of Santa Cruz—or else.

The or else, they contend, is a threat to push for the line along Highway 9 through Henry Cowell Redwoods State Park to be declared “abandoned,” a strategy which—if pursued successfully—could put their tourism and freight operations in jeopardy.

That’s because if the rail line is declared abandoned, the RTC would have more control over Roaring Camp’s tourist train access to key areas of Santa Cruz, including the Boardwalk and Depot Park, the railroad says, adding it would also expose it to the risk of property rights lawsuits.

“In a dastardly move and behind closed doors, the Regional Transportation Commission will be voting on Forced Abandonment of the Felton to Santa Cruz line on the agenda for 2/3/22,” Roaring Camp’s Save the Beach Train website claims. “The RTC’s Forced Abandonment proposal is an aggressive attack, fueled by special interests that are lobbying hard to end rail transportation in Santa Cruz County.”

RTC staff haven’t recommended commissioners take any action at this point. There is also no vote scheduled for the item at the Feb. 3 meeting.

And commissioners of the embattled transportation agency, whose voting body is made up of local city councilmembers and county supervisors, say they aren’t attempting to nix rail transportation.

But, the agency says, freight service is barely viable in the region. It’s so bad that St. Paul & Pacific informed the RTC in 2020 it might file for abandonment itself. If the railroad did pull the trigger, it could put Roaring Camp in the legal crosshairs within four months, according to Guy Preston, the RTC’s executive director.

He says neither trail-building plan can be realized until more deals are struck to allow cyclists and pedestrians to pass. Railbanking, he says, would ensure neither of the two pathway projects could be derailed by a C-suite decision up in the Twin Cities.

“You’re banking the property rights for future reactivation of heavy freight rail service,” he says, adding he understands why Roaring Camp would be against the idea for the Main Branch. “They’ve opposed it because it would leave them with a stranded segment.”

Rail-and-trail fans say theirs is the more forward-thinking approach, since it would use existing infrastructure while embracing the sorts of technology green energy proponents and transit activists preach.

Trail-only boosters, in particular Santa Cruz County Greenway, argue rail-and-trail is too costly to be realistic.

RTC Commissioner Manu Koenig, the former executive director of Greenway, says he isn’t against rail by a long shot. After all, he notes, he previously worked for Germany’s national railway Deutsche Bahn AG. But, he says he doesn’t think the rail-and-trail proposals here would go very far toward coaxing people out of their emissions-pumping vehicles.

“It needs to be cheaper, faster or more fun,” he says of effective commuter rail. “Just building a train is not a solution.”

In December, Greenway submitted a petition with 16,125 signatures to the County Clerk/Registrar of Voters Office for examination, and boasted this was the largest number ever collected for a voter initiative. It’s been trying to get a ballot measure approved to amend the county’s General Plan to prioritize the trail-only option from San Lorenzo Bridge in Santa Cruz to Lee Road in Watsonville—and pursue railbanking. Greenway says it wants to let Roaring Camp keep operating from Felton to the Boardwalk and in Watsonville. On Monday, officials said enough of the signatures were valid for the referendum to proceed.

Koenig says he was glad the Board of Supervisors, on which he also sits, was set to discuss having the question placed on June 7 primary election ballots.

“Ultimately, I’m for options that are realistic that our community can afford,” he says. “It’s long past due. I think the public needs to be able to vote on how we proceed.”

Preston says allowing concerns about freight to hamstring either trail proposal doesn’t make sense, especially when business isn’t booming. St. Paul & Pacific tried putting an intermodal transfer facility in Watsonville, but the company drummed up less than a third of the business they’d hoped to attract, he notes.

“They were just losing money,” he says. “The number of cars they were shipping each month was just going down. They said they needed to move 1,000 cars. They were moving more in the neighborhood of 300 a year.”

Of course, as the former Northern California project delivery manager for the perpetually-delayed California High-Speed Rail Authority, Preston knows a thing or two about how trying to accommodate freight can ice cool-sounding projects.

He recalled how efforts to accommodate Union Pacific led to discussions about a redesign for Diridon Station in San Jose—and an extended build timeframe.

“We were working on possibly sharing tracks,” he says. “It was causing complications in all of our design requirements.”

For example, since commuters need to board from a level platform, commuter and freight trains would need to enter the station on different tracks. Between 2008 and today, the projected cost of the high-speed line rose from $33 billion in 2008 to more than $80 billion today. The San Jose to Merced section of that project remains in the environmental-review phase.

Plus, he says the reason the RTC is on the hook for infrastructure repairs for the Main Branch in Santa Cruz County is because Roaring Camp didn’t want to shoulder that responsibility in the first place—otherwise they’d be in the conductor’s booth.

Jim Weller, a land title consultant who worked on the deal in 2014 for Union Pacific, via First American Title Insurance, when they sold the Main Branch to the RTC, says there’s reason to believe Greenway members may have ulterior motives behind their affinity for railbanking.

While it’s true that the mechanism would allow the RTC to keep the rail corridor even if the line was deemed “abandoned,” property owners who hold easement papers would almost certainly be in line for a serious payout from the feds.

“They pay out hundreds of millions of dollars every time there’s an abandonment and railbanking,” he says, asserting the alternative dispute resolution mechanism would be a boon for some trail-only boosters. “I think that’s their main motivation—is the money.”

And Weller says he’s personally spoken to two RTC commissioners who confirmed the idea of pressuring Roaring Camp not to oppose railbanking on the Main Branch, by proposing forced abandonment on the line the Beach Train uses, was considered by the RTC in closed session.

In December, Weller gave $500 towards the campaign to kill Greenway’s ballot initiative.

The minutes for the Jan. 13 RTC meeting indicate the idea of “adverse abandonment action involving the Felton line” was brought up by a commissioner, with the agency’s legal counsel confirming the matter could be discussed.

Koenig says the RTC isn’t trying to coerce anyone.

“No one is trying to close down Roaring Camp’s business,” he said. “The decisions we’re discussing would really not impact their Beach Train today.”

He says landowners could win lawsuits whether or not railbanking is pursued, the only difference is who would pick up the tab—the federal or the local government.

Koenig describes “significant” areas around the Santa Cruz Harbor and Aptos Village where property rights could be challenged.

“Those lawsuits can happen whether or not abandonment or railbanking can happen,” he said. “Abandonment does not require removal of the tracks.”

Melani Clark, Roaring Camp’s CEO, insists the family-run, women-owned business would come under threat if the RTC goes ahead with the idea.

“Local promoters of railbanking have been very clear for several years now that they are against rail, including both passenger and freight,” she says. “They use railbanking to create the impression that our community will get both rail and trail.”

Clark says the RTC held meetings with Roaring Camp about future access to the Boardwalk platform, but only offered to move forward if the railroad agreed not to stand in the way of railbanking.

“Roaring Camp has rejected that option because it would result in a loss of federal protection and would introduce the potential for eminent domain claims in the future,” she says. “The City of Santa Cruz has been very successful in finding funding to complete sections of the rail trail, two of which have already been completed, with another set to begin very soon.”

In recent days, supporters of Roaring Camp and its Beach Train have taken to social media to voice their dismay at any move against the tourism and freight operator. On Jan. 26, authorities at five San Lorenzo Valley fire districts urged the RTC not to move ahead with railbanking, and expressed interest in exploring experimental firefighting-by-rail technology, which was used to battle last year’s Dixie Fire.

RTC’s Preston can talk for hours about the intricacies of rail and recreation development along California’s coastline. He says he just wants the community to make up its mind about what it wants, so he can focus on implementing the winning vision.

“I am really pro-rail,” he said. “Right now the RTC is set up for failure. I’m trying to find a way to put us in a better position.”

Next ArticleBreakthrough by UC Researchers Could Boost Our Body Clocks