.Why Isn’t There a Train to San Jose? 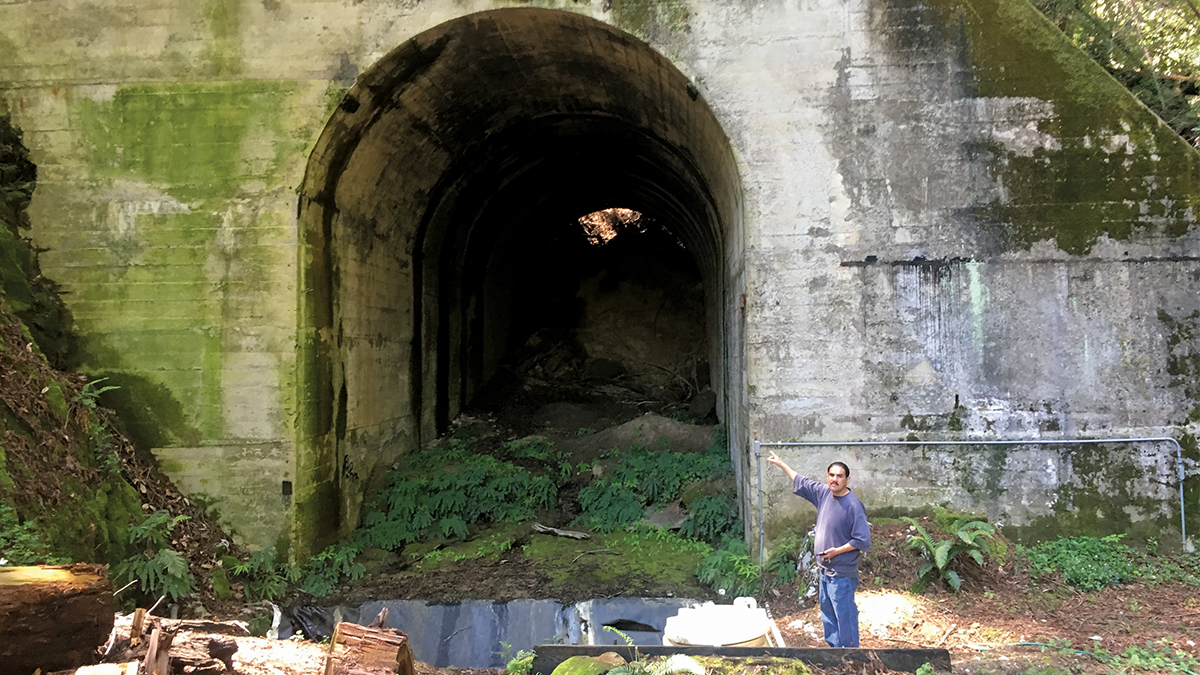 “There has got to be another way.” That’s what I muttered to myself at 5:15 each weekday morning for four long years, as I sleepwalked my way onto the Highway 17 Express for a very un-express-like two-hour bus ride to my high school, Bellarmine College Preparatory. Let’s just say my daily sojourns over California’s famously dangerous highway weren’t the highlight of my teenage years. Sometimes I’d arrive to school hours late, and sometimes not at all. There were no other options for a 15-year-old commuter.

Never having been a fan of Highway 17, traffic jams, or buses in general, I accepted GT’s challenge to investigate the restoration of an old train route linking Santa Cruz County to Silicon Valley. The idea of passenger service along this route, is one of the area’s great transportation “what ifs” of the last decade, and depending on who you ask, those old tracks may even represent a “what someday could be.”

Deep in the wilderness along the Southern Pacific Railroad Company route, the Glenwood Tunnel sits quietly near the summit of the Santa Cruz Mountains. At 5,793 feet, it’s one of two mile-long tunnels along the historic route. Inside, near the entrance, huge chunks of debris have fallen from the ceiling, blocking the path deep into the belly of the cavernous chamber. Most of the Glenwood Tunnel has collapsed, as it was dynamited for insurance reasons.

The topic of a hypothetical rail line over the hill comes up from time to time in transportation discussions, especially given that the Santa Cruz Regional Transportation Commission has been considering the addition of passenger service along the coastal rail corridor. County leaders decided more than 20 years ago, however, not to pursue the idea, given that the cost could end up being $1 billion. And although the concept isn’t currently being studied, there’s little doubt that the idea of a train stopping in San Jose—one of the world’s top-tier population centers—could have been a game changer. Even Manu Koenig, who works on the anti-rail campaign via the nonprofit Greenway, says he would “probably be for building” a train system if the route ended in San Jose.

However, some Santa Cruz politicians and other locals have long shown a leeriness toward linking themselves too closely with their counterparts over the hill, as the prospect of a direct rail line from Santa Cruz County to Silicon Valley makes many people uncomfortable.

Former Santa Cruz County Supervisor Gary Patton recently told me via an email that “once a rail connection existed, Santa Cruz would cease to be as nice as it is now, since it would be flooded with people demanding that our nice residential neighborhoods be turned into high-rise, high-density dorm rooms for Silicon Valley workers, with more traffic congestion, and air pollution. Housing prices would be raised even higher.”

Local historian Derek Whaley supports the reestablishment of the once-popular and historically important railway between the counties of Santa Cruz and Santa Clara. In his book Santa Cruz Trains: Railroads of the Santa Cruz Mountains, Whaley traces the history of trains in Santa Cruz County, starting with the first blast of steam whistle in the 1800s. The 34-year-old Whaley tells me that restoring the train route from Santa Cruz to Silicon Valley would have tangible benefits. “To start with, it would provide much-needed relief to many of the commuters who travel Highway 17 each day,” he says. “Getting from Santa Cruz to Diridon Station would be much faster during commuting times.”

Santa Cruz Trains is an in-depth investigation into every tunnel, trestle, twist, and turn of the 26.5 miles of track between Santa Cruz and Los Gatos. “The route, abandoned in 1940, is almost entirely intact in one form or another, and most of it is not is use,” explains Whaley. “The fact that the route hasn’t been used for anything significant in 78 years makes me want to believe it will be restored some day.”

Growing up in the Santa Cruz Mountains, Whaley admits that he didn’t give the tunnels and abandoned train tracks around his home a second thought. Sure, they were cool and slightly creepy places to hike and explore, but their rich history was completely lost on him. Now they’re his obsession. He’s spent much of his adult life poring over the dozens of proposals, pitches, feasibility studies, and other attempts to restore railroad service over the Santa Cruz Mountains between Santa Cruz and Santa Clara Valley via the abandoned Southern Pacific Railroad Company corridor.

He says most of the earlier studies showed that restoring railroad service between the two areas would be feasible—energy-efficient, environmentally conscious and cost-effective.

The Lockheed Pilot Study in the late 1970s, estimated that 27 percent of the track between Santa Cruz and Silicon Valley could be easily repaired, 37 percent of the route was still intact, 26 percent required new construction, and 10 percent involved tunnels which were generally intact, Whaley says.

Lockheed’s report concluded that restoring the railroad had clear advantages over highway expansion, something the RTC was considering at the time. It promised greater energy efficiency, lower greenhouse gas emissions, lower accident rates and a lower cost. Rebuilding the abandoned route from Santa Cruz to Los Gatos would cost hundreds of millions of dollars less.

Setting the stage for years of future battles, the Santa Cruz County Board of Supervisors dismissed the Lockheed report outright, according to a blog post written by Whaley. The board took the position that an over-the-hill route “would not be consistent with the planning objectives of Santa Cruz County.”

A 1994 feasibility study was the last real attempt to revive rail service over the Santa Cruz Mountains. It came after Fred Keeley of the Santa Cruz Board of Supervisors met with Santa Clara Valley Supervisor Ron Diridon in 1991, and expressed a shared interest in restoring the railway that once connected the two counties.

But their enthusiasm was met with resistance from other supervisors. “Do we really want to invest $100 million in order to increase our ties to Santa Clara Valley?” Patton asked in an email at the time, according to correspondence that Whaley shared with me.

Keeley fired back that Santa Cruz already was a bedroom community to Silicon Valley and that it was “right, proper, and intelligent to try to provide better and safer transportation for the people who are already here.”

The study concluded that approximately 4,400 riders could be expected to take the light rail train each weekday, including 3,400 commuters traveling each direction. It was estimated that at least 15 percent of vehicular commuters would eventually hop aboard the train for their daily commutes. This, the study found, would significantly lower traffic congestion and accidents on Highway 17.

Dollar estimates studied were a bit higher than anyone had guessed, and ranged from $612.4 million to $1.07 billion, which was still less than the estimated cost of widening Highway 17.

The study concluded that the environmental impact of a train route from Santa Cruz to Santa Clara County would be minimal, but that local communities in the Laurel and Glenwood areas could be negatively impacted by noise levels and changes to the environment. It would cost around $10.6-15.8 million a year to maintain the line, depending on the route.

Santa Clara and Santa Cruz county officials dismissed the study’s recommendations in February of 1995. Instead, they opted to improve bus service along California State Route 17 and add truck-climbing lanes along the road. The truck climbing lanes, which would have cost upward of $4.8 million per mile, never materialized.

Luis Mendez, deputy director for the RTC, tells GT via email that, if leaders seriously considered pursuing a rail line over the hill today, that “any cost numbers shown in the study would need to be increased significantly.”

Lost in the Hills

I’ve got to admit I’ve become a bit obsessed myself with the ghost of the fabled Standard Pacific route, as I had fun taking pictures and imagining a steaming locomotive chugging through the stone walls almost a century ago.

Will the Glenwood Tunnel, also known as Tunnel 3, ever feel the roar of an engine again? Maybe not. Rebuilding the route would require a web of government agencies, businesses, and landowners on both sides of the hill to work together toward a controversial goal. That being said, Whaley is optimistic about future possibilities. When it comes to relieving congestion on Highway 17, there are few options available. He believes that if the cost were shared with voters of Santa Clara County, the price tag could be manageable.

“For me, it would really be a sign that California is really taking alternative transportation seriously,” he says, “and is considering all of its options.”