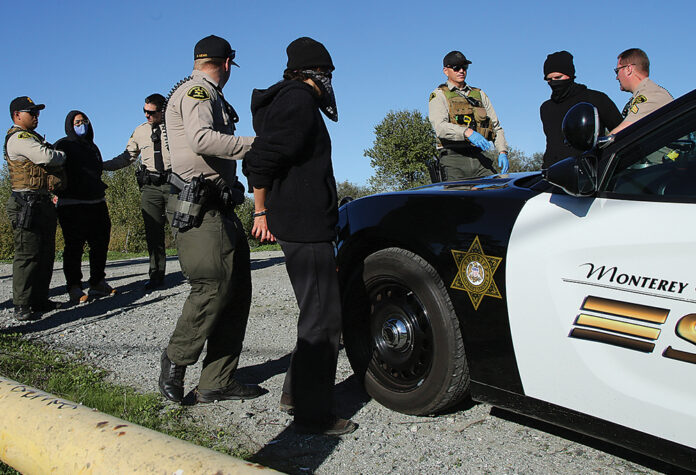 [This story has been updated from an earlier version. — Editor]

PAJARO—A federal judge has granted a temporary restraining order filed by an attorney representing dozens of people living in the Pajaro River levee against a planned cleanup organized by Monterey County officials.

Anthony Prince, general counsel for the California Homeless Union/Statewide Organizing Council, on Wednesday morning filed the injunction in the U.S. District Court for the Northern District of California.

The motion claims the planned cleanup of the levee at the border of Monterey and Santa Cruz counties poses a “heightened risk of great bodily harm to hundreds of unhoused men and women,” and that officials have not provided alternative shelter to the people who they are asking to leave the riverbed.

Prince, who represented the people living in Santa Cruz’s San Lorenzo Park in a federal lawsuit against the city of Santa Cruz that was dissolved earlier this year, in an email on Wednesday said the case has been assigned to Magistrate Judge Susan van Keulen.

He said Thursday morning that a hearing was scheduled for Monday, and that all work at the levee must halt until then.

Monterey County Sheriff’s Chief Deputy John Thornburg said that all work stopped Thursday after they were told the temporary restraining order was granted.

Monike Tone, a plaintiff in the injunction and the president of the Pajaro/Watsonville Homeless Union, said that the people staying at the levee received notice on Nov. 10 that they had to vacate the area before 8am Wednesday, when the cleanup of the levee organized by the Monterey County Water Resources Agency would begin.

Tone patrolled the area on a bike on Wednesday morning as about eight Monterey County Sheriff’s patrol cars accompanied a handful of vehicles from a landscaping company contracted for the three-day job.

There were about a half-dozen people that were protesting the cleanups at various locations along the levee.

Four people were arrested Wednesday, including three who were dressed in black from head to toe. They were taken into custody for obstructing and delaying a peace officer after they stood in the way of patrol cars trying to access the levee. They were transported to Monterey County Jail where they would likely be booked and released, Thornburg said.

They were not among the people who were staying in the levee, Thornburg said.

As workers moved through the levee removing the encampments on the riverbed, people from Cal State Monterey Bay’s Center for Community Health Engagement (CSUMB CHE) raced from camp to camp to provide the people in the levee with storage containers for their belongings.

They also offered them a voucher for a stay at a Monterey County hotel to help them transition into a possible permanent housing option, says Josh Stratton, a representative from Monterey County 2nd District Supervisor John Phillips’ office.

Stratton, who was helping hand out the storage containers Wednesday, said that CSUMB CHE employees had conducted outreach to the people in the levee leading up to the cleanup.

“We didn’t want to show up today and say ‘you have to leave,’” Stratton said. “People have been given notice. Whether they feel like they’ve been given adequate notice is a subjective opinion, but we have given notice [and] we provided assistance.”

But Tone said that the assistance provided by the county would ultimately not help people staying in the levee find long-term housing. The hotel vouchers the county gives out, she says, only house people for about two weeks, and many of the service providers included in an informational packet handed to people in the levee are at capacity.

Because of this, Tone argued, the county cannot evict the people staying in the levee under Martin vs. Boise, a case in which the U.S. Ninth District Court of Appeals ruled in 2018 that outdoor camping in public spaces cannot be criminalized unless the individuals are given an alternative shelter option.

But Thornburg on Wednesday said the county was in compliance with that court case thanks to agreements with at least two hotels that provide shelter for people experiencing homelessness.

“It might not be a house down on Main Street but it’s a place to go. [We also provide] all the assistance and put people in contact with all the people that can help those that want [help],” Thornburg said. “That’s probably one of the keys, is they have to want the help as well. We are doing the best we can. Unfortunately, sometimes when we come down here it looks like we’re the bad guy here.”

Stratton says that the cleanups are essential to maintaining the levee to prevent possible flooding—a chronic issue that has for decades plagued Pajaro and Watsonville and devastated those communities. He also said that, on top of polluting the waterway and creating wildfire hazards, people staying there have dug “significant” holes into the levee that could ultimately compromise it.

“The last thing we want to do is have [the levee] fail,” Stratton said. “We have to do this. This is a life and safety public health issue … hopefully, people will realize that this isn’t the proper place to set up camp and to dig holes.”