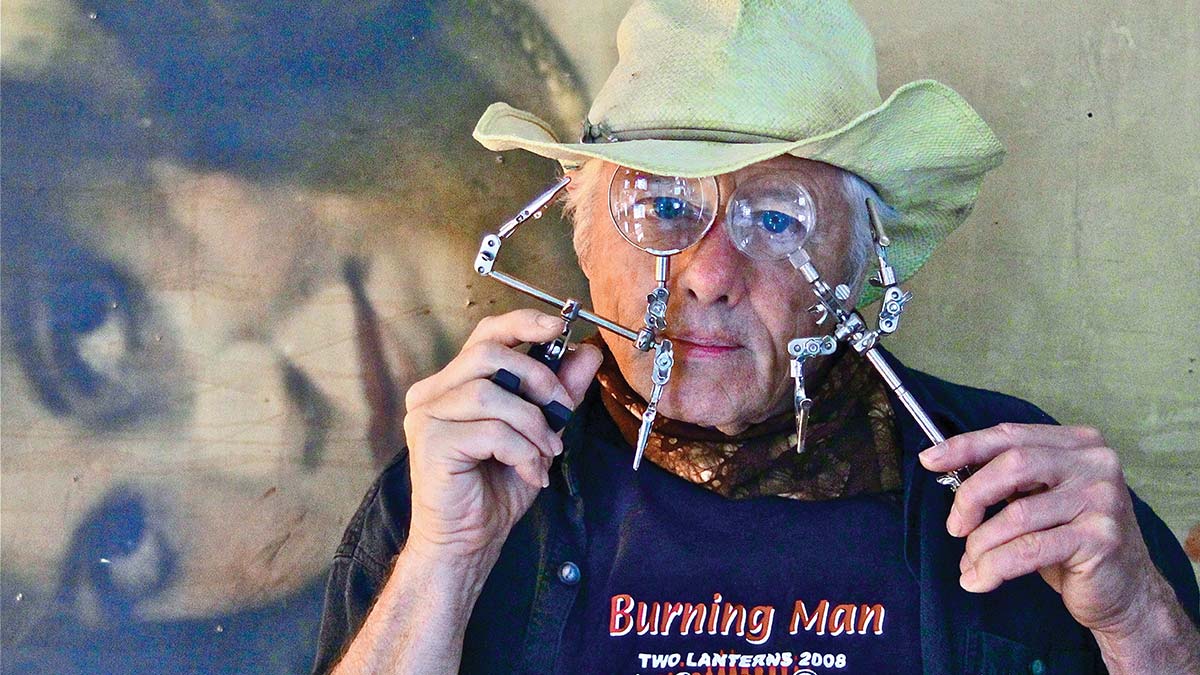 Burning Man was made for Keith Muscutt, so perfectly in synch are the missions of the annual desert potlatch and the arts-and-tech conceptualist.
Growing up with one foot in academia and the other on the Gonzo trail, Muscutt is arguably a latter-day Indiana Jones. For the past two decades he has led expeditions into the Andes, exploring and discovering lost pre-Columbian ruins, he pioneered pop-up performance events in the ’70s, and for the past nine years has been an active participant in Burning Man installations.
For the 2016 installment of Burning Man, Muscutt and his 2-Lanterns Camp collaborators have come up with something both environmentally and artistically provocative. Riffing on Ant Farm’s celebrated Cadillac Ranch installation of 10 gorgeous gas-guzzlers half-buried on Route 66 (Ant Farm founder Chip Lord was a colleague of Muscutt’s at UCSC), Muscutt has planned nothing less than an homage involving virtual electric cars rising up out of the searing desert floor.
“I’ve always had this idea kicking around,” admits the tanned, silver-haired conceptual artist, “of the globe with a car inserted on one side and exiting on the other.”

“We were sitting around talking and I mentioned this whimsical idea of mine. They loved car culture, and had been involved in automotive design.” — Keith Muscutt

That idée fixe led to the current project, a whimsical response to Cadillac Ranch. “People have done various riffs on that installation, and I thought, ‘well, this is the place to do it,’” says Muscutt. Given that the idea of finding 10 Cadillacs of that vintage was “a bit of a stretch,” he grins, “we had to come up with something else.”
Electric Renaissance is the name of the project, which when launched will not only form a visual homage to the iconic automotive burial, but will also allow Burning Man participants to sit inside fabricated Tesla-inspired electric vehicles, offering interactivity as well as a witty echo of the now-historic automotive installation.
A U.K. native, Muscutt came to Santa Cruz after his Master of Fine Arts work in dramatic arts at UC Davis. When his exchange-program visa ran out, he traveled in Latin America, worked in England and Canada, and came out to UCSC to help set up their fledgling film and electronic music facilities in the late ’70s. He also managed to concoct proto-hippie art happenings and inflatables, complete with sound and light show design, in his psychedelically saturated spare time. Between electronic art design and archaeological treks, Muscutt held down a day job as UCSC Assistant Dean of the Arts until his retirement in 2007. That year marked his first journey to Burning Man.
Two years ago Muscutt’s Burning Man team, largely tech directors from UCSC, met up with a group of architects and engineers from Aachen, Germany. “They knew all about Chip and Cadillac Ranch,” Muscutt says of his new German colleagues. “We were sitting around talking and I mentioned this whimsical idea of mine. They loved car culture, and had been involved in automotive design.” His eyes light up. “At first they suggested burying 10 Priuses.” Then it just morphed into using the Tesla trope.
Admitting that “it doesn’t make sense to do a half-million-dollar project for just one week,” Muscutt and Co. are planning a long term version of the Electric Renaissance as a permanent installation. “The time to do it is 2024, the 50th anniversary of Cadillac Ranch. Imagine 10 virtual Teslas on I-80, the route from Silicon Valley to New York.”
And in the “be careful what you wish for” category, last October Muscutt submitted a letter of intent to the Burning Man Arts group, which promotes, funds and manages art projects at the celebrated desert gathering.
“We got a grant from them in February—Burning Man Arts has been fabulous,” he contends. “It’s the most artist-friendly group I’ve ever seen.” But now the rest of the funds have to be raised—for materials, to fabricate, transport, and site-install the homage to Cadillac Ranch. “Come hell or high water we’re going to make it happen.”
The actual fabrication will take place in the Santa Cruz Makerspace in the old Wrigley building. Idea Fab Labs, part of the maker movement, will be fabricating the assembled prototypes—all cut by computer. “And then we’ll burn it!” he adds, with relish.
This year marks Muscutt’s ninth year of participation in Burning Man, which he describes as “the best of the Summer of Love, all over again—with intellectual integrity.”
Once this project is completed, Muscutt’s lifelong restlessness will doubtless re-emerge.
“Whatever happens, next summer I will for sure be back in Peru,” he says with the serious playfulness that seems to inflect every project he touches. “I’ve always said I wanted to do everything—once.”
_______________________________
Find Electric Renaissance on Facebook, and their crowd-funding campaign on indiegogo.com.

Previous ArticleSplash Opens on the Wharf