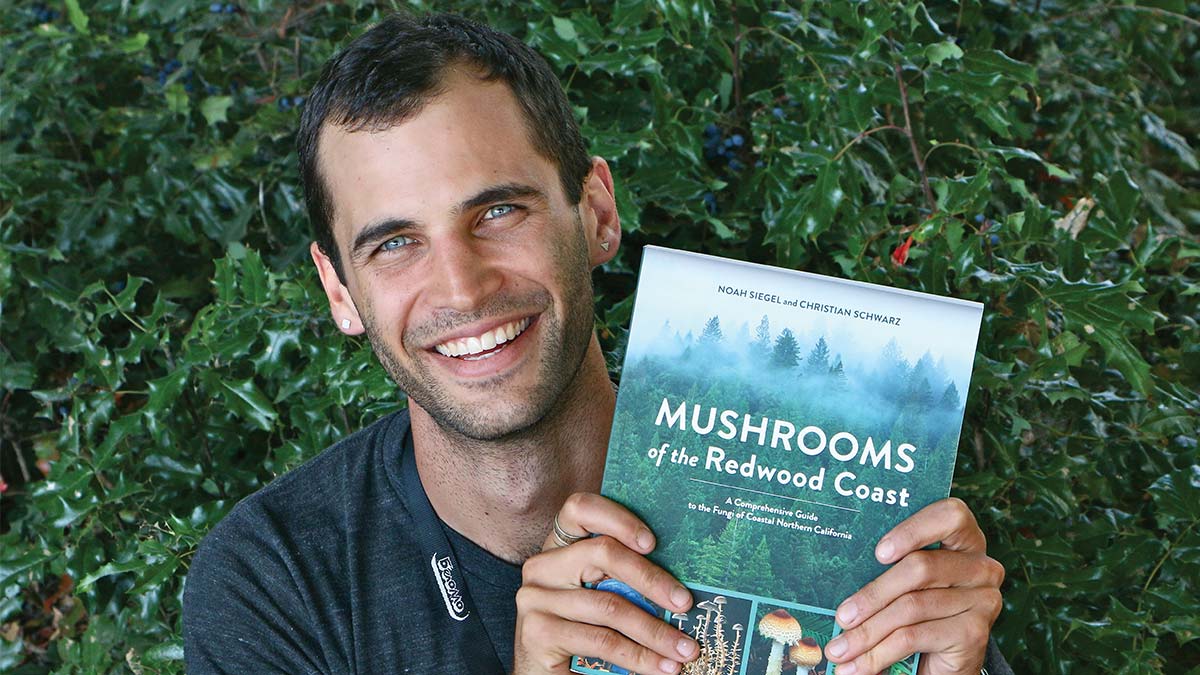 By the late ’80s there wasn’t a bookshelf in Santa Cruz that lacked its copy of David Arora’s Mushrooms Demystified. It was required reading for every hiker, backpacker, and nature-lover in California. How, then, could anyone dare publish another mushroom field guide in the domain of the legendary David Arora? Well, one has—and with the express endorsement of the original mycology guru himself. The ones who dared are Santa Cruzan Christian Schwarz and his fellow field researcher Noah Siegel. The substantial (600-plus pages) new field guide—Mushrooms of the Redwood Coast—will be on the shelves by the time you read this. Comprehensive, user-friendly and bulging with gorgeous, detailed photographs, creating the book gave Schwarz and Siegel an excuse to enjoy an extended trek through some of the most lavishly endowed landscapes on the planet.
“We think of it as a Mushrooms Demystified for the modern era,” Schwarz says. “We narrowed the focus down to the redwood coast—from Monterey County to the Pacific Northwest—and it’s full of updated taxonomy, habitat descriptions, and full-color images.”
Currently collecting fungi specimens for the Norris Center while finishing up at UCSC, Schwarz grew up in San Diego. “I got into mushrooms completely by accident. I didn’t like mushrooms culinarily. They were my least favorite food,” he adds with a micro-sneer. But his younger brother, who was reading Lord of the Rings, got a hold of a field guide of mushrooms. “We went out for a walk after a rain and when we found mushrooms,” his eyes pop, “I knew that was it for me!” What he loved about the moisture-loving fungi was “Everything! From the visual grotesqueness of them all the way to their beauty and incredible diversity,” he says.
The quest for new mushrooms still gets him out of bed in the morning. “I’m always looking around for mushrooms,” Schwarz admits. “Mushrooms give me a great sense of place, of the seasons and time.”
His other passion is tidepools, which offer the same wildly diverse and grotesque beauty, he says. The tidepools of Scott Creek Beach are his favorite.
Coming to UCSC for, you guessed it, the mushrooms, Schwarz initially stayed busy during the non-rainy season by birding. “And then I got into plants, and then I started paying attention to everything.” As a mushroom taxonomist, Schwarz especially covets unique habitats, “places where mushrooms are rare and unexpected, for example places with sandy soils,” he says. He finds known—and hopefully unknown varieties—and documents them photographically, often collecting them for the Norris Center herbarium at UCSC.
The book took the co-authors six years to create. “I met Noah at a mushroom foray in 2009,” he says, and after a year of getting together over mushrooms they decided to do a book. “We tried to be as comprehensive as possible, but there are thousands of mushrooms in this region so we had to narrow it down,” he says, laughing.
Published by Ten Speed Press, the new book profiles 767 species, each with a color photograph and detailed descriptions. “Often people don’t know where to look for mushrooms, and that’s why we’ve included an entire chapter on trees. We tried to emphasize habitat,” he says. Schwarz admits that the field trips were the high spot of making the book happen. “The adventures of being on a road trip, meeting people, that was really fun. So now we’re working on the mushrooms of the Sierra Nevada,” he says, grinning at the prospect.
Schwarz, who says he now actually enjoys eating mushrooms, vows to stay in the area as long as he can. But if economic reality forces him to leave the West Coast, he’s quite sure that “there are still some places with a good intersection of mushrooms and affordability.”

Previous ArticleTabitha Stroup: A Smash-Hit in the Pop-up Scene