.Tabitha Stroup: A Smash-Hit in the Pop-up Scene 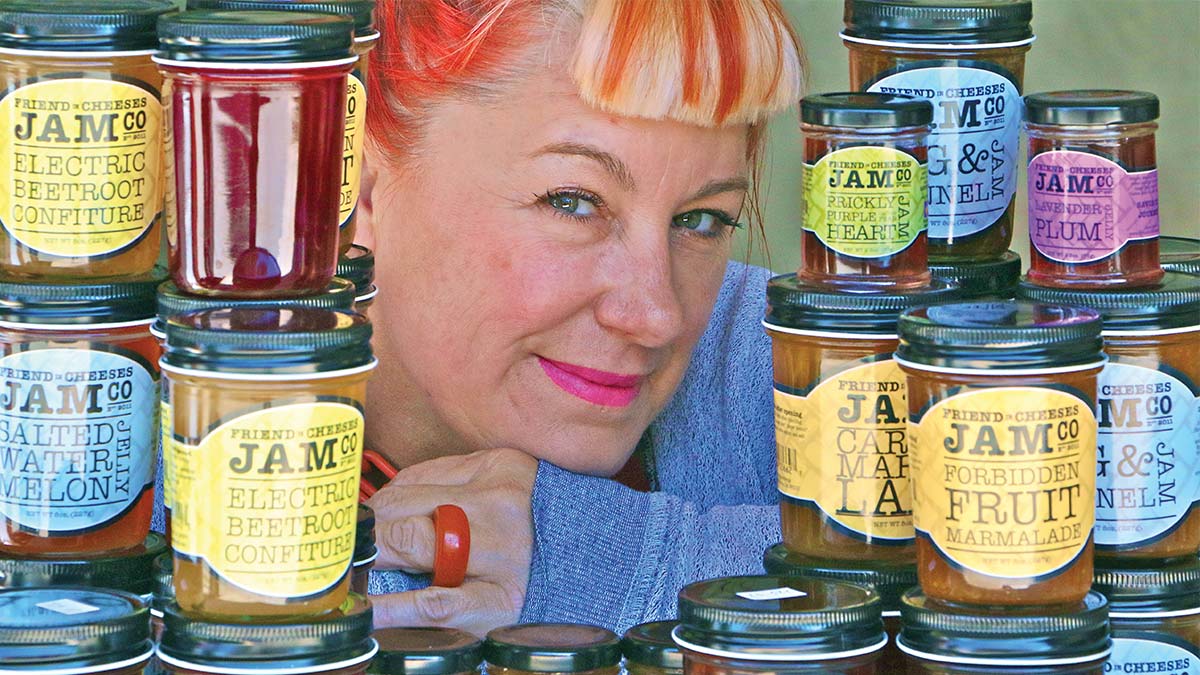 She who never sleeps, the wild woman of artisanal, handcrafted and good-for-the-planet jams, chutneys and sauces—Tabitha Stroup—takes the next step in pop-up cuisine by offering pop tarts at her next pop-up next to Assembly.
Yes, she absolutely planned that marvelous bit of rhyming wordplay—pop tarts at the pop-up. So pop over on First Friday, Aug. 5, for Stroup’s amazing vintage stylings. To pair with glasses of bubbly or beer, you can look forward to forbidden fruit marmalade and bacon tart with bourbon glaze. How post-millennial, no? Consider strawberry tarragon and chevre tarts. Pinot cherry tarts with black pepper glaze. Pork pâté tarts and prickly purple-heart jam. The pop queen will add a few more surprises for inquiring first Fridayers, but I’m thinking this sort of popular event will be populated early by those bored with popcorn and other predictable items. Things start popping at 5 p.m. and will continue until every last pop tart is gone. Details on Stroup’s Facebook page and at friendincheesesjamco.com.

The quest for ever-more palatable gluten-free products has us combing the waterfront (that’s a metaphor) for items we can live with. A shout-out to Felix Kulpa gallery director Robbie Schoen who, having read of my quest for all things senza di gluten, surprised me with a gift loaf of gluten-free, 100-percent whole-grain bread from Canyon Bakehouse. It’s available in Staff of Life’s refrigerator section, and sure enough this seven-grain version acts very much like gluteny bread when toasted and liberally attacked by butter and jam. The slices are small, perishable (two days and challenges begin), but better than merely acceptable. Brown rice flour, tapioca flour and whole grain sorghum flour provide the texture (OK, some texture). We actually enjoyed it. The best gluten-free bread so far.

I can absolutely swear that I’ve never written these words before: “whatever you do, don’t miss the maple-glazed doughnut!” But I mean it. Bantam’s artisanal culinary style has never been better showcased than with the final, barely legal bite we shared at last Saturday’s brunch. Nothing is ordinary at this attractive glass-lined restaurant. My companion’s decaf coffee was custom-made in a Chemex glass unit, while I sipped my industrial-strength Verve java served with little brown sugar cubes. Only work responsibilities in the afternoon prevented us from joining fellow brunchers for a flute of Sommariva Prosecco. Another time, sigh.
We began with a pretty plate of heirloom tomatoes and crunchy, moist, fried house bread on a bed of soft, sensuous burrata with bits of Armenian cucumber and basil ($11). Easily my favorite dish of the morning, this update of panzanella hit all the right spots—indulgent, exploding with flavor and perfect as a complete breakfast. But the glazed doughnut—actually it could be properly described as a frosted yeast doughnut—arrived with its hole (also glazed) on the side. Each bite was rich and light yet substantial. An artisanal update of the people’s pastry and worth every bit of its, ahem, $7, pricetag. Gluten worth consuming. Bantam, brunch, 10:30 a.m. on Saturdays. Cheeseburgers start at noon.

Previous ArticleOlallieberries are a Taste of Summer in Santa Cruz