.How Public Art Revived the Ruins of Post-Quake Santa Cruz 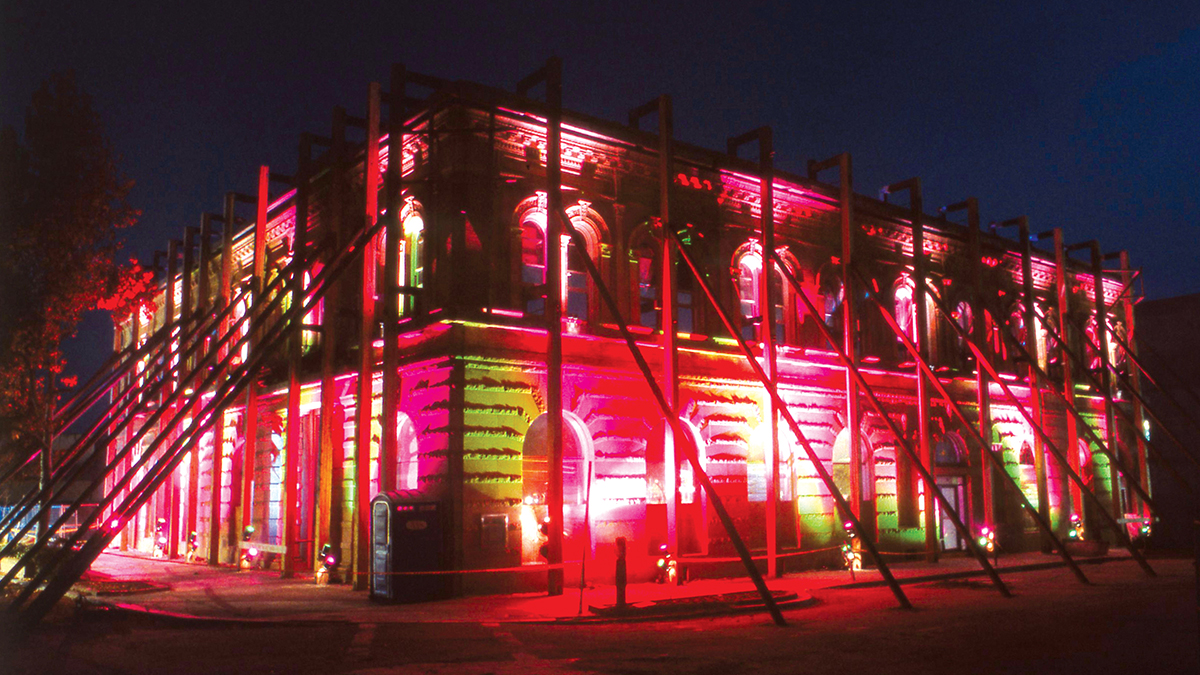 After the Loma Prieta earthquake, a group of artists came together under the name “On Sight” to rebuild a sense of hope in the wreckage of downtown Santa Cruz.

Art & Healing: 30 Years After The Loma Prieta Earthquake, a new exhibit at the Museum of Art and History (MAH), tells the story of a community finding closure and new beginnings in the wake of a tragedy.

On Sight founder Robin Kandel became fascinated by the aftermath of the disaster. In the excavated lots and empty storefronts of Pacific Avenue, she saw blank canvases where artists could create temporary works to inspire the rebuilding.

“Some people’s aesthetic gravitates to ruins and rubble,” Kandel says. “It was just that thing that’s revealed, you know, the hidden underpinnings of the town.”

Kandel started “messing around down there in the rubble,” and had soon constructed what she describes as five “20-foot-tall stick men sculptures, to get the ball rolling.”

She recalls a woman telling her that since her apartment building had been condemned after the quake, it was too depressing to walk past her old home, but the new sculptures brought a smile to her face.

“She was appreciative that something was happening, that it showed that we weren’t just going to be in the pits forever,” Kandel says.

“I saw it all,” she says. “We were really in a funk for a while, and it was seriously dark and dusty. And then I remember these little sprouts of creativity coming up. These little artistic gifts started popping up everywhere, and it made us feel like, OK, things can get better.”

OUT OF THE RUBBLE

Kandel held the first meeting of what would become On Sight at her house on Nov. 1, 1989, just two weeks after the earthquake that destroyed 29 buildings in downtown alone.

As lots were cleared, businesses began moving their inventories into seven enormous, temporary tent-like structures called Phoenix Pavilions, including a volunteer book brigade that helped to reopen what Kandel affectionately referred to as “Booktent Santa Cruz.”

“It was like walking through a bazaar,” she says.

Artists Renee Flower and Gene Holtan got started with On Sight’s first project: free wrapping paper for the holidays. They made two designs, and the Santa Cruz Sentinel offered to print them for free, producing 10,000 copies in the first week of December and distributing them to downtown businesses.

Mike Mandel, an art teacher at Cabrillo College and UCSC, also got his students involved in the push for public art. They installed cardboard figures and faux movie posters in the entrance of the Del Mar Theater, and later decorated plywood construction fencing with photographs. Mandel also spread the word to a network of artists around the bay area, encouraging them to come to Santa Cruz to create something for the community.

On Sight became a tax-exempt corporation under the William James Association, and in 1990 the board submitted proposals to fund 18 art projects with some $68,000. Nine projects were funded through 1992. A photograph in the new MAH exhibit shows board members meeting for lunch in the remains of a downtown building.

One of the most iconic pieces produced was The Lighthouse, a 30-foot-tall wooden lighthouse built by Robert Catalusci, complete with a rotating spotlight and a carousel of portraits taken by UCSC students projected from within. Catalusci was quoted in the Sentinel in 1991, calling the sculpture “a beacon of light, signifying a safe harbor to come back to.”

Lighting artist John Ammirati was inspired by the ruins of the Pacific Western Bank at Front and Cooper streets, where only two walls of the building remained, heavily buttressed with supports. For his piece Phantom Bank, Ammirati projected lights onto the broken facades and interiors that slowly shifted and changed colors.

In addition to welcoming the community back to Pacific Avenue, the works these artists made after the Loma Prieta earthquake helped establish today’s vibrant arts scene in downtown Santa Cruz. Mandel and others advocated for spaces for art at the Vision Santa Cruz meetings where 36 city officials, bankers, merchants and community members decided the direction of the recovery and rebuilding of the downtown area.

On Sight board member Lin Marelick says in a quote featured in the exhibit that the group “paved the way for what is now an ongoing downtown site for installation pieces, and On Sight courageously made that move when the downtown was most devastated.”

For Antonia Franco, interim executive director of the MAH, the outgrowth of art from trauma also symbolized broader resilience.

“This exhibit shows how we can turn challenges into uplifting, shared experiences,” Franco tells GT in an email. The post-disaster art wave doubled as a lesson, she adds, that, “We can use creativity to grow stronger and more connected as a community.”

Kandel says it was also personally invigorating to get a group of creative people together who may have otherwise never met.

“It became about owning your town,” she says, “owning some piece of hope,”

‘Art & Healing’ opened Friday, Oct. 4 at the MAH as part of a city-wide look back at the Loma Prieta earthquake after 30 years. It will run until Aug. 22, 2021, and then be incorporated into the history gallery. santacruzmah.org/lomaprieta.