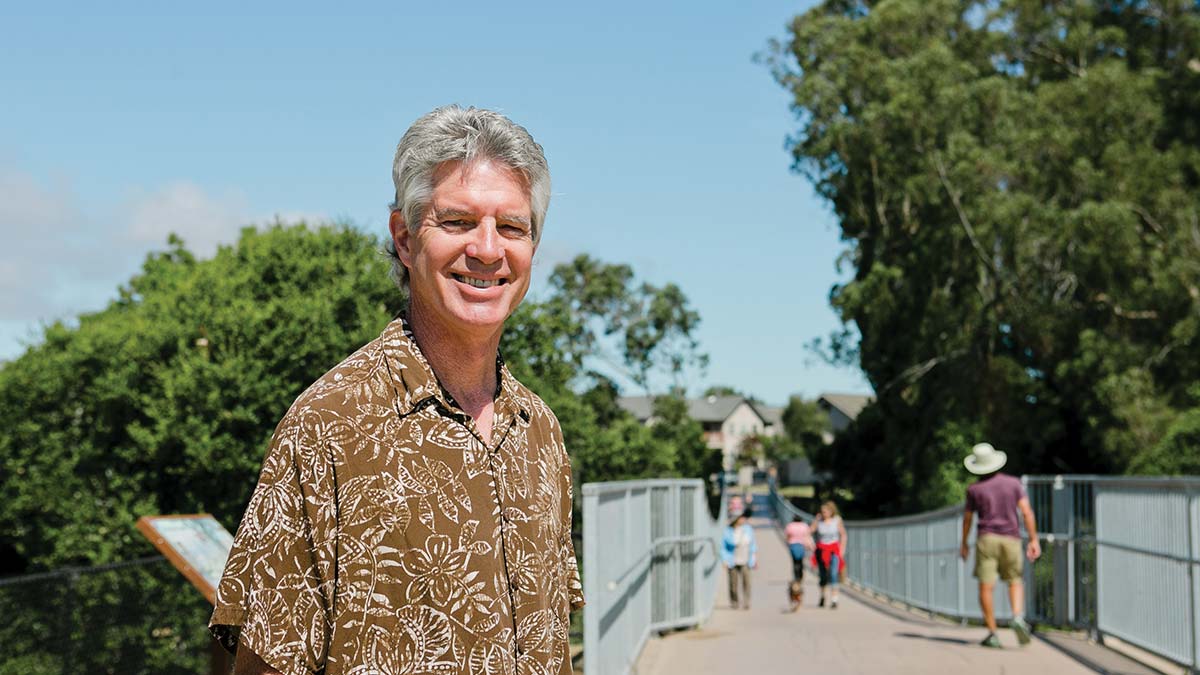 Mark Mesiti-Miller’s passion for transportation planning in Santa Cruz is perhaps best told by his wife, Donna Murphy.
On a recent Napa getaway, Mesiti-Miller took her on a detour, away from the vineyard tours, to the wine country’s lesser-known draw: its developing rail system and accompanying rail trail.
“It had nothing to do with our trip, but our curiosity,” says Murphy, UC Santa Cruz vice chancellor before she retired in 2013, describing their exploration of how the Napa trail is laid out, and how the stations and railroads interact.
A retired civil engineer, Mesiti-Miller is consumed by his curiosity for housing and transportation. Since selling his firm last year, Mesiti-Miller, a Santa Cruz planning commissioner, has closely studied the developing Santa Cruz Corridor plan, which will aim to increase density on major thoroughfares. He’s spoken during public comment in meetings on a range of topics, like the possible November ballot measure for transportation, and has hosted events to discuss passenger rail in Santa Cruz along the coast.
“His mind’s always kind of gnawing on different issues,” says Murphy. “He reads a lot, and so he tracks these things. If he’s read something about a complete street, then as we’re driving down, he’ll study it. If he’s looking at housing density and we’re driving around town, we’re looking at the scale of buildings, how the roads work, et cetera.”
The planning commission published its General Plan 2030 four years ago, and along with it a corresponding land-use map. Mesiti-Miller’s vision for Santa Cruz, also laid out in the plan, centers around its corridors. These are the city’s commercial hubs where most of the mom and pop shops, drugstores, bakeries and markets are, along Soquel Avenue, Water, Ocean and Mission streets.
Mesiti-Miller calls for mixed-use development along these thoroughfares, with ground-floor commercial space, and above that, affordable housing.
“The most sustainable way to grow a community is vertically and along its corridors,” says Mesiti-Miller. “It’s called transit-oriented development, or T.O.D., and it tells us what we need are housing units along our corridors.”
As they are now, the corridors aren’t comfortable for pedestrian traffic, says Mesiti-Miller: Soquel Avenue carries around 30,000 cars each day, according to a 2014 report.
“Who wants to walk along Soquel between Morrissey and Capitola Road? Nobody,” says Mesiti-Miller. “There’s no place to park, no place to ride your bike. It’s dangerous. A guy was killed there on his bike a year or two ago.”
Santa Cruz’s busiest streets need wider sidewalks, space for bicycles and places to park them, and trees, he says.
“We need to create neighborhoods along our corridor. How do we do that? Instead of designing our streets for the car, which is what we’ve done, we need to design the streets for the people in those neighborhoods.”
What’s more, Mesiti-Miller says he’s astounded by the gap between the city’s population growth and its relatively stagnant housing growth. Between 2010 and 2015, Santa Cruz’s population grew by more than 4,000 people, to 64,220, according to the U.S. Census Bureau.
Yet from 2007 to 2015, only 1,000 new housing units were built in the city, according to a State of the City report from May. (Since 2004, UCSC’s enrollment has increased by 2,700 and the campus has added 2,100 beds. Campus housing has had a 97 percent occupancy rate since 2011, according to the university.)
Meanwhile, the city has an oversupply of single-family homes, which make up two-thirds of Santa Cruz’s housing units. As a result, more people are packing into houses that aren’t meant to be shared, Mesiti-Miller says.
“The technical term for this is ‘unrelated adults living together,’” he says. “It’s strangers living together in houses that are only designed as single-family houses. You go and talk to them, and they say ‘I don’t want to live here. I don’t want to be detached from downtown. I don’t want to be detached from where I want to be spending my time.’
“These are the young people. They’re doing what they can to live in our community, and that means renting a bedroom in a house and sharing a kitchen and living with people you don’t know. You’re living in a neighborhood that you don’t want to be, but that’s what they do.”
Mesiti-Miller, 62, says he traces his interest in affordable housing to 1983, when he moved to Santa Cruz’s eastside from Santa Clara, and it took him six weeks to find a place to live.
The problem is much worse now, says Mesiti-Miller, with 32 percent of people living alone in a city housing system that’s designed for single families and flooded with young people.
“That seems way out of whack with what our community actually needs. If you look around in our community, what we need is smaller, denser, more affordable housing. That’s what we need and we’re going to need that well into the future,” he says.
Mesiti-Miller is also a board member of Friends of the Rail Trail, which supports the construction of a 32-mile biking and walking trail from Davenport to Watsonville along the existing railroad. He wants to see the revitalization of Santa Cruz County’s passenger rail and bus system.
The current transportation system is broken, and Highway 1 congestion affects the entire region’s quality of life, says Mesiti-Miller.
“Who [in Santa Cruz] will say, at 4 o’clock in the afternoon, ‘Oh, I think I’ll go for a walk in Nisene Marks.’ Nobody does that. Why? Nobody wants to sit in traffic,” Mesiti-Miller says.
The crux of his vision for Santa Cruz—dense, affordable housing in pedestrian- and bike-friendly neighborhoods, and a European-standard public rail and bus system—is the implementation of General Plan 2030. Right now, the city’s planning commission is engaged in updating its zoning codes along its corridors.
“The general plan basically is the document that’s going to allow our community to become the community we want it to be, and it’s going to happen over 20 years, 30 years,” Mesiti-Miller says. “It’s the community that our children are going to inherit, and the people who are moving here are going to inherit.”

Next ArticleBehind the Battle in Beach Flats