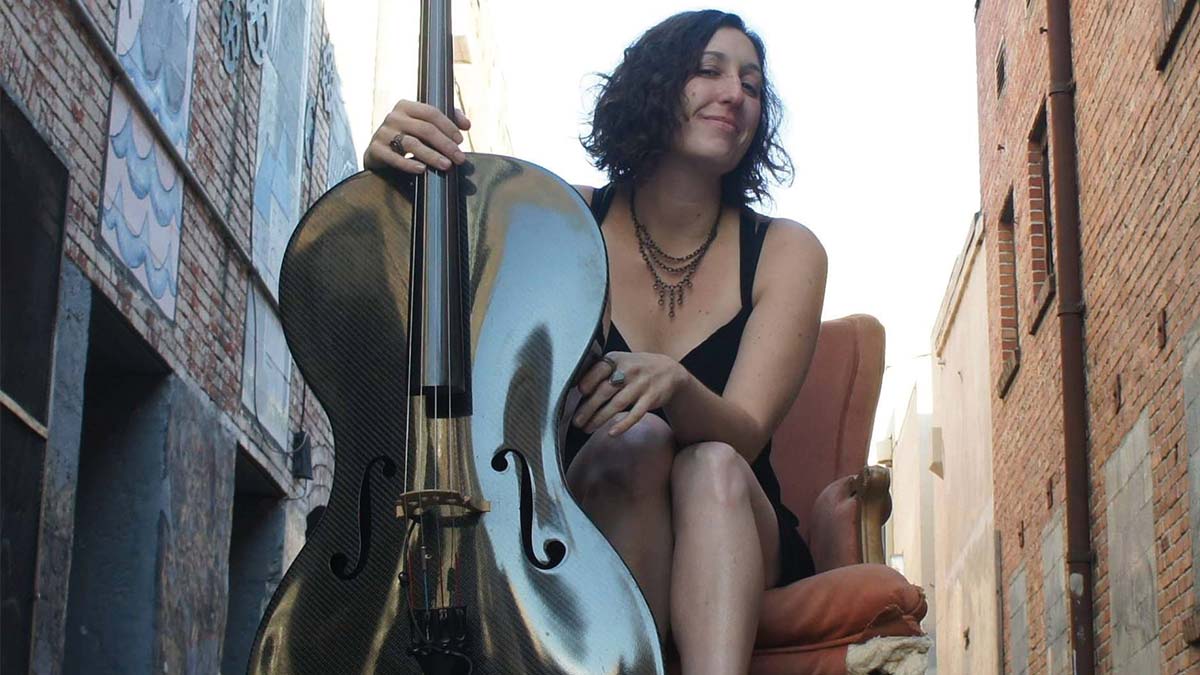 Rebecca Roudman stands front and center in an automotive garage currently serving as a makeshift video set. The classically trained cellist rests her bow on the instrument’s strings, leans forward, plays a few long mournful notes, then breaks into a rousing, sassy rendition of the Robert Johnson classic tune, “Cross Road Blues.”
Though the gap between the rough garage setting and the polished cello sound is wide, it’s not entirely unexpected for Roudman and her band Dirty Cello. A Bay Area outfit that tosses aside musical convention, Dirty Cello keeps its repertoire, sound, and venues unpredictable, performing in flashmobs, marathons and a cave. For a recent recording session, the members went to, as Roudman puts it, “all the weirdest Airbnbs in California,” recording a song at each stop. Along the way, they played and stayed in a yurt, a geodesic dome, a buffalo ranch, a pirate-themed room, a 1970s Airstream trailer, a stone cabin, and a log cabin.
“The weirder the better,” says Roudman. “We like to be adventurous and do weird things. It just happens that our instruments come along for the ride.”
In addition to a good-sized collection of cover songs, Dirty Cello also plays original bluegrass and blues tunes that give a nod to tradition and showcase the musical variety Roudman grew up around. Exposed to classical music early, she picked up the cello at the age of 7, and didn’t put it down—she’s currently a member of the Santa Rosa Symphony and the Oakland Symphony. But her parents were also fans of roots and blues music, and B.B. King was in regular rotation at her house.
Roudman explains that playing the blues and bluegrass on a cello is not a huge stretch. For the fiddle parts, she just plays faster and higher up on the strings, and she says the instrument is a fantastic vehicle for expressing the emotions of roots music and blues.
“There’s something about the blues that is so soulful and lends itself to the cello,” she says. “I know it’s really meant for the guitar, but there’s just something about it that works.”
Improvising over traditional and popular tunes is a key aspect of what Roudman does with Dirty Cello, but she initially had to warm up to the idea. After receiving a music degree in college, she wanted to stretch her musical comfort zone and try something different, but she faced self-doubt about breaking stylistic restrictions.
“My first thought was, ‘I can’t improvise,’” Roudman says. “‘I’m a classical player, that’s not what we do.’”
With encouragement from her then-boyfriend, now-husband and band guitarist Jason Eckl, however, she began improvising with a wide variety of acts, including singer-songwriters, blues bands and hip-hop acts. She immediately loved it.
When asked how she balances the classical with the experimental, Roudman says that she can improvise because of her classical training.
“All the stuff I learned about how to play correctly and how to get around my cello has been crucial to how I improvise,” she says.“ Classical training is what gave me the skills I needed.”
For Roudman, playing covers of popular songs was simply a step further down the road of musical freedom and experimentation. She says she enjoys the challenge of reworking well-known guitar solos for the cello and loves to play familiar tunes.
“We just want to play songs that call to us, that are fun for us, or are fun to listen to on the radio,” she says. “For example, Jimi Hendrix’s ‘Purple Haze’—I’ve always just loved that song.”
Other covers in the band’s impressive repertoire include Guns N’ Roses’ “Sweet Child o’ Mine,” the Eurythmics’ “Sweet Dreams Are Made of These,” Creedence Clearwater Revival’s “Proud Mary,” and the Animals’ “House of the Rising Sun.”
There’s a freshness to the Dirty Cello sound that balances technically sound playing, loose improvisation, and an ever-present sense of fun. To watch Roudman perform, you’d think she’s having the time of her life—and she is.
“It’s the best feeling,” she says. “It’s very freeing. I love being on stage and feeling the energy of the audience. I can’t describe it, but it’s a bit like a rollercoaster ride. It just feels really good.”