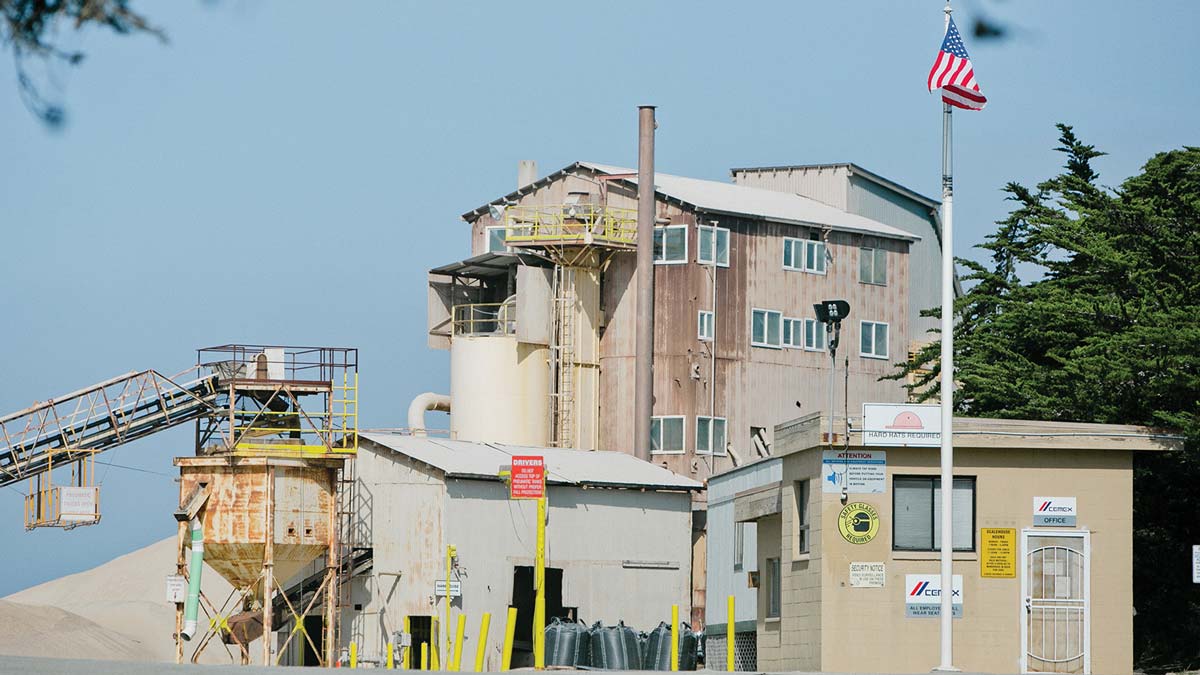 From electronic chips in computers and cellphones to glass, highways, and buildings, sand is a central ingredient of modern life. No other resource in the world, except for water, is used in such vast quantities.
It comes from quarries, like the ones in Wilder Ranch and Felton, and dry river beds. It’s also dredged from the waters off our coastline. In fact, sand is California’s biggest mineral commodity, and the state led the U.S. in the production of construction sand in 2012, producing 84.9 million tons valued at $843 million, according to the California Department of Conservation.

The plant, owned by Cemex, is extracting sand using a floating dredge from a man-made pond on the back beach two miles south of the Salinas River mouth—right along the shoreline of the southern Monterey Bay National Marine Sanctuary.

There’s only one active coastal sand mining operation left in the U.S. Located in Marina, 15 miles south of Watsonville, its owners received a cease-and-desist letter from the California Coastal Commission on March 17, just days before local environmentalists’ planned launch of a campaign to pressure the plant into closing down.
Ryan Kallabis, communications manager at local marine conservation nonprofit Save Our Shores, says it would be impossible to know how much impact, if any, environmentalists had on the commission’s decision to act now on an issue that’s been well documented for years. “We’re not trying to take credit, absolutely not,” Kallabis says, “but we did bring it to the forefront.”
Environmental opposition to the mine comes as deposits of surface sand are slowly being exhausted globally. The mining and removal process is contributing to dangerously high erosion rates. Dunes and beaches, which serve as a buffer against flooding and storms, are shrinking around the globe as a result of the sand mining, and scientific experts are calling the current situation an ecological time bomb.
The plant, owned by Cemex, is extracting sand using a floating dredge from a man-made pond on the back beach two miles south of the Salinas River mouth—right along the shoreline of the southern Monterey Bay National Marine Sanctuary.
Since Cemex purchased the operation in 2005, they’ve been extracting about 235,000 cubic yards of sand, or three million tons, annually, making Cemex directly responsible for up to 75 percent of the annual shoreline erosion along the Southern Monterey Bay, according to a 2008 study by the Association of Monterey Bay Area Governments. That is the highest level of coastal erosion in California, according to the U.S Geological Survey.
“My conclusion continues to be that this [erosion] is more than a coincidence, and that the sand mining is responsible for the bulk of the shoreline erosion of southern Monterey Bay,” says Gary Griggs, director of the Institute of Marine Sciences and professor of earth sciences at UCSC.
Cemex, a Mexican company known as one of the world’s largest building materials suppliers, could not be reached for comment. The company has until Wednesday, April 6, to respond to the Coastal Commission’s letter.
To raise awareness about the issue, Save Our Shores held a film screening of Sand Wars on March 10 at Patagonia on River Street. About 200 people attended, including Griggs and Assemblymember Mark Stone (D-Scotts Valley). Save Our Shores brought a petition calling for the Cemex plant to shut down.
“Santa Cruz County wasn’t paying attention,” says Katherine O’Dea, executive director of Save Our Shores. “Even though the erosion isn’t eroding the north coast of the sanctuary, it is still affecting the sanctuary and we need to care.”
The Monterey Chapter of the Surfrider Foundation has also been raising awareness on this issue and held two of its own screenings of Sand Wars.
The 400-acre area comprising the Cemex plant includes some of the best-preserved dune habitats in the state. Removing this sand not only threatens the structures on the coastlines, but also the sensitive ecological habitats that exist there, says Griggs. Numerous animals and plants residing in the beaches and dunes of southern Monterey Bay are at risk, including Smith’s blue butterfly, listed as an endangered species, and the Western snowy plover, which is listed as threatened.
O’Dea sees the California Coastal Commission’s cease-and-desist letter as a victory, but is concerned that the Cemex plant is going to fight back. “People are expecting that they [Cemex] won’t comply, in which case we will certainly re-engage,” she says.
Monterey Bay has been the most extensively mined shoreline in the U.S., mainly because of the unique smooth rounded amber-colored quartz sand that is in great demand for industrial uses like water filtration, abrasives and industrial coatings.
Sand mining began in 1906 around the mouth of the Salinas River, with no regulations in place until 1960. Six commercial sites popped up at Marina and Sand City. In the mid-1980s, a connection was found between sand mining and shoreline erosion rates, leading to five of the six plants being shut down by the Army Corps of Engineers.

Numerous animals and plants residing in the beaches and dunes of southern Monterey Bay are at risk, including Smith’s blue butterfly, listed as an endangered species, and the Western snowy plover, which is listed as threatened.

The Cemex plant is currently using more than twice the allotted amount of sand initially mined prior to the Coastal Act, a rate equivalent to all of the former sand mining operations combined, according to Griggs.
Because the remaining plant, which was purchased by Cemex in 2005, is removing sand from the back beach, it was exempt from the Army Corps of Engineers’ call to cease all shoreline mining. The plant was also grandfathered in, as it predated the Coastal Commission’s creation in 1972. However, the corporation’s current mining operation is no longer exempt since they are exceeding the scope of the pre-Coastal Act activity agreement, the commission has argued.
Assemblymember Stone, a former coastal commissioner, was a discussion panelist at the March 10 film screening. He said, when it comes to tourism and environmental stewardship, the pristine California coast represents a multi-billion dollar industry that needs to be protected. He believes that even one problematic sand mine could set a bad precedent and have environmental ramifications elsewhere in the state.
Said Stone: “Every little instance that is done to shape and change the coast has an impact somewhere else.”