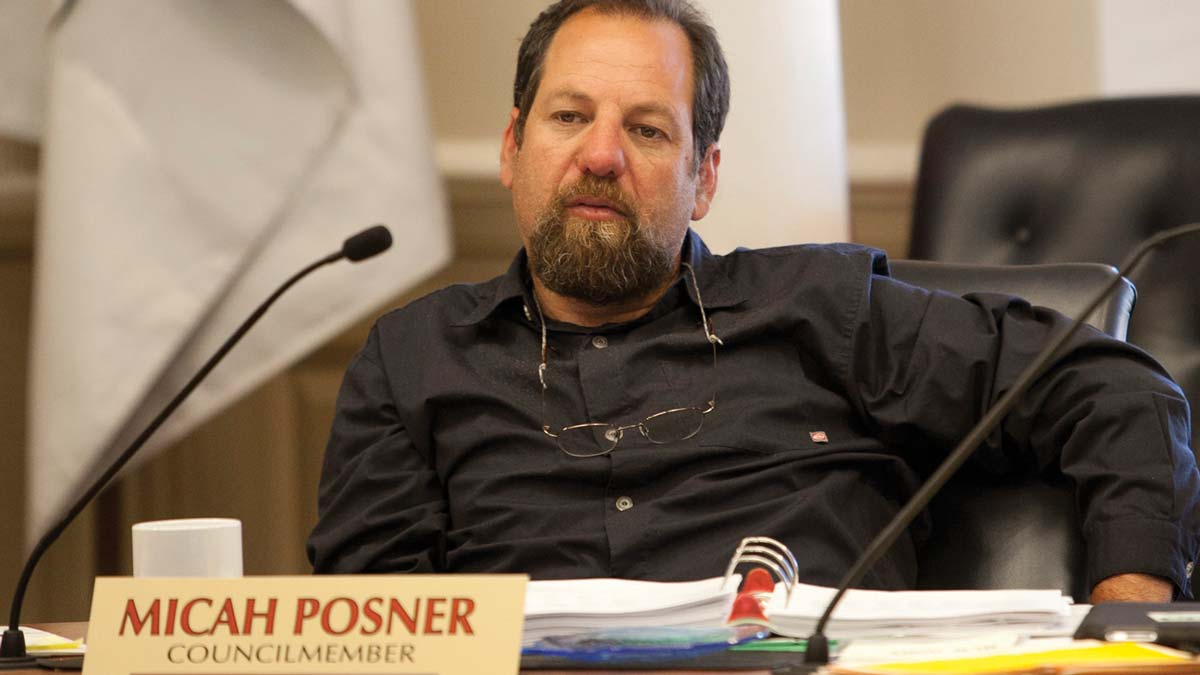 Now that Santa Cruz City Councilmember Micah Posner has admitted to renting out a unit in his backyard that was unpermitted for housing, some of his former supporters are feeling betrayed.
“I put an addition on my house, and my husband and I haven’t had a vacation since 2008, and we’re paying for it, because we enjoy it, but we did it legally,” said Sarah Nash, who voted for Posner four years ago, at a hearing on Posner’s violations on March 8. “And I can’t tell you how totally upset I am.”
Nash, a retired federal employee, stressed that it wasn’t personal—she would be “pissed” at any of the other council members if they had broken such laws, as well—even saying that she felt she was probably going easier on Posner because he’s her neighbor in the Lower Ocean area.
“But I don’t just want my neighbors to put something in their shed and think they can get away with it,” she added, her voice trembling. “I didn’t even think about getting away with it.”
Others told the council they felt it was unethical that Posner had presided over regulations around accessory dwelling units (ADUs)—some of which passed on narrow votes—while skirting the rules on his own.
Posner supporters spoke as well, outnumbering critics 4 to 1 at the meeting. They called his since-abated unit a valuable piece of affordable housing in an increasingly expensive town, and praised Posner for apologizing. Some suggested the council’s whole hearing was part of a larger crackdown on poor and liberal community members—like Keith McHenry, who has been charged with vandalism downtown, and Leonie Sherman, a former council candidate who was called an anarchist by a police officer in 2014.
“This, to me, is one of the final straws,” activist Grant Wilson said.
The council voted to censure Posner, issuing a formal reprimand that has no effect on his ability to serve. Council members also voted unanimously to have City Attorney Tony Condotti send a formal letter to the Fair and Political Practices Commission (FPPC) notifying the group that they are now aware of Posner’s actions.

Upon inspection, the staff found that the unit did not have a bathroom, a foundation, heating, or permits for electricity and plumbing.

Posner voted for the motion, too, saying he understood and respected the council’s decision.
Councilmember Pamela Comstock says she hopes that the letter will relieve the city of any possible legal responsibility should the FPPC decide that Posner did anything seriously wrong. “It’s about the impropriety, and I want it to be airtight in our statement that we didn’t do anything wrong,” Comstock said at the meeting.
Councilmember Don Lane, who in the meeting called Posner’s violation “embarrassing,” says the censure should help the council put this whole thing in the past. “I felt like it was important for the council to make a statement on this and move on,” he tells GT.
Community members were packed into the council chambers benches so tightly that they overflowed into the aisles and lined the back wall. The meeting was at times intense, with people clapping with those they agreed with and yelling at those they didn’t. As Lane described the ethical problems he had with Posner’s actions, one person blurted out, “That’s enough, Don.”
Condotti said that he did not think Posner’s votes on ADUs presented any conflict of interest because the council member’s unit was in a multi-residential zone where such units aren’t allowed anyway.
Posner has taken heat for not disclosing the income from his back unit on his form 700 through the FPPC. He has since updated the paperwork, and at the meeting he provided his tax returns showing that he had reported the income on his income taxes.
A confidential housing complaint about Posner’s house had tipped off city planning staff about the violation. Upon inspection, the staff found that the unit did not have a bathroom, a foundation, heating, or permits for electricity and plumbing, city planning director Juliana Rebagliati says.
Posner has stressed that it would have been difficult to afford the fees for a remodel, but Rebagliati says that staff works with homeowners to try and bring buildings in violation up to code and that there is a way to waive all fees, as long as landlords make their units affordable to renters. “There was no discussion of that. There is a process to waive the fees,” she tells GT. Under the plan, homeowners also must pay a prevailing wage for the construction labor.
Posner, who hasn’t decided yet whether he’ll run for re-election this year, says it would have been impossible to bring the building up to the city’s housing code for a second unit. He and his wife Akiko Minami would like to build a second unit using those same provisions to waive fees, but he says it has been a lesson in permitting. “Essentially I’m starting over, and I’m excited to learn how it works,” he says.
In his remarks last week, Posner said he understands and agrees that public officials should follow the rules and that he especially regrets the impact this has had on his colleagues at the city.
“It’s been a month of apologies, and I think that’s reasonable,” Posner said. “I am a public official, and I understand why the council would want me to speak about this matter and frankly to publicly apologize. So, I want to do that.”