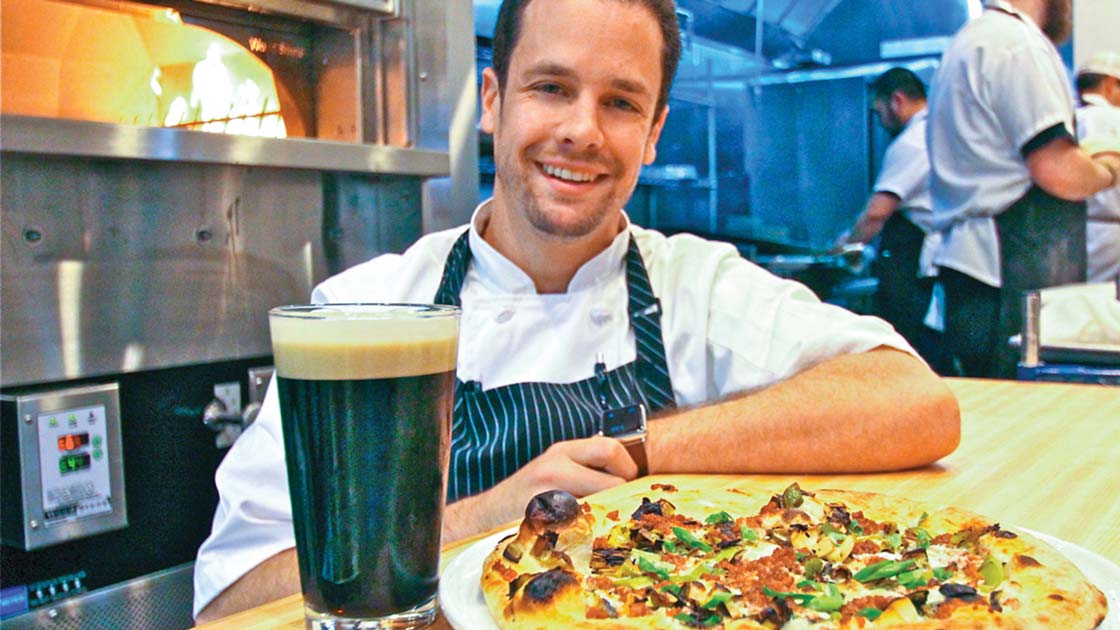 Every day as I return from the gym, I gaze longingly at the various contractor signs still papering the windows of Lillian’s-in-progress, on the corner of Seabright and Soquel. Soon, I tell myself. Soon I’ll be able to feast on hearty Italian food in the old historic Ebert’s space.
Luckily, we can all take our appetites over to the newly opened East End Gastropub, the twin sister of West End Tap. Well, not identical twins, as it turns out. An early look at the East End menu reveals a heightened level of ambition at the new eatery housed in the former Tony & Alba’s at 1501 41st Ave. in Capitola. Chef Geoffrey Hargrave has spun the new menu into some intriguing conceptual regions; for example, goat cheese, leeks and bacon pizza, rye pappardelle, and honey-cured pork belly with Brussels sprouts, faro and fried farm egg. Sign me up! We can expect locally-made artisan beers and lunch and dinners seven days a week. If the mega-scene that causes almost seismic activity over at the West End Tap & Kitchen is any measure, the new gastropub owned by Hargrave and partner Quinn Cormier should shake up the 41st Avenue neighborhood big time.

In the quest to be ever-more welcoming to customers, the savvy conceptualists at New Leaf Community Markets will now host monthly complimentary tastings. Not simply microbrews, but also local ales and/or new craft hard ciders will be presented every third Thursday of the month. So that means that March 17, otherwise known as St. Patrick’s Day, the Leaf will be pouring SCMB’s organic Dread Brown Ale and Lavender IPA, and Surf City Cider will pour a Santa Cruz Scrumpy Hard Apple Cider (note that artisanal brews and ciders have long names). The Scrumpy Cider is both vegan and gluten-free, FYI. Yes, cider is turning out to be the new Chardonnay among aficionados of refreshing creations that contain some but not tons of alcohol. If you haven’t tried one of these shockingly refreshing, brisk, not-your-grandfather’s ciders, then get on over to New Leaf, 1101 Fair Ave., Santa Cruz, on one of these third Thursdays.

The supple—nay, tumescent—almond orange cookie, dusted with powdered sugar and weighing in at a reasonable $3 at Cafe Ivéta took my breath away last week. I have never been able to get past the outrageous gluten-free fudgy cookie, packed with bittersweet chocolate chips, but somehow the almond orange number finally got my attention. The tension of flavors, intense almond pushing against the tangy citrus, is enough to make anyone’s afternoon (pair with jasmine green tea for a serious bliss event). But I was utterly unprepared for the texture; “chewy” is too poor a word for the succulent effect of teeth on cookie. The exterior seemed to melt, while the interior offered a wonderful moment of resistance. Now I have to confess that I adore this cookie as much as the mighty fudgy cookie. Can it be possible? Ivéta has two divine cookies on its mouth-watering pastry counter. 2125 Delaware Ave. on the Westside of Santa Cruz.

Wine of the Week