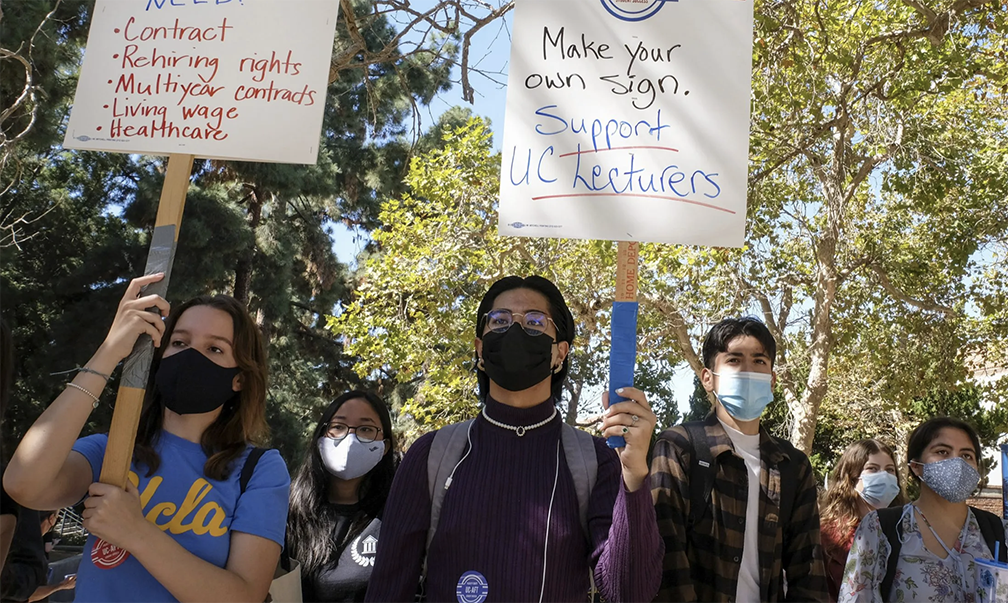 With the threat of multiple strikes this fall that could cancel instruction for a third of undergraduate students, the University of California has inched closer to meeting some demands of its more than 6,000 lecturers. It’s a move that coincides with increased pressure from state lawmakers to resolve the labor dispute that has been going on for more than two years.

The lecturers say the UC’s latest offer from last Monday — which promises increased job security — is a step in the right direction. But they’re not pleased yet because it falls way short of the salary bumps they seek and includes other loopholes they find troubling. Chief among them? The new job stability provisions would kick in next summer, creating the possibility for mass dismissal of current lecturers, the union representing lecturers said.

There’s no “ulterior motive,” said Letitia Silas, head of labor relations for the UC, the state’s third-largest employer, in an interview with CalMatters.

But now there may be signs of resolution for the two sides. For the first time since June, the lecturer union and UC officials will meet Friday to discuss the latest contract proposal.

“We believe that our comprehensive package proposal is fair and competitive, including our proposal on wages,” said Silas, adding that the UC’s latest offer “does respond to the issues that the union has raised.”

It’s a meeting lecturers have sought since last week and threatened to strike over if they had not gotten it. Still, another strike may occur later in the fall if the lecturer union doesn’t get the contract terms it wants. Hundreds of tenured and tenure-track professors of the UC have pledged to cancel classes in solidarity with lecturers.

“I do believe it’s the UC administration’s fault for not coming to a resolution sooner, and for not ending this impasse,” said Assemblymember Ash Kalra, a Democrat from San Jose and chair of the Assembly committee on labor and employment.

He and 11 other assemblymembers have signed a letter addressed to UC President Michael Drake that went out Tuesday, urging him to “prioritize labor peace and job stability for lecturers.” Other lawmakers have issued their own letters with the same sentiment, such as Dr. Richard Pan, a former UC faculty member who’s now a Senate Democrat representing Sacramento.

But there may be limits to mutual understanding. The UC denies that lecturers are being pushed out of their positions to make way for cheaper instructors, a chief union allegation.

Asked whether lecturers leave of their own volition, Silas, the head of UC’s labor relations, said “yes, some do.” Does that imply most leave for other reasons, such as being pushed out? Silas didn’t directly answer that.

“The term ‘pushed out’ is a mischaracterization,” Silas said. “The university has proposed to continue the dialogue with the union … if there does appear to be an issue of a trend, and to address those things with the union.”

For more than two years UC-AFT, the union representing lecturers, has been at a standstill with the UC Office of the President over a new labor contract that provides them with greater job stability.

A CalMatters investigation showed that a quarter of lecturers — instructors typically with doctorates who provide about a third of the instruction undergraduates at the UC receive — don’t come back annually. Though the data CalMatters obtained doesn’t show why lecturers churn at rates higher than other education workers, a key grievance among them is that the UC doesn’t offer continuous work. Instead, most lecturers have to reapply for their jobs every quarter or year and rarely know if they’ll have a job after their short contracts expire.

Core to the union’s demands is a promise to have lecturers evaluated so that their bosses can make informed hiring and dismissal decisions. Such a review system doesn’t exist at the UC for most lecturers, though it does at the larger California State University.

For some students, the lack of an evaluation for lecturers is perplexing.

“I want my teacher to be someone that knows what they’re doing,” said Sofia Stuart, a second-year biology major at UCLA who took part in a protest organized by lecturers last week. Without lecturer reviews, the UC could just hire inexperienced lecturers or renew ineffective ones, she said.

Natalie Lim, another UCLA student at the protest, held a sign calling for multi-year contracts for lecturers. “I want my institution to have morals and it doesn’t really feel like that right now,” she said.

The letter from lawmakers zeroes in on the lack of an evaluation process.

“By refusing to evaluate lecturers or use a merit-based retention process, the University also fails to foster a skilled teaching faculty, instead punishing experience and letting excellent faculty go arbitrarily,” the letter said. “Sadly, UC students are being cheated of educational continuity and dependable mentorship.”

The latest UC offer would go a long way to assuring more job stability for lecturers, but with key caveats.

The UC is also proposing a formal review before the three-year contract, the first such offer in these negotiations and a big win for lecturers. But UC is proposing just an “assessment” before the two-year contract. And the union doesn’t really know what that means. Lecturers don’t have clarity on what factors upon which a review would be based.

The UC’s summary of its latest offer last Monday mentioned a review process after three years but not after one.

Silas, the UC labor relations chief, disputes that lecturers after their first year wouldn’t get an evaluation based on their teaching ability. “I’ll have to say that that’s probably an oversight on my part,” she said, in response to a question about why the summary letter omitted a reference to a first-year review.

Because the average duration for a lecturer at the UC is two years, having job security earlier in their tenures would likely go a long way to lowering lecturer churn.

The formal offer’s language on a review after the first year “doesn’t even come close to the robust evaluation after the third year,” said Mia McIver, president of the lecturer union and herself a lecturer.

But even the new review process after three years comes with asterisks that alarm the union. One says that a lecturer who passes their evaluation and is owed a three-year contract can still be hired for just a year if the department thinks the class the lecturer is teaching won’t be around the following year.

McIver said that may look fair, but what happens if the department decides to keep the class anyway? The lecturer still won’t be able to have the class back, she added.

here’s less movement on matters of pay. The union wants bigger raises than what the UC is offering, which is about 4% in the first year of the five-year contract and 3% annually thereafter. Other lecturers would get additional bumps and extra merit pay. The lecturers say the UC can offer more across the board, citing the 5% increase in state support the recent state budget sent the UC’s way.

The UC argues it offers some of the best pay to lecturers among top research universities. “In October 2019, UC systemwide’s average salary on an annualized basis was $71,068 for pre-six lecturers and $92,693 for continuing lecturers,” wrote Ryan King, a UC spokesperson.

The UC offer on pay

But that number is misleading: More than half of lecturers are part-time, according to a CalMatters review of UC data the lecturer union shared, meaning most lecturers don’t get that annualized pay. And many lecturers work one term but not the next. A CalMatters analysis of wage data shows that lecturers on average make close to $33,000, while more permanent academic faculty make three to six times as much.

Another major issue is how much a lecturer is paid per class. Basically, lecturers get paid a percentage of an annual salary based on the “workload” of each class. The union is upset that the same classes can be counted as, for example, one-seventh of full-time work or one-ninth depending on the campus. They want consistency throughout the system.

For lecturers, those fractions matter: For one, the higher the percentage of full-time work, the greater the pay. Also, health benefits can kick in at around 44% or 50% of full-time work, depending on how many hours a lecturer works in the year. So every extra fraction of workload goes a long way to determining if a lecturer has health insurance through the UC.

“The University of California should be a responsible employer and provide accessible, affordable, quality health benefits and a living wage for all of its employees so that no UC employee must rely on public assistance,” wrote Sen. Pan. His letter noted that some UC lecturers rely on Medi-Cal because they’re ineligible for UC health insurance.

McIver, the union president, doesn’t know. She said they’d rather have a settled contract. “The things that we need to cross the finish line of this contract are not onerous for our employer,” MicIver said. As far as the union is concerned, the ball is in UC’s court.

Friday’s bargaining meeting with the UC “is a positive step,” McIver said. But the union’s lecturers will decide whether they like the offer the UC is presenting, so it’s impossible to gauge how close to a resolution both sides are.

No strike about the contract terms can happen until a state-led labor mediation process runs its course. Both sides are in mediation, but Friday’s meeting is independent of that state-led process.

Previous ArticleCounty Selects Aranda as Artist of the Year