.Preview: King Gizzard and the Lizard Wizard comes to Moe 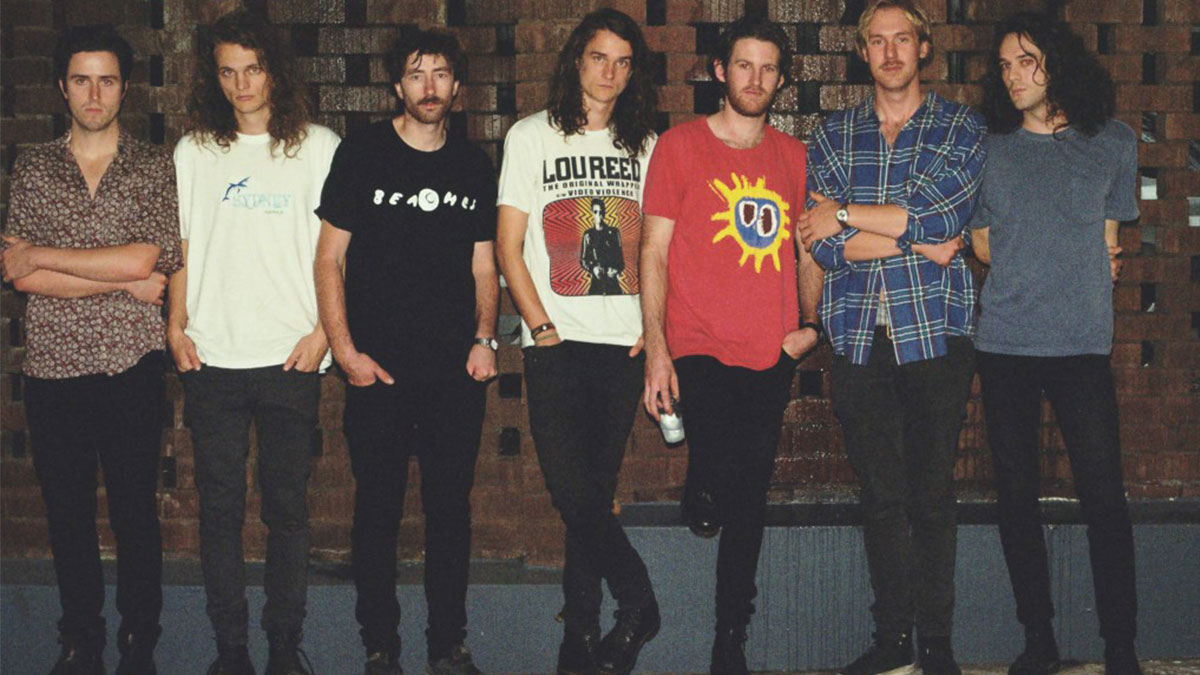 Imagine an album that never ends. Whether this sounds like a nightmare or a really cool idea may depend on how insane a person’s musical tastes are. And chances are, anyone that digs the band name King Gizzard and the Lizard Wizard is on board with the infinite-loop-record concept on principle alone.
Fortunately for whacked-out psych music fans, Australian seven-piece King Gizzard and the Lizard Wizard did in fact release a never-ending album, appropriately titled Nonagon Infinity. All the songs are connected seamlessly, and the last track goes right back into the first track again with no break. The fact that it’s their hardest and heaviest record only adds to the intensity of the record. It never breathes.
“We wanted to drop into the deep end with this one,” says frontman Stu Mackenzie. “The idea was to create one big song. We even toyed with the idea of just calling it one song, but I’m OK if people want to digest the songs individually as well.”
The Australian psychedelic band has explored a lot of territory on their previous seven albums. There’s elements of flowery summer-of-love psychedelic tunes, bits of jazz, prog-rock, psych-pop, and spaced out jams. On Nonagon Infinity, the group mixes high-octane psych-garage rock with elements of ’70s metal and glam-rock.
Probably a more important element than the songs simply being linked is that they are all carefully sonically referential. There are several repeating phrases—a minor refrain in one song might return in another song as a primary riff. It’s actually a very complex interweaving record that was so challenging to make that the group worked on it for years, even taking breaks to focus their attention on other material. They released two albums while slowly chipping away at Nonagon Infinity.
“I didn’t want to put the record together in editing or post or anything. I wanted to feel like we could play it from start to finish in one go if we wanted to,” Mackenzie says. “Talking about making this record makes me slightly anxious. It was definitely difficult, bordering on painful. It wasn’t fun, but it was our most ambitious.”
There are a whole bunch of bands that wave the psychedelic label, but it’s extremists like King Gizzard and the Lizard Wizard that truly fit the label. Not only do they bring weird concepts to their records, they also put together strange accompanying visuals. (Check out their oddball videos.) It’s not just they’re influenced by the late ’60s psychedelic music scene, they actually embody the experimental spirit of the time period.
“I don’t try to pretend like we’re breaking any new ground or anything. What we’re doing is challenging ourselves with the music. The spirit is to explore, even if we just experiment with something that we’ve never done before,” Mackenzie says.
At this point in King Gizzard’s career, they tend to work on albums from a concept-based approach first, and see where that takes them. For Nonagon Infinity, the initial spark was to create their heaviest record to date, which led to linking all the songs, and then the next logical step was to link the last to the first.
The fact that this record took them a couple years is particularly fascinating because King Gizzard has released eight records in only six short years. As they’ve evolved as a band, the urge to create concept records has only increased.
“I always liked records that feel like a whole, and feel like a journey into some place and then maybe a journey out. It’s been a catalyst to being creative, I suppose,” Mackenzie says.
One could spend weeks listening to the intricate self-referential musical themes going in and out of the nine songs on Nonagon Infinity, but the lyrics are connected, too. Each song has its own narrative, and they are connected by all taking place in the same surreal sci-fi world.
“It’s supposed to be some sort of dark sci-fi fantasy, kind of horror thing,” Mackenzie says. “It’s definitely supposed to be throwing you into a world. There’s some autobiographical moments in there too, but it’s not me, it’s a monster or cyborg version.”
INFO: 8 p.m., Tuesday, May 24, Moe’s Alley, 1535 Commercial Way, Santa Cruz. $15. 479-1854.