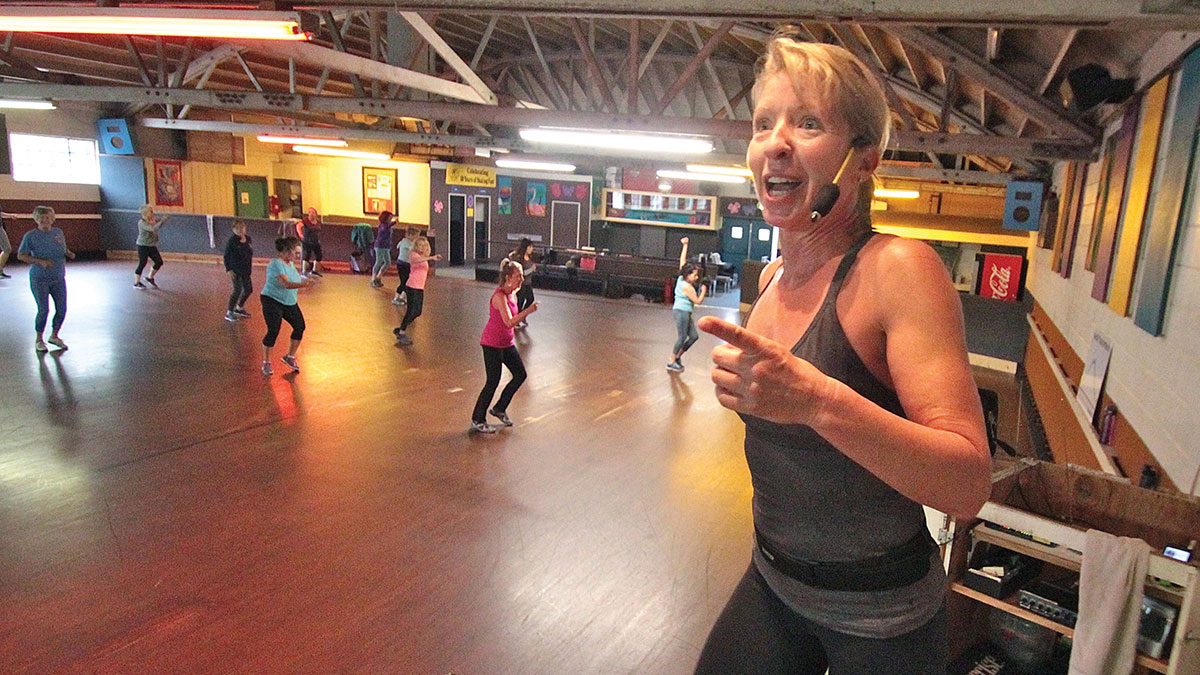 Not many Marine Corps drill sergeants would be able to match Abbi Hartsell’s pace. For 30 years the petite buff blonde has managed to get out of bed at zero dark thirty, strap on her tights and lead dozens of determined Jazzercisers in rockin’ dance routines. Up until this year, when she cut back to only five days and 11 classes a week, Hartsell has taught 17 classes a week.
“You have no idea what a difference it made, just to have a real two-day weekend,” Hartsell says with a grin. I can definitely imagine it. Having been put through my paces regularly by Hartsell for several decades, I can also testify to her uncanny ability to get the best out of us using Jazzercise’s choreographed combination of aerobics and dance, while making it extremely fun in the process.
Hartsell—who face to face over coffee looks ridiculously young for someone with her long professional resumé—admits that she enjoys spending more and more time visiting her sister and family in Hawaii, where she says she will eventually retire. A Santa Cruz native, Hartsell and her mom live near each other. “She may have to think about moving to Hawaii, too,” Hartsell jokes.
Yes, she’s been at it for 30 years, a milestone that was acknowledged at this year’s annual Jazzercise convention in Las Vegas. “It began with Kay Mitchell—she brought Jazzercise [to Santa Cruz County],” Hartsell recalls. “I wasn’t into sports growing up, didn’t do any exercise activities,” she says. “We were horse girls in my family. Until I discovered boys.”
The first Jazzercise class she ever attended was in Live Oak. “I went to a class and I immediately fell in love with it. I was captivated,” she says.
What does Hartsell love about Jazzercise? “It makes people feel successful,” she answers instantly. “It’s challenging yet doable.” Hartsell managed Josef’s Deli at the Rancho del Mar shopping center, then ran weddings and events at the Pogonip Club while working her way up the franchise ladder. “Soon I became a manager at Jazzercise,” Hartsell says. “I knew I wanted to teach.” Then came the move to being an owner. Hartsell explains that Jazzercise, a national organization started 45 years ago by JudI Sheppard Missett with regional franchises, has territories. “We start out by renting facilities. I am on this border where I make money because my costs are low. I would love to own a center, my own free-standing facility like a lot of people have in less expensive areas of the country. But the roller rink is security for me,” she says. Hartsell also owns the Aptos territory. “I teach a few days a week at the Aptos Grange, which has been newly remodeled,” she says. “That’s a wonderful thing.”
“People ask me what are you going to do when your body gives out? And I’ve definitely felt a shift, physically, in the past two years,” she says, rolling her eyes. “Part of me says no, it’s not going to happen to me. But I can feel that I have less energy,” she admits. As a cushion, she’s groomed associate instructors. “I’m embracing my team. I let the younger people teach the butt-kicker programs these days,” she chuckles. “Another change I’ve made is a modified program I teach called Jazzercise Light, geared toward seniors and newcomers.” Even the founder, Judy Missett is now phasing herself into less involvement, says Hartsell.
But Missett, who has ceded oversight to her daughter, continues to keep the brand current, Hartsell contends: “It’s not your mom’s Jazzercise program.”
“In my 30 years, I have learned over 4,500 routines,” she says. How does she keep fresh with it, year after year? “I go to the area meetings. And there’s an instructor’s conference in Las Vegas. That’s a shot in the arm, being in a room filled with all these passionate women, all involved in a program that empowers women,” she says. As an owner of her Jazzercise territory, Hartsell admits the work never stops. “There’s always something you can be doing to promote the business.” She admits she often fantasizes about a cut-and-dried “nine-to-five job where I can just go home at the end of the day and forget about work.”
But “the crowd in front of me inspires me. I just love seeing them connect with the routines and enjoy their own success. It reinforces how wonderful Jazzercise is,” she says. The choreography and the music get her up and going each day. “Yes, I guess I’m tough. I teach that 6 a.m. class,” she groans and laughs. “And I still feel sorry for myself.” But no matter how tired or burned out, “you’re still the brand,” she says.
Check the Jazzercise Santa Cruz and Aptos Facebook page for class schedule and information.