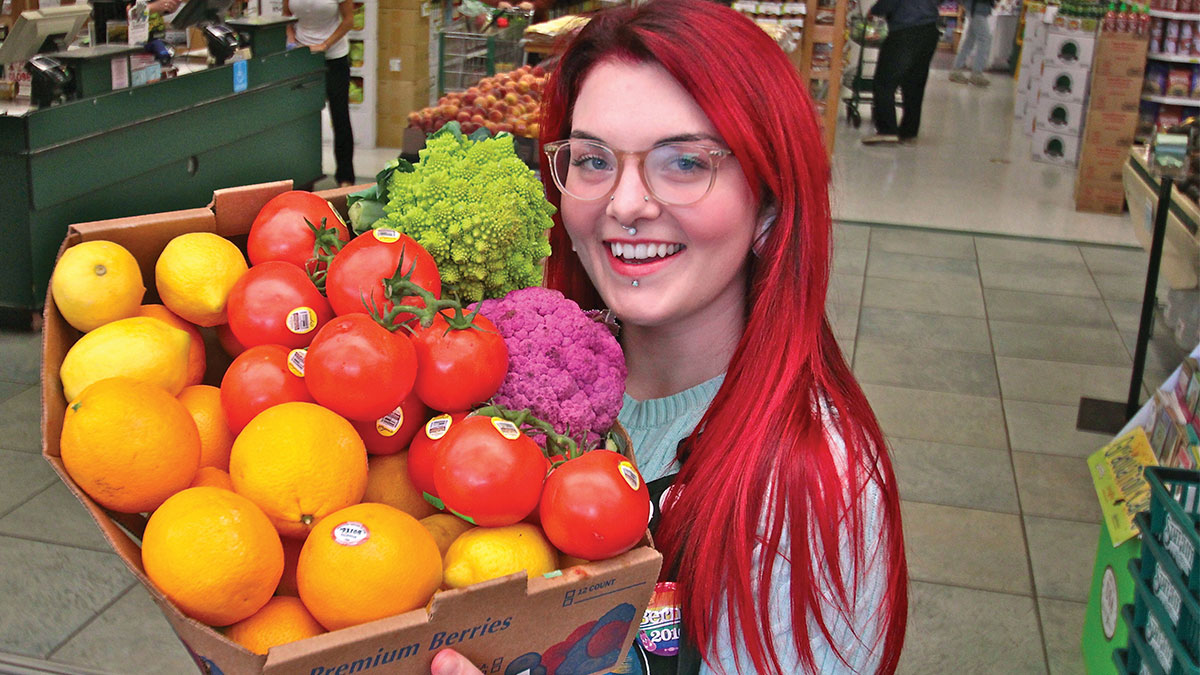 Can it be true? Was it really 47 years ago that courageous natural food entrepreneurs Richard Josephson and Gary Bascou opened up their “alternative” home of bulk whole foods, organic produce, a natural food deli, and outstanding baked goods?
Yes it was, and now the mightily expanded Staff of Life Natural Foods Market—located at 1266 Soquel Ave. since 2011—is celebrating this latest milestone with an afternoon gala from 12:30-4:30 p.m. on Sunday, May 22. Expect lots of neighborhood fun, live music, food, tastings, demos, and of course, good vibes. Congratulations to Staff of Life! I will always covet those incomparable sunflower seed cookies.

A Tale of Two Glutens
As many of us are happily discovering, there is such a thing as gluten-free glamour—for example, the walnut carrot tea cake from Manresa Bread, available locally at Verve. Or, the mighty almond apricot biscotto from Companion Bakeshop.
And then there’s gluten-free glop. Always willing to do the arduous field work needed to stay ahead of the fickle waves of food production, I found my hand reaching out for a box of Bakery on Main™ instant gluten-free oatmeal, which contained (in addition to a variety of intriguing grains) gluten-free oats. Why not? I thought. After enough almond milk, salt, and demerara sugar was added, how bad could it be? Well, dear reader, it was—to be diplomatic—not good. I’ve sampled papier mâché paste with more pizzazz. With the texture of raw dough and the flavor of wet paper, this stuff was inedible. Even with the accompanying sex appeal of chia, flax, amaranth, and quinoa to bolster the sagging performance of gluten-free oats, it was almost comically bad. Goodbye to $4. It seems that the mystical chemical formula owned by gluten is also the very thing that lends structure, toothiness, texture, and perhaps even flavor to the creations in which it turns up. It’s possible that somewhere there’s a gluten-free oatmeal product with something resembling flavor and texture that won’t produce a gag response. But it’s not made in Glastonbury, Connecticut. I’ve suspended my research until further notice, having learned it’s the instant oats that are the problem. Avoid those!

Culinary Changes
Fans of Aptos’ spicy Ambrosia India Bistro are already poised for a new destination. A second installment of Ambrosia is scheduled to open up in Scotts Valley in a few months. Stay tuned. Meanwhile, the wait is finally over! Lillian’s Italian Kitchen (the house of Joe and Charlotte Moreno) has begun taking reservations for dinner at its all-new, spacious digs at the corner of Seabright and Soquel. The vivacious new 80-seat dining room will be open by the time you read this. Now you can exhale and tuck into some serious meatballs and gravy. See you there! lilliansitaliankitchen.com.
Don’t forget the Flower Festival and Feast (Jozseph Schultz!) happening at a Bonny Doon garden estate from 1-5 p.m. on Sunday, May 22. Go to COBHA.org/news for tickets.
And good bye to Austin Kaye and the Back Porch, a delicious and hard-working fixture of our community, moving to San Diego in June. Last Farmers Market appearance for Back Porch will be Saturday, May 28. Stop by, order something mouth-watering and wish the Kayes the best.

Late-Breaking Deli
Restaurateur Paul Cocking called to let me know that he has the green light to purchase the old Sentinel Printers building and launch a deli next door to his Gabriella Cafe. “Along the lines of Gayle’s,” Cocking added, “but with less emphasis on pastries.” Cocking envisions outdoor seating as well as an in-house U-shaped wine and food bar. Major funding is already in place, but Cocking is looking for a few more investors to make this project fly. Maybe you? Invest in downtown culinary history. Contact Paul at 831-457-1677.

Next ArticlePreview: King Gizzard and the Lizard Wizard comes to Moe