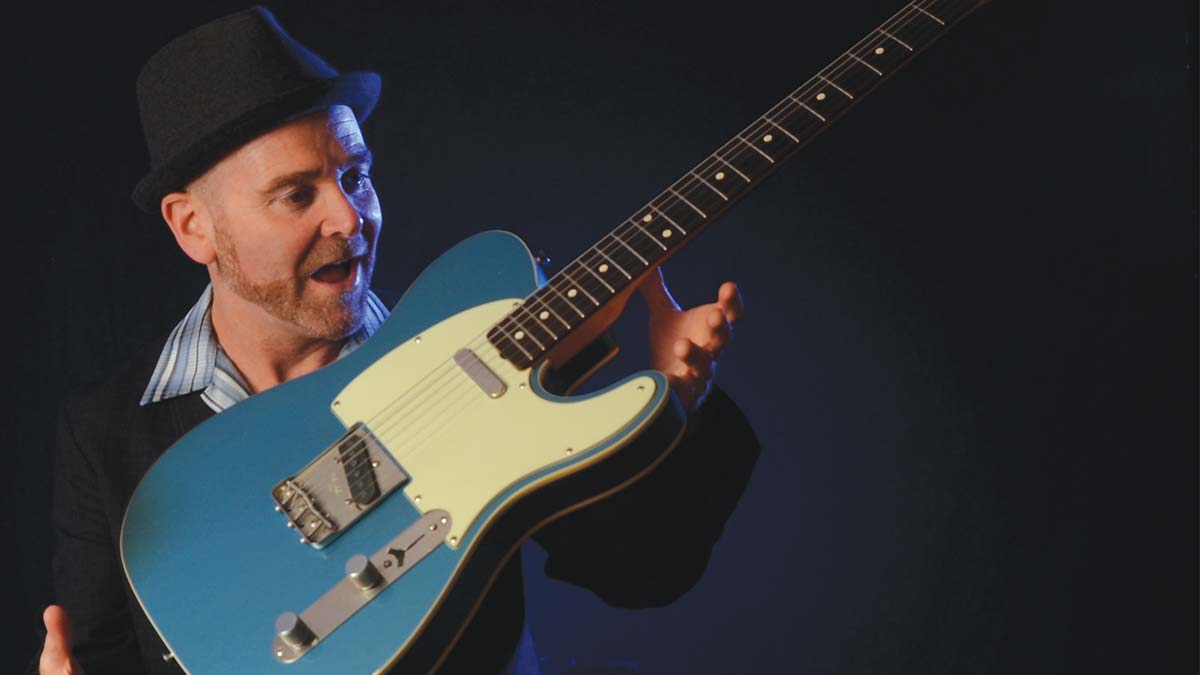 In 1989, Mike Schermer was working a job he hated as a housekeeper at UCSC and playing blues guitar on the side. One day on his lunch break he got a call from Bay Area bluesman Andy Santana about a potential gig that night. Schermer would miss the gig if he went back to campus, so—in what would become a defining moment—he ditched work and played the gig. He and Santana then formed a blues group called the Soul Drivers, and Schermer never worked another day job again.
“We were pretty much immediately working five or six nights a week,” Schermer says. “I was making $50 or $60 a night and I was paying $200 a month for rent. It didn’t get much better than that.”
Now widely known as Mighty Mike, Schermer has become a celebrated blues sideman. He’s performed with an all-star roster of blues heavyweights, including Bonnie Raitt, Elvin Bishop, and Charlie Musselwhite, and he’s lead guitarist for swamp-boogie pianist and singer Marcia Ball.
Schermer has wholeheartedly embraced the role of sideman. He leads his own band, the Mighty Mike Schermer Band, and he writes his own material, but he thoroughly enjoys playing other people’s music.
“I think every frontperson should be a sideperson at one time in their career, just to see what it’s like,” he says. “And vice versa. I’ve worked with a lot of sidemen that complain about this and complain about that, and they have no idea how hard it is to be a frontperson … It would be a good experience for every drummer and bass player to experience that in their life.”
Originally from Los Alamos, New Mexico, Schermer experimented with different styles of music while a student at UCSC. His musical trajectory was forever altered, however, when he saw blues legend Albert Collins perform at Kresge Town Hall.
“It changed everything for me,” he says. “From that first note he hit, I knew what I wanted to do.”
Collins still provides considerable influence and inspiration, even after all these years. Schermer describes his life before and after seeing the legendary artist as one door closing behind him and another opening.
Talking with him is a quick study in blues appreciation. He delights in explaining how all American music has its roots in the blues; that the blues is one of the original improvisational styles; that there are countless sub-genres within the genre; and that its chordal confines enable vast creative expression.
“It’s pretty much three chords with a few substitutions here and there—twelve bars with a few variations there,” he says. “But by boxing it in, it opens it up. There’s a lot more you can do inside of that.”
An energetic and passionate performer who has a reputation for playing his ass off every night, Schermer now calls Austin, Texas home. He moved there at the invitation of Ball to be her guitarist. He describes Santa Cruz as a hard place to leave, but the move has been great for his career. He doesn’t, however, advise moving there as a guitarist looking for work.
“It’s just not a town that you move to as a guitar player unless you already have a gig,” he says. “The guy serving your pizza can probably play circles around you.”
On Thursday, Schermer celebrates his 50th birthday with a performance at the Kuumbwa. He’s bringing his ace band and enlisting the help of local collaborators, including Tammi Brown, Lara Price, and members of the Soul Drivers. The evening promises to be a musical trip down memory lane for longtime fans, as well as a showcase of Schermer’s extraordinary talents and love of being on-stage.
“I try to put the thoughts away when I perform,” he says. “It’s really just about having a good time … Let’s forget about everything and just have fun from the first note to the last note. We can solve the world’s problems later.”

Next ArticleWellstone Center in the Redwoods Offers Unique Fellowships for Writers