.Why the River Street Camp is Working 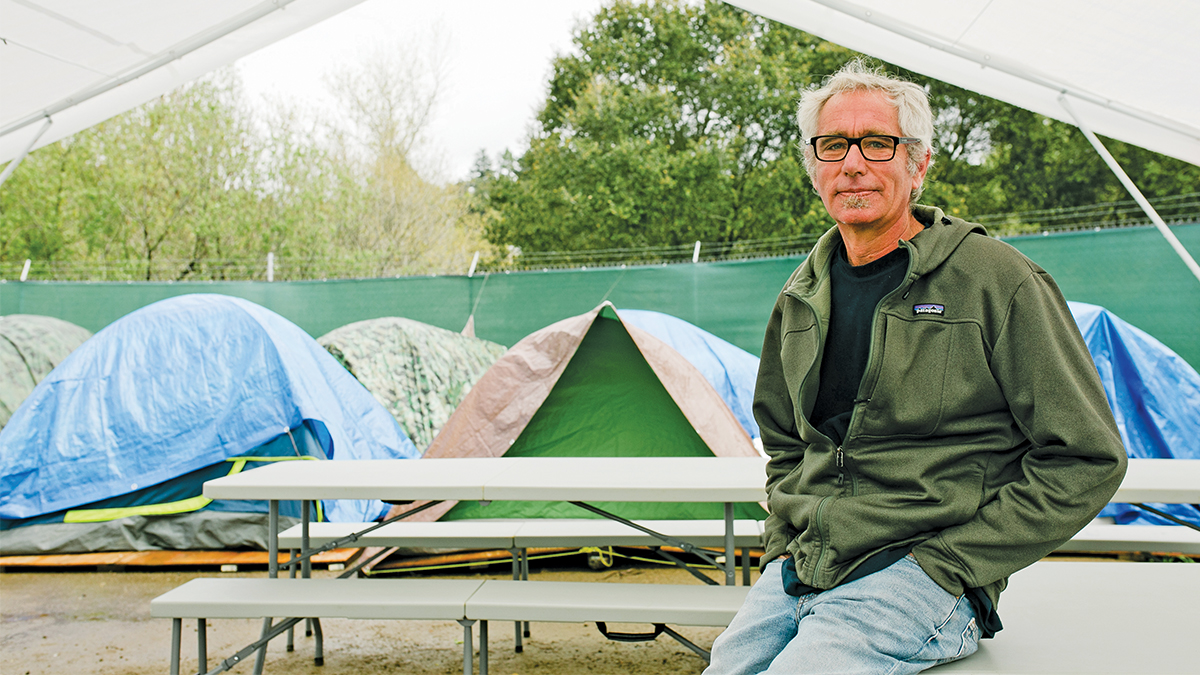 Chris Monteith likes keeping a low profile. The lanky 6-foot-1 54-year-old may have managed to fly under the radar as he’s navigated a wide range of jobs—bike store owner, research analyst, electrician, Costa Rica mountain bike guide—as well as positions at Encompass and the Homeless Services Center. But as director of the River Street Camp, Monteith has had to adjust to the spotlight—he’s pretty much always on call, and in demand. And, despite his reluctance to make himself the center of attention, he seems to be thriving.

“I don’t think they could have picked a better person to lead this. He is so in tune,” says Troy Owen, who lives and works at the new camp. “He knows what to do when stuff pops off unexpectedly. We go to him a lot.”

The camp, located at 1220 River St., is the city of Santa Cruz’s latest effort to address the issue of homelessness, and Monteith is in charge of the site’s daily workings. The unlocked gates are monitored by First Alarm from the outside, and a Santa Cruz Police Department trailer is parked up the street. “This area in here is mine to run,” he says. “The politics, the city, the police are all outside.”

Susie O’Hara, a city analyst, met Monteith through the Downtown Accountability Program, and offered him the job, she says, because she wanted someone with “a trauma-informed approach.” Owen says the camp’s trauma workshop, required for all residents, has helped him de-escalate difficult situations, and lets him think outside the box when problems arise.

Adam Carothers, one of Monteith’s assistants, brings his support dog to work each day. Lucifer, a Brittany spaniel, is Carothers’ preferred tool for handling tense situations. “If anyone’s ever stressed out, I toss him their way,” Carothers says. “Everyone’s a little different, but for most people it brings them right down.”

Clearly, this is the front line of the city’s attempt to deal with its homelessness problem. Monteith says the camp offers fewer barriers to entry than traditional homeless programs. Many of the campers didn’t have access to county services until now.

O’Hara says Santa Cruz County officials have been responsive to Monteith’s requests for help, usually sending someone within the hour. Pets are allowed, although there have been fewer than O’Hara and Monteith expected. Partners may cohabitate in their tents, each of which offers a modicum of privacy. Monteith says that just having personal space generally lowers stress levels for everyone. There are currently 62 people staying in 50 available city-provided tents.

Since the program started a month ago, seven people have left. One went to Janus, and another to Pageant House, a veterans transition home. The others, Monteith says, just decided it wasn’t the right place for them.

“My vision was to create a community that was self-sustaining, self-regulating, where it didn’t need some sort of authoritative factor to regulate everything,” he says. “And I found this to be true. Everyone takes care of themselves for the most part. Those people who are not doing well in the community have left, and that’s primarily driven by the rest of the people who use our services.”

There are two spots for people to gather—a small smoking area, and a larger white tent where food is served. Monteith says they’ve brought some board games and a corn hole set to encourage socializing. Overall, the camp is quiet, and he says most campers keep to themselves.

In addition, 35 of the campers, including Owen, are part of the Downtown Streets Team and earn stipends for cleaning up around the city.

Owen, who joined the camp at the first move-in four weeks ago, says the Downtown Streets Team has helped him make a résumé, secure job interviews and get his life in order. “You’ve got to start somewhere. I just call this a grooming grounds for better things to come,” he says.

Owen says if he had to sum up the camp, “in one word, it would be family.” He shows me what he optimistically calls his “three-room” tent. He’s sectioned off his living room/bedroom, a closet, and the pantry—a box with sandwich supplies and some snacks.

Every day, campers get dinner at 5 p.m., and volunteers come to help serve from 4:30 to 6 p.m., which is the one opportunity the community has to come inside the gates—a setup that Owen admits looks like a prison from the outside, given the the fence’s barbed wire, but he says he doesn’t even notice it anymore.

Each camper agrees to 27 campground rules—including prohibitions against drugs, alcohol and visitors. Campers must arrive and depart the campsite via a designated shuttle. They get access to a storage facility when they sign off on 12 more rules.

Monteith says so far the shuttle service has been the biggest challenge. Administrators have had to change the schedule a couple of times and hope to keep it stable for the rest of the program. He says the drivers try to be as flexible as possible, for instance, when they have appointments. But campers have to be on time to catch a scheduled ride. He says he has actually gone out to pick up people who have missed the shuttle.

To get on the waiting list for the camp, homeless individuals can go to the library at 10 a.m. on Fridays, and Homeless Persons Health Project sends referrals. They keep a few spots open for emergency referrals as well.

The camp is set to end in three months, when the fiscal year ends. O’Hara says that June 30 is a hard end date because the $400,000 in funding for the project—which comes from the salaries of two vacant positions at the city manager’s office—will run out then. The county is paying $100,000 toward the camp, a quarter of the camp’s cost. City leaders are working on the next steps for a successful transition into “phase two,” which O’Hara says will involve a structure in a leased lot, but she doesn’t know where it will be yet.

Even the idea of an end date is already making residents like Owen nervous.

“When they do end it, you’re going to come in here and see the scratch marks,” he says, “and they are going to be mine.”

Next Article5 Things to Do in Santa Cruz County Mar. 28-Apr. 3