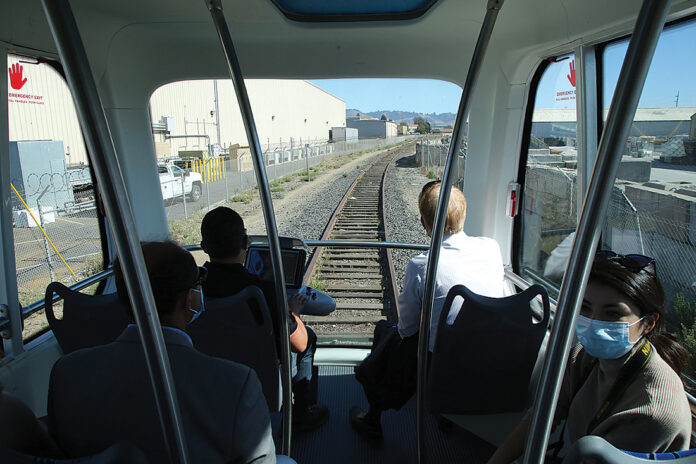 SANTA CRUZ COUNTY—Santa Cruz County Regional Transportation Commission Director Guy Preston on Thursday recommended that the agency not pursue a partnership with a company hoping to provide electric passenger rail service from Capitola to Santa Cruz, citing the cost of fixing tracks and other ongoing expenses.

Preston estimated that the cost to the county would be between $50 and $60 million to prepare the tracks for passenger rail, in addition to maintenance and operations costs.

Preston also suggested that a half-cent sales tax could help to fund those repairs, if the county does pursue a passenger rail plan.

“RTC staff does not recommend pursuing this unsolicited Public Private Partnership (P3) proposal or any other potential P3 proposal for passenger rail service,” Preston wrote in a staff report.

The issue came before the Commission on Sept. 1 as an unsolicited proposal by Chatsworth, Calif.-based TIG/m LLC to run electric rail service along the county’s line. That company provided a demonstrationduring two weekends in October.

County staff and TIG have estimated that it could take 14 years to complete plans for passenger rail.

No action was taken during the discussion, although many of the commissioners who heard Preston’s report said they hope the county does not abandon plans to eventually bring passenger rail service.

“I hope we stay open and at least continue to look for funding sources … so we can continue to seek passenger rail in the near future,” said commission alternate Felipe Hernandez, adding that he wants freight service to continue in South County.

But despite signaling that passenger rail could be a reality in the future, the commissioners appeared to agree with Preston’s financial concerns.

“We’ve gotta realize we don’t have $50-60 million to pay for the repairs we would need to move forward,” said Commissioner Bruce McPherson. “We have to be realistic in what we can do, because if we say we can do a lot with passenger rail immediately, that’s a false promise.”

McPherson also expressed concern about having to tap into the commission’s discretionary fund to pay for the repair.

Commissioner Manu Koenig, who made his opposition to passenger rail service a cornerstone of his 2020 campaign for Santa Cruz County Supervisor, said the demonstration highlighted the poor condition of the tracks.

Koenig also cited traffic tie-ups he said were caused by the demonstration, and of pedestrians walking close to the track.

“I don’t believe that rail-trail is possible,” he said. “It’s actually a physical impossibility given the physical constraints of the track.”

Previous ArticleBacked by Report, Advocates Ask for Safe Pesticide Use