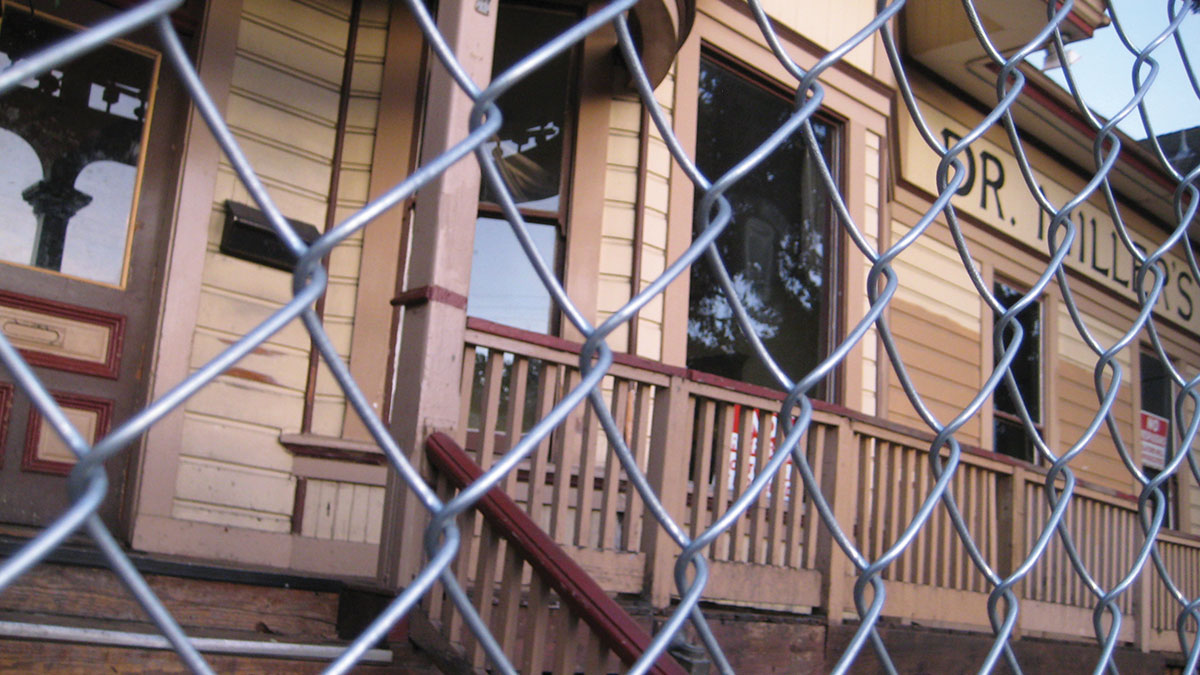 Sitting on the concrete steps of 418 Cedar St., John Glenn lights up a cigarette.

Glenn—no relation to the famous astronaut—is spending a Sunday repairing a well-known yellow Victorian that he owns. Black letters, painted high on the wall, read “Dr. Miller’s,” a sign harking back to the structure’s days as a dental office. Glenn and his friend Vic Brooks, a contractor, are working on the building, which was formerly Caffe Pergolesi, the popular downtown café, known for its cheap organic coffee and laid-back vibes, that closed in late August.

Recent months have seen the closures of other high-profile Santa Cruz businesses, as well—Goodwill’s Bargain Barn, Mr. Goodie’s Antiques, Logos Books & Records, Jedzebel, and Seven Bridges Organic Homebrew Supply. When Pergolesi owner Karl Heiman announced that, after 44 years, his café would close for good, it seemed to fit right into the trend—but that didn’t make it any less depressing.

Activist Wes Modes told journalist Bradley Allen—who broke the news about Pergolesi via Facebook—that everyone knew the reason for the closure, saying, “You can no longer afford to live here. You’ve been priced out and so have all your favorite places.”

But Glenn, who owns the property, says he didn’t raise the rent or evict anyone. Glenn claims Heiman wasn’t doing his share of maintenance, and so he offered his tenant a month-to-month rental agreement, which Heiman declined. “It was all in the lease. I don’t want to throw darts, you understand? That’s what I want to put on the record. He wasn’t asked to leave by me,” Glenn says.

Heiman, for his part, says there is no asset value in a business that doesn’t have an annual lease. An 1886 Victorian like the old Pergolesi building requires a lot of upkeep, Heiman says, and he claims that Glenn had been slow to make repairs that the lease required him to make on his end. Both men declined to send GT a copy of their agreement.

Glenn has no timeline for filling the building, which he cannot tear down because it’s listed as historic, and he says he has no idea what kind of business will open there next.

The minutiae is relevant because the demise of this beloved café has come to epitomize, for some locals, an unwelcome shift toward a Santa Cruz that is not even affordable for its longtime businesses and residents.

So if the reality of Pergolesi’s closure is somehow more complicated, what does that say about the narrative surrounding it and the other shuttered businesses? Are the closures really all connected? And if we learn the causes, will anyone be able to do anything about it?

Glenn and Heiman both point to an isolated problem that plagued the old café: the homeless, who would loiter at the corner of Elm and Cedar streets by Pergolesi. Heiman says he was never able to get city councilmembers or the police to do anything about the issue.

Of course, one could still argue that the transient issue is, in fact, connected to increased costs, in a county with both a well-documented housing crisis and a growing homeless population. Heiman says the factors are complex.

“I hate to say the word ‘homeless,’ because there are about 10 different demographics that go into homelessness,” Heiman says. “There’s the family that lost their home. There’s the vet that’s homeless. There are the mentally ill that are homeless. Our problem was just the people who were drunk and would hang out all the time by the café.”

Heiman, who serves on the Think Local First board and still owns Mr. Toots Coffee House in Capitola, says people have been telling him that Santa Cruz will never be the same after the attrition this summer.

“I heard it from another person today,” he says. “A business owner said that everything is changing and going away. I’m sure there are lots of reasons for all of it. I’m just not sure everyone has the same reasons.”

At least on the surface, the reasons for the closures don’t appear to be connected.

The Bargain Barn moved to Salinas, where it tripled its floor space. The owners of Mr. Goodie’s Antiques retired, as did Logos owner John Livingston, reluctantly leaving behind an operation that he says had not been profitable for years. The owner of clothing store Jedzebel did not agree to an interview, nor did the management of Seven Bridges, although it’s been no secret in the brewing community that the cooperative had always been difficult to run, in part because of its commitment to certified organic products.

Another business, the sushi restaurant Mei Garden, closed after selling its Ocean Street property. Next door, its tenant Coffeeville, which had developed a fervent following in less than two years of business, had to move out as well. Coffeeville, Pergolesi and Jedzebel all closed the same day—Sunday, Aug. 27.

It’s possible that if the recent summer seemed bleak for local businesses, that’s because it really was, at least according to Teresa Thomae, the director of the county’s Small Business Development Center (SBDC)—and she doesn’t see things getting better. Thomae says the recent shift in the Santa Cruz economy is more than just a matter of perception, and the threats facing the local economy are real. The underlying trends right now, she says, are increasing rents, mixed with the growing threat that online sales pose to local retail.

“I still think that locally owned small businesses are going to have a place here,” she says. “They always will. But with the reality of what square footage costs, it’s getting harder and harder for anyone with a small business to survive.”

Thomae says that many business-owning baby boomers are looking to retire, and she hopes employees are ready to step up and try to buy local institutions when the time comes, something she wants to facilitate through the SBDC.

Thomae is currently developing a retail outreach program with the Downtown Association and Santa Cruz economic development director Bonnie Lipscomb that will launch in November. Also, retail expert Robert Gibbs will be returning to Santa Cruz at the end of October for a few days, Lipscomb says, to update his 2010 business analysis, on a contract of about $10,000, aiming to provide some guidance.

Meanwhile, more chains have found their way to Santa Cruz. A few blocks north from the old Coffeeville location, a Starbucks opened in July. A few blocks further, a Habit Burger Grill and a Dunkin’ Donuts are on the way.

Coffeeville owner Kendra Mcqueen is currently working with the Watsonville Planning Division to open a new Coffeeville location in the East Lake Village. She looks forward to hopefully opening soon down in Watsonville with Mike Goble, her life and business partner, although she hopes the South County town doesn’t change much.

“It really has a lot of potential. It’s a neat little town,” she says. “Everyone I know from when I grew up who has purchased a house has purchased in the South County. We’re getting priced out—not to diminish what’s already there in Watsonville, because I really value the history and what’s there.”