.Ann Hazels on her Vision for the Tannery’s Central Gallery 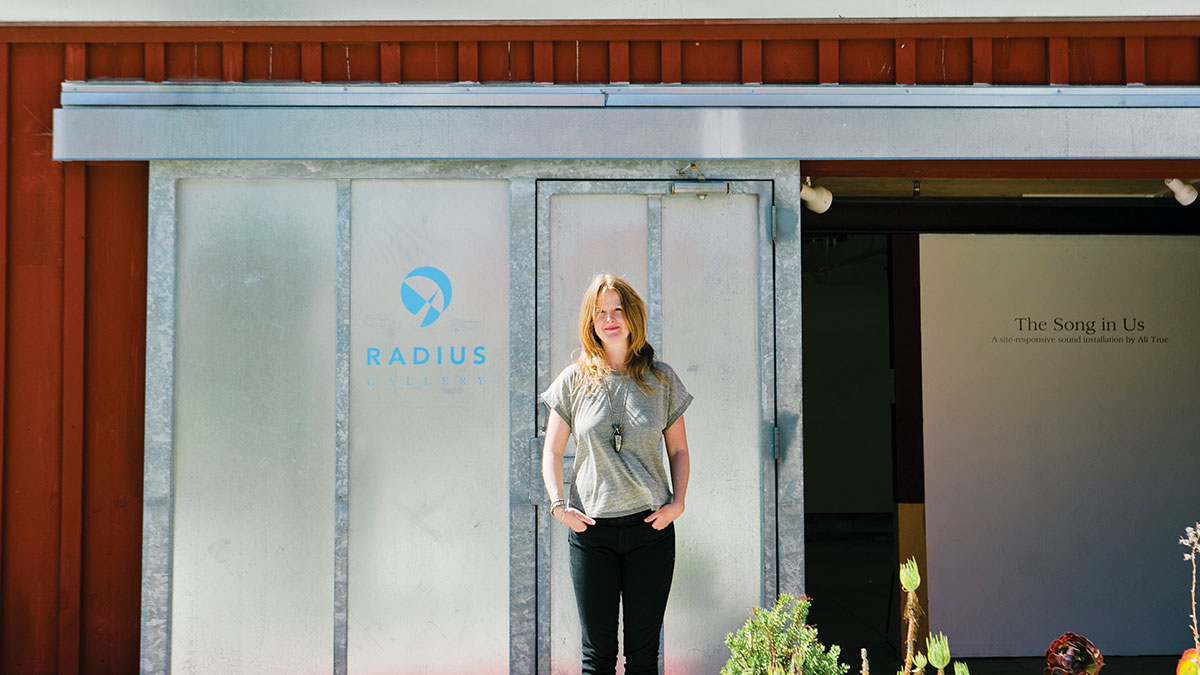 For five years, the crisp space within the Tannery Arts Center complex has served as a salon of surprises known as Radius Gallery, where owner/director Ann Hazels regularly experiments with ideas of exhibition. An army brat, Hazels grew up all over the Midwest before college in Kentucky, followed by various art internships in Baltimore.

“I began with a six-week residency, and I stayed for five years,” she recalls with characteristic sparkle. To support her ceramics practice, Hazels wisely honed her “day job” skills as a gallery administrator. “I was always a clay artist,” she contends, “but I thrived on interaction with the public. Something happens when visitors experience your work. A gallery is access to something bigger than we are.”

Admitting that she “thrives on chaos,” the multi-talented entrepreneuse was fussing with the Radius interior when I arrived on the eve of a special performance. “I’m fed by other people’s input,” she admits. “I’m still a clay artist, and try to get into the studio here at the Tannery once a week—and will often be there for two-week stretches when I’m working on a piece for a show.” Hazels did her homework before making the move to Santa Cruz. “When a friend told me that Santa Cruz was a mecca for nonprofits, that did it!”

Hazels’ background in fundraising and nonprofit administration launched her move to this area. “I did fundraising and development for the Colligan Theater here at the Tannery. It’s fascinating how people spend money,” she observes.

“Connecting people with their interests,” has formed the heart of her career thus far. Fluent in the languages of art and development, Hazels offers Radius as a place for communication around the overarching theme of visual experience.

“I’m limited with what I can do here, financially,” she admits. “I can only offer small stipends to artists who show.” And the way she does that is by making the Radius space pay for itself. “No flashing lights yet, but it’s been a welcoming community. The part that was hard was the gallery itself. It’s getting more interest all the time, and I get requests from artists who are interested in showing here.”

A couple with their three children come in to look around as I talk with Hazels. Immediately, the kids begin picking up bits of interactive sculpture and using them to explore a sound installation. Their delight echoes throughout the gallery. “Sometimes people approach me about projects—that seems to happen organically,” she explains. “People really want to show their work, so I’ll pick something that I’m interested in; for example, an installation.”

She plots out the gallery schedule a year in advance, and closes each year with an invitational. “End of the year is the spirit of giving. Why not give art?” Radius is nontheless a commercial gallery...

What feeds her? “The changes and the variety. We’re open Wednesday through Sunday, noon to five, and I try to be here during those times,” she says. “Organizations like Catamaran will rent the space for receptions. I’m here for most of those events.” Her 18 years of art biz experience pays off. “The vocabulary is natural to me.”

Hazels says she still does contractual work for nonprofits when need and opportunity arise, but admits she still needs to make art. “I exhibited here at Radius recently with three other artists—I did pieces about windows and reflections, water and clouds.” Admitting that she has a desire to do “big things,” Hazels says that gallery success would mean being able to pay artists commissions. But for now, it’s crucial to make people respond—and laugh.

“The next show is wild,” she promises. “I want people to come in with fresh eyes.”

Previous ArticlePreview: The Coffis Brothers and the Mountain Men