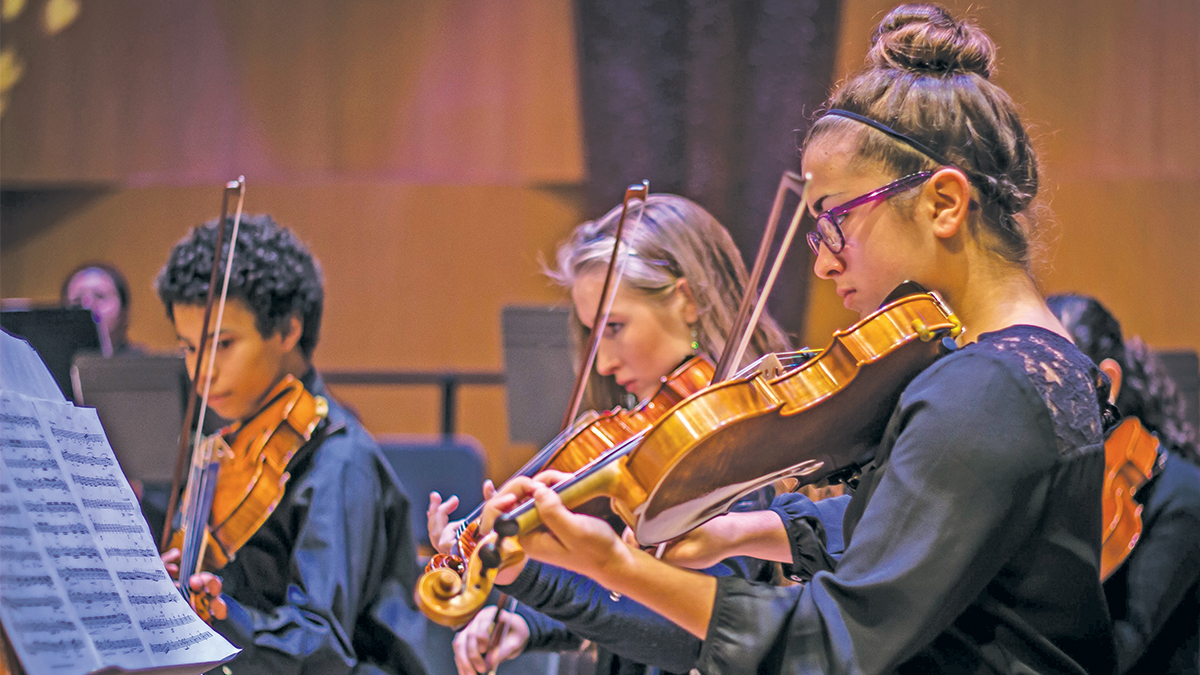 The triumphant thunder of Beethoven’s 5th symphony is the first order of business. It’s the next-to-last rehearsal before the Santa Cruz County Youth Symphony’s fall concert, and fine-tuning is the name of the game.

Music Director Nathaniel Berman—a respected Bay Area conductor and member of UCSC’s Music faculty—takes the small podium and announces the areas that need work that evening. Two dozen sets of teenaged eyes follow his guidance with laser focus. He reminds them of tempo and balance of volume among instrumental sections. They respond. He demonstrates by singing the pitches and tempos. They respond.

After 10 measures of Beethoven, he stops them to make a particular point about phrasing.

“It’s just a little bit slow,” he tells one section of the chamber-sized orchestra, composed of 26 players—brass, woodwinds, harp, and percussion balanced by 12 violins, violas, and cellos.

“With very few schools offering string programs of any kind now, and fewer band programs than there were in past years, there are simply far fewer kids taking up instrumental music.” —Music Director Nathaniel Berman

Next, another crucial passage. “Let’s start at measure 125,” Berman says. The sound swells to fill the rehearsal room. Now it all slows down to work out the kinks. It’s all about fine-tuning the difficult passages so that in performance the entire musical selection will flow from start to finish.

“For a conductor working with young musicians, one of the biggest challenges is actually helping them develop the ability to use their musical tools—like technique, musicianship, and expression—in coordination with their ears and eyes,” explains Berman. “No amount of artful gesture on the part of the conductor can make that happen. So instead, we talk about these things and do them again, and again, and again.”

They are playing a very famous movement of Beethoven’s 5th right now, the “da da da DUM” part. They sound exactly like a symphony orchestra. “153—one more time,” Berman says with a smile, then raises his hands and gives them a downbeat. The rehearsal weaves back and forth from going over little passages smoothing out glitches, to then playing through the entire sections. The focus is absolute. The director hums and sings and practically pulls the phrases from individual sections. The strings sound quite beautiful, melting yet powerful.

“Pick up to 254,” he says, pointing to 16-year-old Mia Balsley, who begins her lovely oboe solo. “Playing with the youth symphony has taught me to challenge myself, as a musician and as a person,” she admits. “I just love the atmosphere and am grateful to be able to play with others who enjoy music as much as I do,” says the young musician who began playing oboe only two years ago.

“OK guys, let’s play it through,” Berman says after some final tinkering. “I love seeing the young players’ pride and satisfaction in their work,” he tells me, admitting frustration with the current state of music education. “With very few schools offering string programs of any kind now, and fewer band programs than there were in past years, there are simply far fewer kids taking up instrumental music,” says Berman.

This group of students is a notable exception. “Commit to the piece,” he encourages them. “Don’t be afraid to make a mistake!”

I’m frankly amazed. These are teenagers, yet they are completely engaged. No shuffling, no whispering—complete focus. The musical dynamics are impressive. The symphony members can move from a hushed pianissimo to a stirring fortissimo with grace and confidence.

After they have run through the entire piece, Berman wants the strings to experiment with several different interpretations. Violinist Laura Wang, age 12 and soloist for the program’s Mendelssohn violin concerto, has studied her instrument for eight years. “This is the first time that I am going to play a big concerto with a symphony,” she reveals. “Being a member of the youth symphony has trained my ear to listen to all the other parts. It is a very fun opportunity to play thrilling pieces and improve your musicianship,” she says.

Berman sings the way he’d like them to play—more detached. No, that won’t work. Go back to the way you were doing it first, he decides.

The director’s critiques, usually couched as suggestions, are clear and easy for the musicians to adopt. “We lag a bit at 31, then it rushes. Play on the front side of the beat,” he suggests to a section that has come in a bit late in one thorny section. When they respond, he shouts, “Yes!” They grin.

“I know it’s an insane level of concentration that’s needed right here,” he coaches them. This is what it takes. Playing through dinnertime, doing homework later. But there’s a huge payoff. Getting to be part of a moment of creative magic. A live performance.

“The satisfaction of seeing the kids mature and identify as musicians is really profound,” says Berman, who urges them to “play light!” at an unforgiving moment. “Again!” They repeat the tricky part. He nods. “Again!” They play it again, better. And one more time, until it’s perfect and crisp. After an hour and a quarter of exhausting focus, they will break for 15 minutes, and then continue on for another hour. Afterall, they have a concert to play.

The SCCYS Fall Concert of Beethoven, Shostakovich and Mendelssohn is at 3 p.m. on Sunday, Nov. 12, at the UCSC Recital Hall. Tickets are $15/adults, $10/seniors, and free for ages 18 and under. More info at sccys.org/concerts.

Previous ArticleBehind the Scenes at Two Doors in Scotts Valley

Next ArticleMountainfilm on Tour, Save the Waves and Reel Rock 12 Film Festivals