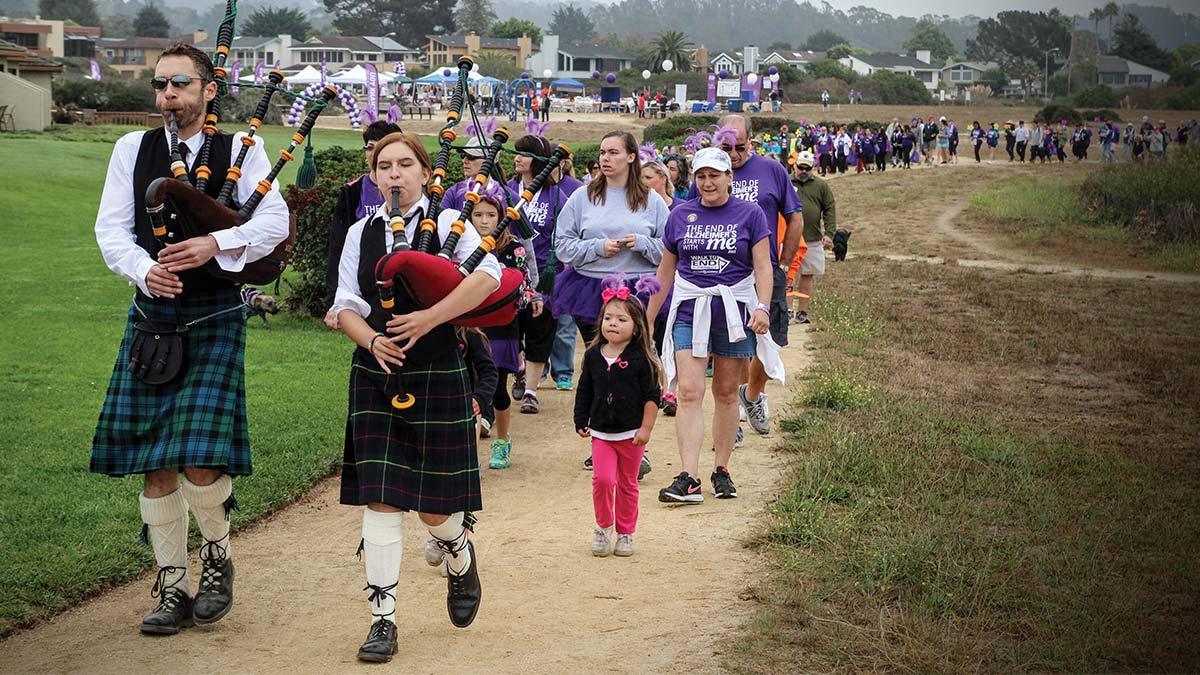 Margaret Hammond, a Capitola local, feels a heaviness of heart when thinking of her husband Lloyd, a retired teacher, principal and coach who was diagnosed with Alzheimer’s disease in 2006. He died in 2012 from respiratory failure due to end-stage dementia.

With grief, Hammond recalls the day the car was missing, and Lloyd hadn’t returned by dark. As she got ready to call the police, he pulled into the carport.

“He had been in downtown Santa Cruz, purchased something for me, and then had fallen.  He arrived back home with a bag of broken glass,” she remembers, adding that she had to restrict his driving after that. “There were many close calls. Another time we were downtown, and while he went into the bookstore, I waited for him in front. When he didn’t return, I asked a bicycle policeman for help, and we spotted him waiting at a bus stop. He had gone out the back door.”

She knows that she was fortunate, she adds, to have help from family so that she could attend evening support groups at the local Alzheimer’s Association. There were times, too, when she felt like just giving up, but the caring staff showed her that she was not alone, she says. “Thinking about this today makes me realize the importance of the Alzheimer’s Association’s many services. It’s all there,” she says of the group, which is hosting its big annual event this weekend.

The 25th annual Santa Cruz Walk to End Alzheimer’s on Saturday, Sept. 24 will take participants along the beach at Seascape Beach Resort and nearby park. Bagpipers will lead the walk, as is tradition at the Aptos event, with Taiko drummers performing from the beach. More than 500 area residents participated last year, raising $197,330. This amount contributed to the $77 million raised nationwide for care, support and research efforts for those impacted by the disease.

Alzheimer’s is the sixth leading cause of death in the United States, and it’s the only cause of death among the top 10 that cannot be prevented, cured or even slowed. Currently more than 500,000 people die from Alzheimer’s disease each year, translating to 57 deaths every hour.

Formed in 1980, the Alzheimer’s Association advances research to end Alzheimer’s and dementia while enhancing care for those living with the disease. Organizers across the country are hosting 629 walks in support of the cause this time of year.

Event registration for Saturday’s walk begins at 8:30 a.m. with a tribute ceremony at 9 a.m. and a Zumba warm-up before the walking at 10 a.m., which includes a 3-mile trail and a shorter option.

“The longer walk is partially on the beach, often including the sight of dolphins at the halfway point,” says Dale Thielges, site director of the Alzheimer’s Association’s Santa Cruz office. “The 1.5-mile walk is around and through Seascape Resort.” If those are too challenging, the association invites people to bring family and friends, and stay up on the bluff where they can learn more about Alzheimer’s disease, advocacy opportunities, clinical studies enrollment, and the many other support programs.

Participants who raise $100 receive a T-shirt. Following the walk, a complimentary lunch will be served, compliments of Seascape Beach Resort.

Michele Boudreau, communications director of the Northern California and Northern Nevada Alzheimer’s Association, is asking the public to request Congress continue its fight against Alzheimer’s by increasing research funding with an additional $400 million in 2017.

“While Congress has recently provided additional funding for Alzheimer’s research at the National Institutes of Health (NIH), the commitment continues to fall far short of the need,” Boudreau says. “For every $100 that the NIH spends on Alzheimer’s research, Medicare and Medicaid spend $16,000 caring for those with the disease.”

To join the walk, sign up at alz.org/walk or contact [email protected] for more information. The staff needs more volunteers to help with setup and on Friday afternoon and the day of the event. If interested, contact [email protected] Access support for Alzheimer’s is available via a 24/7 Helpline, 800-272-3900, to help families across the country stay connected and supported.