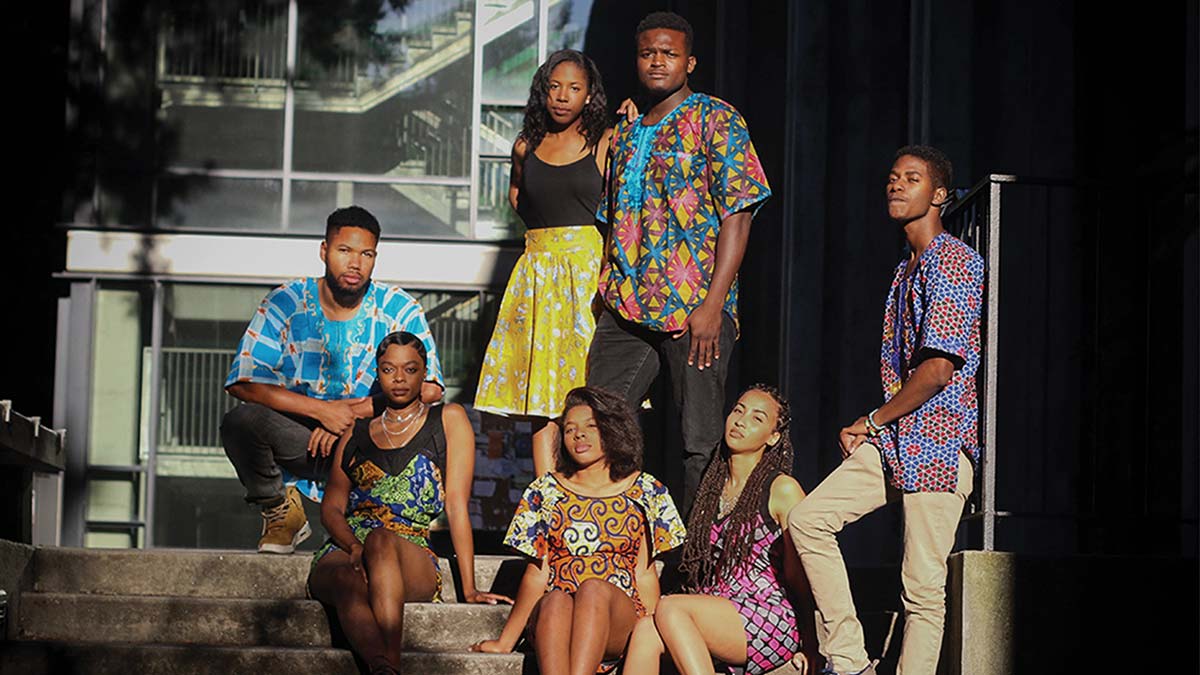 When Wanjiku Muhire wants to get her favorite kind of chai tea, she has to fly to Kenya.

“For years I grew up watching my mom having to coordinate relatives and flights to bring back tea from Kenya, through whoever was traveling—they’d have to bring back a whole suitcase of tea for everybody. What day and age are we living in that we have to personally import day-to-day essentials that belong in the pantry?” says Muhire, chuckling.

“No Italian comes to the U.S. and struggles to find Italian food. It’s such a foreign concept to a lot of Africans to be able to access their culture in the same immediate ways.”

That’s why Muhire, 24, joined with a handful of other recent UCSC graduates and current students to create a business that would meet that need: a black-owned online marketplace for all things African.

Kuuza Here—a name that roughly translates to “sell here” in Swahili—launched on Aug. 21. The site offers modern and traditional African fashions, as well as other accessories, like home decor items. It’s quickly adding sellers, and each item listed has information on where it came from, who made it, and its tie to Africa—like the light blue dashiki from Lola’s African Apparel which is traditional West African fashion for men.

For Muhire, savoring the taste of a regional beer (for her, that’s Kenya’s Tusker) keeps the comfortable feeling of home alive even in a new environment, as does the ability to buy a traditional item of clothing. Muhire, Kuuza’s CEO, was born in the Bay Area to East African parents, but her Kenyan mother, Ugandan father, brother and sister all returned to Nairobi, Kenya, when Muhire was a freshman at UCSC. Her craving for tea sparked the idea for Kuuza Here, although she is still working to bring that particular item onboard.

The goal is to eventually make the site a one-stop shop for all things African—whether it’s spices, food, tea or clothing—that people can’t easily find in stores here, says Jordan McClanahan, the company’s director of Marketing and Operations. There’s a gaping need for such a platform, says McClanahan, 23, because most websites that are geared toward African products typically sell only women’s fashion. And others can simply be overwhelming.

“We said ‘Let’s create a platform that’s not just like Etsy, where you have a million different things,’” says Muhire, noting that in Etsy’s African category, it can be difficult to stand out. “Let’s put you on a site that’s exclusively geared to what you’re selling.”

Kuuza Here is for those who want to maintain a connection to the continent, but it also has the potential for larger impact, says Eron Lake, Kuuza’s chief technological officer, who designed the website.

“At the root of it is economic empowerment of the black community,” says Lake, 20. “One of the things that has the largest effect on the African American community has always been poverty and economic restriction.”

Highlighting black-made goods from black-owned businesses is a step toward that sense of empowerment, Lake says, and with it he wants the site to provide an opportunity for all black people to partake in a shared heritage.

He notes that Americans originally from Europe, Asia and the Middle East often have at least an idea of what countries their lineage originates from and how to trace it. Countless African Americans, though, can’t readily access that kinship because their families are part of the enormous diaspora forced centuries ago by the Atlantic slave trade.

When enslaved people were bought and sold, buyers would receive a bill of sale which included physical characteristics like age, height, weight, musculature, and sometimes where the sale took place—but not who came from where. They sometimes included first names and, rarely, surnames that often belonged to former masters, but there was no uniform system in place, so when sales broke up families it became virtually impossible to trace bloodlines.

“As black people, you grow up and you don’t feel a connection to any kind of heritage. A lot of times it’s like, ‘Well I’m black, so I know I came from somewhere in Africa, but [I have] no real clue,’” says Lake. “There’s a notion for young black people trying to connect to their roots, and a need to reconnect with the continent, with Africa.”

One thing that the 45.7 million people of African descent in the United States have in common, Lake says, is that they can have a relationship with the entire continent.

“Even though I don’t know where [I’m from in Africa] specifically, I can wear clothes from East Africa, South Africa, West Africa—they’re completely different styles, but I feel a connection because I know there’s a similar struggle that everyone went through,” says Lake. “I can do all I want to do to support my culture but there’s nothing like the feeling of wearing the clothes, eating the food, or just partaking in the culture directly. It’s a feeling of really getting in touch with your roots and showing respect.”

And for those without an ancestral link to the continent, modern or otherwise, they can of course still wear the clothes and buy the traditional items from Kuuza Here. It’s all about respecting the item, the history, and the culture, says Lake.

“Everyone can partake in empowering the black community,” he says. “Everyone should appreciate Africa, not just black people.”

The Kuuza team wants shoppers to experience the site’s tagline, “Shop like you traveled,” says Muhire.

“We want people to embrace the site in a way that allows you to know if you spend a dollar on this site the money is going back to the continent to support someone who is working to support themselves,” says Muhire. “It’s going to impact them in a real way.”

Next ArticleShould Edward Snowden be pardoned, or should the government throw the book at him?