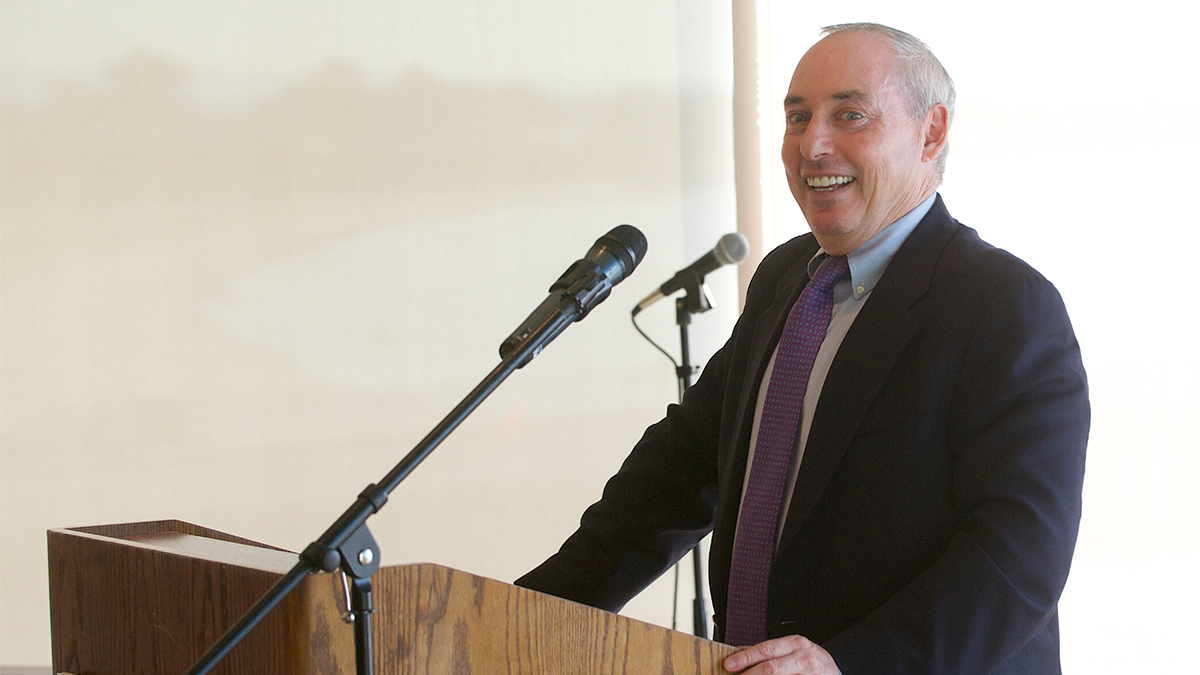 California political analyst Dan Schnur posed a question to the Santa Cruz Chamber of Commerce on Tuesday, Jan. 23, at the group’s annual member breakfast. Unemployment is at 4 percent nationally, and yet most Americans’ optimism these days remains in the gutter, defying all conventional wisdom.

“So here we are in this time of remarkable economic growth and job creation, but there’s still—according to public opinion polling, and just the conversations we have in our lives—a sense of disquiet. So how could that be?” asked Schnur, who teaches at USC and UC Berkeley. “Why do we have, by most traditional measures, such a sordid economic outlook, and why are people so unsettled?”

Before politics, the 8 a.m. event began with breakfast. The chamber’s new Chair Mark Mesiti-Miller introduced the board’s new members in front of a coastal backdrop at the Dream Inn’s Aquarius restaurant.

In his talk, Schnur painted Santa Cruz as a fortunate town—lucky to have the beach, Schnur’s favorite tortilla chips at El Palomar, and what he calls a “community spirit very rarely seen.” It seems fitting that the chamber would bring in a political analyst at a time when no one seems willing to talk about anything besides elections, even when the midterm races are more than 10 months away.

More than looking ahead, Schnur wanted to examine lessons from the recent past.

“In the 2016 election, not even two years ago, we heard a lot about the angry American voter: Americans are furious, Americans are livid. Underneath every angry person is a frightened person,” said Schnur, explaining that he was speaking as much as a father and a teacher as he was a political expert. “And so let us talk for just a moment about the frightened American voter.”

In 2016, older and less-educated frightened voters, mostly on the right, went for Donald Trump, Schnur said. They didn’t attend college because they were told, in their day, that they didn’t have to in order to make a living. They worked their fingers to the bone, with the goal of retiring comfortably with a reliable pension—something that, for many Americans, looks less reliable than ever.

Younger and more-educated voters, meanwhile, mostly on the left, broke for Bernie Sanders, Schnur said. Many of them went to college and graduated into the worst financial crisis since the Great Depression.

Both groups, Schnur explained, have done everything asked of them, and with little to show for it.

“The factory worker and the barista really have a great deal in common,” Schnur said. “They’re motivated by the same fears, because we are going through a time of economic and social change, and our political leaders haven’t told them how to navigate that change.”

Frightened voters, he explained, run from the things that scare them, just as all frightened people do. Leaders, he said, do something else, entirely—pointedly dropping a not-so-subtle hint to a room filled with leaders.