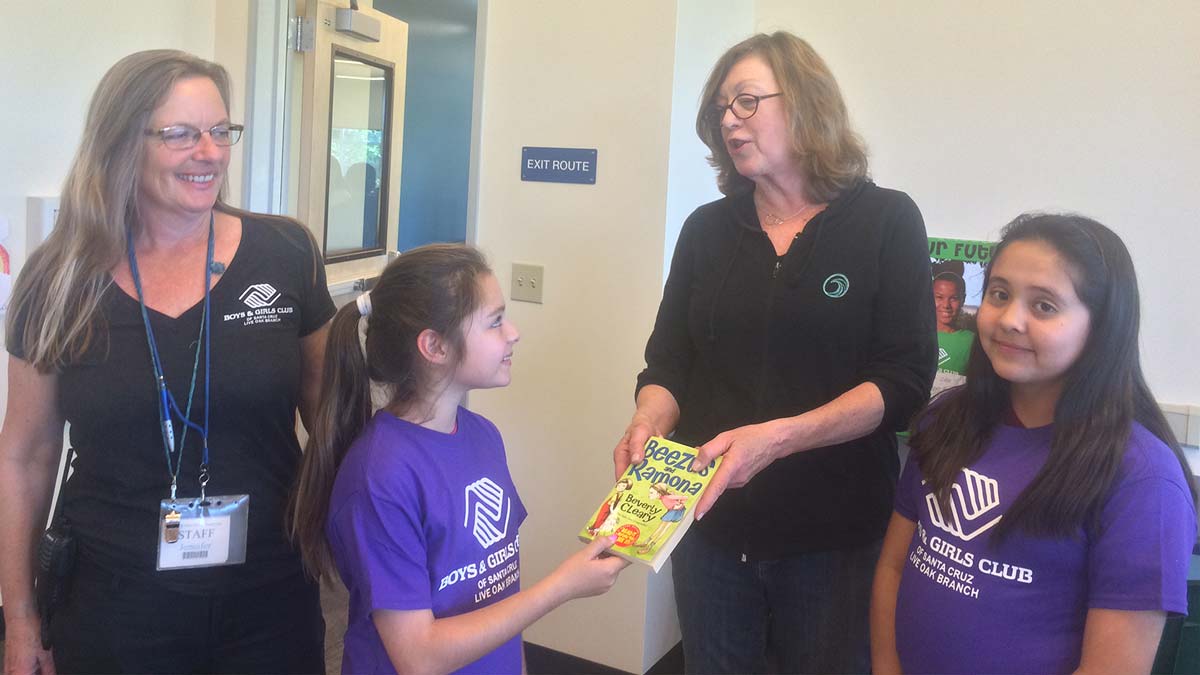 Pam Randall is wheeling a cart of 350 books into Live Oak’s newly opened Boys & Girls Club. It’s Wednesday, April 13, a milestone day for Randall, a board member for local nonprofit Free Books For Kids, which is about to hand out book number 25,000.
“I’ve got classics. I’ve got Hardy Boys. I’ve got the Little House on Prairie series. For our 25,000th book, I chose this one,” she says holding up a copy of Beezus and Ramona. “Beverly Cleary just turned 100 years old. She’s still alive. She wrote this book when I was a little girl, and she lives near Monterey.”
The tradition of passing out books began in 2009 when Malcolm Kushner, a former teacher, started a group called Free Books for Teachers, which eventually distributed about 20,000 books throughout the county. The effort paved the way for Free Books for Kids, the all-volunteer group that started in 2014.
Randall, a retired principal for Del Mar Elementary School, estimates that she has 1,000 more books scattered around her garage.
“They’re along the back wall. They’re on the washer and dryer. They’re on [my husband’s] workbench,” Randall says, as children scurry around her, thumbing through novels. “We can still get the car and motorcycle in, but all the way around are books. I have to be diligent about distributing our books so that we can still park our vehicles in there.”
Randall goes to the Bargain Barn, Goodwill’s Harvey West outlet, to buy books by the bag, with each bag coming out to $6. “You want to get as many books as you can in there, so it’s like a little game of Tetris to get all the books in the bag,” Randall says.
Meanwhile, Kushner, who now lives in Sacramento, buys books by the palette from a Salvation Army in Northern California, where he has expanded distribution, and drives extra books down to Santa Cruz. The group spends almost all the money they raise on books, which come out to 4 cents a pop, on average, Randall says. They donate the books to kids at after-school programs via the Beach Flats Community Center and through groups representing farm workers.
Jennifer Sherry, the unit director for the Live Oak Boys & Girls Club, says she loves when the club gets several copies of the same book, and they’re able to launch a book club.
“They can each read, they can each interpret, and they can discuss,” Sherry says, sitting across the table from Randall. “Without her, we wouldn’t be able to do that.”

For more information on Free Books For Kids, including how to donate, visit freebooksforkids.org or check out the group’s Facebook page.

Next ArticleShadow of a Drought