.Shadow of a Drought 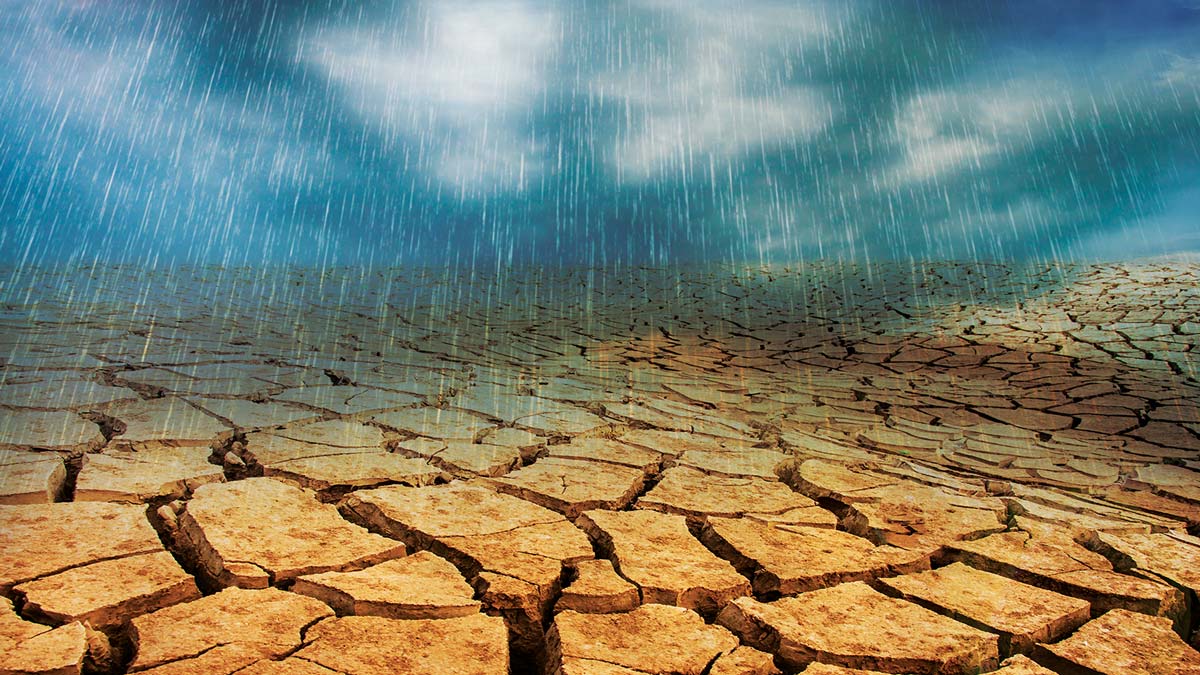 Two dozen rented rowboats floated all Saturday on Loch Lomond, captained by weekend fishermen hoping to surprise some largemouth bass. For three years, nobody fished the Felton reservoir, due to closure from drought, until it reopened in March, following a stormy El Niño winter.
The creeks are flowing again and the reservoir—an important water source for Santa Cruz—is brimming.
Santa Cruz’s water department has lifted its mandatory rationing, and many locals, who have grown accustomed to leaving lawns unwatered and toilets unflushed, are sighing with relief, believing that El Niño has ended the unprecedented drought.
But what many don’t realize is that a danger lurks underground, and Santa Cruz County’s water problem is bigger than the four-year drought. A favorite analogy local water experts use to describe the county’s water problem is that of an “overdrafted bank account.”
The county’s main water source is underground basins, water-bearing rock and soil from which wells draw. In the winter, rains deposit water back into the basin by seeping through layers of soil, rock and clay to reach the water table below.
For decades, starting in the 1950s and accelerating with population booms in the 1980s, the county has drawn from its underground basins faster than the rains can replenish them. In January, two of the county’s three main basins were designated by the state as “critically overdrafted,” the most dire classification.
As of mid-April, the El Niño winter brought 31.8 inches of rain to the county, 110 percent of normal for the season to date, according to the National Weather Service. That was enough to get rivers and streams flowing again, but nowhere close to refilling the basins.
Unlike the rest of the county, Santa Cruz has quickly recovered, since it relies almost entirely on rivers, streams and its main reservoir, Loch Lomond. Only five percent of the city’s water comes from underground sources.

The state water board has the final say on whether the state’s drought is officially over, a decision it will make by the end of the month.
The state’s drought outlook is more complex this year, since El Niño rains hit the state unevenly. Parts of Northern California are no longer considered in drought, whereas Southern California has seen almost no change.
As of April 13, Santa Cruz County was classified as “abnormally dry,” the lowest of five levels of drought, according to the U.S. Drought Monitor, a weekly map of drought conditions produced in part by the National Oceanic and Atmospheric Administration (NOAA).
That’s a significant improvement from three months ago, when most of the county was in “extreme drought,” the second-highest level.
Heavy rains in January and March have improved the local drought outlook for the meantime, but researchers predict greater weather extremes for California—hotter, drier and longer droughts, punctuated by colossal storms.


A Stanford University study published this month predicts a “feast or famine” weather pattern for California, a warmer future with large swings between huge storms and severe droughts, similar to the current unprecedented drought.
Also, on April 14, NOAA reported an increasing likelihood of a La Niña season this November. La Niña is the atmospheric counterpart to El Niño—meaning a drier winter is likely ahead, especially in Southern California.
So for Santa Cruz, that means this winter’s rains are just a temporary fix.
“We don’t have a supply problem,” says Menard. “We have a storage problem. What that means is there’s plenty of water in the system in the winter. We just don’t have a place to put it. So if we solve the storage problem, we won’t have a supply problem.”
“But until we solve this storage problem … we are extremely vulnerable to shortages in years that we don’t have adequate precipitation.”

By the end of the month, the state may also set water use reduction goals for each district, like it did last year.
Menard said she is confident that Santa Cruz will meet any goals set by the state, even without mandatory rationing, since many customers now have drought-friendly landscaping and low-flow appliances.
However, the rest of the county, which accounts for 80 percent of the county’s water use, has a more dismal outlook.
Soquel Creek Water District, which serves 38,000 residents between Soquel and La Selva Beach, has one of the county’s two critically overdrafted basins. The Soquel Valley basin is the district’s sole water source.
The El Niño rains had “an almost insignificant dent” on recharging the basin, says Ron Duncan, the district’s manager. Rains take years to penetrate the ground and refill the aquifers, the water-bearing parts of the basin. Even several heavy rain seasons in a row wouldn’t solve the district’s problems, he says.
“One way we could fill the aquifers back up is to stop pumping for eight years,” Duncan says. “We can’t do that, but that tells you the magnitude of the problem.”
Complicating the issue is saltwater intrusion, which happens when the coastal basins are drawn below sea level and pressure sucks seawater inland into the underground basin. Once seawater creeps inland, it’s tough to stop. Further south, in Monterey County, seawater has nearly reached Salinas, roughly 10 miles inland, according to 2013 data.
When saltwater reaches a well, the well is contaminated. So far, in Soquel Creek’s district, saltwater has been detected underground along the coast at Pleasure Point and near Seascape, the southern third of its district.
“Seawater intrusion is coming our way, as we speak,” Duncan says. “If current conditions persist, it’s just a matter of time before it hits our production wells.”

The county’s other critically overdrafted basin belongs to the Pajaro Valley Water Management Agency, which serves mostly agricultural customers, as well as Watsonville residents. The Pajaro basin supplies the region with 98 percent of its water.
In the Pajaro Valley, seawater has already crept 3 miles inland in some places, according to Mary Bannister, the agency’s manager.
She refers to a map of where the basin’s water is below sea level, year by year. Like a tumor’s growth, it shows the area of depleted aquifers stretching outward each year.
“The ‘scary map’ is what I call it,” she says. “In red, it shows that groundwater levels, all the way back to the San Andreas Fault, were below sea level [in 2013].”


“That’s terrifying to us. Seawater is more dense than freshwater. Not only do we need groundwater levels to be at sea level, we need it to be above sea level by 10 or 20 feet,” says Bannister. “If we’ve got groundwater levels at or below sea level all the way back to the fault [10 miles inland], we’re inviting that seawater front to move inland.”
Agriculture uses 85 percent of Pajaro Valley’s water. Over the past few decades, farmers have shifted from apples to more water-intensive crops such as berries and lettuce—which is part of the reason the valley’s basin is overdrawn, Bannister says.
She adds that while growers use most of the water, they also drive a $616 million local crop industry, which helps pay for big-ticket water conservation and water supply projects.
For example, a $48 million Watsonville recycled water facility built in 2009 produces 4,000 acre-feet of water each year, paid largely by state and federal grants but also by fees from growers.
One acre-foot of water is 326,000 gallons, enough to supply two families of four in the Pajaro Valley for a year.
“We’re searching for every drop of water we can get our hands on to try to solve the problem here,” Bannister says.

In 2014, Gov. Jerry Brown signed the Sustainable Groundwater Management Act, which requires the formation of local groundwater agencies to draft and enact plans to save their basins within 20 years.
In March, the Santa Cruz Mid-County Groundwater Agency was formed, which includes elected officials, water district staff and private well owners. A plan has yet to be made.
However, districts have already started collaborating and creative solutions are being tested.
Soquel Creek Water District recently completed a feasibility study for a recycled water facility that would purify wastewater otherwise destined for the ocean. The purified water would be injected underground, to restore the basin. Santa Cruz and Scotts Valley’s water districts are also considering building recycled water facilities.
Last month, Pajaro Valley Water Management Agency’s board approved a project with the Resource Conservation District of Santa Cruz County that would pay landowners to build recharge basins on their property. The project is modeled after solar panel systems that pay owners who return electricity to the grid. Landowners would be rewarded based on how much rainwater they can return underground.
Another possible project: Santa Cruz’s water district is considering sharing the water it pulls from the San Lorenzo River with the Soquel Creek Water District. That would allow Soquel Creek customers to let their basin rest and recharge a bit when the river is running strong.
Santa Cruz County already has among the lowest per capita water use in the state.
“We feel the public’s done their part, and we’re really trying to do our part now,” says Duncan, who is also part of the Santa Cruz Mid-County Groundwater Agency’s staff. “We have to have supplemental [water] supplies. We can’t solve this problem through conservation. I think we all understand that now.”