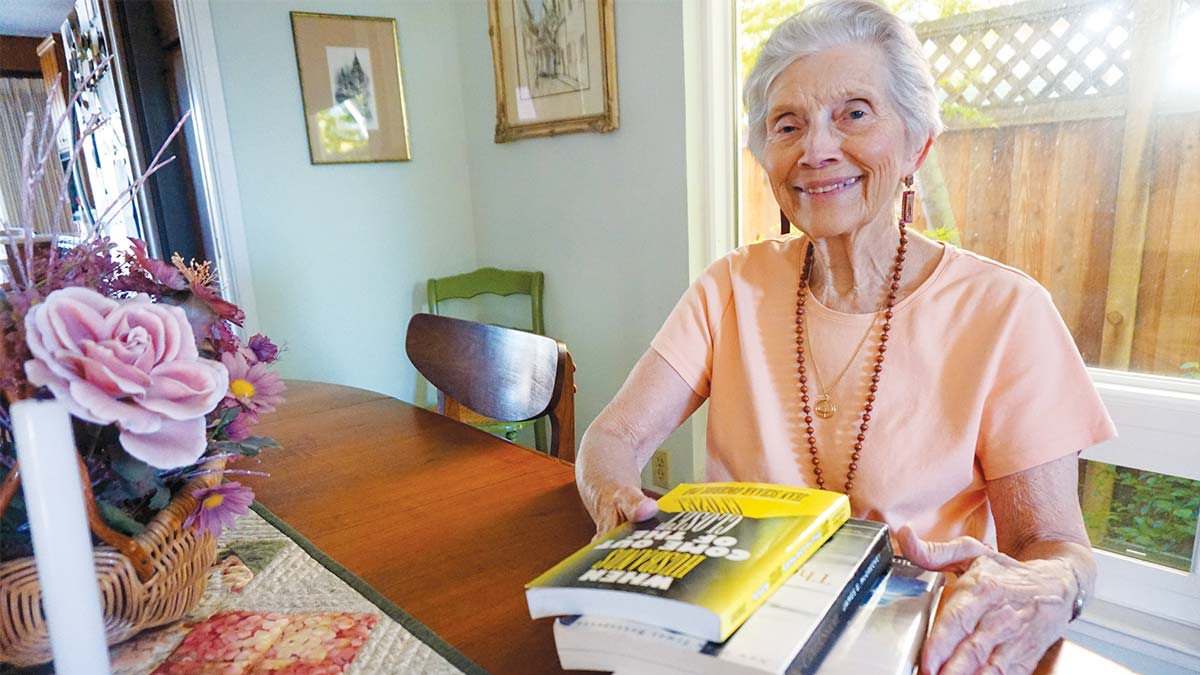 Two notebooks, brimming with secrets, sat for years in a drawer under gift wrap and ribbons. Beside them, a manila envelope stuffed with phone records, hotel bills and receipts.
“I didn’t know what it was, but I knew it was for me,” says Alison, who asked to withhold her surname for privacy’s sake. “It seemed like God lined up a sequence of events that led me to my mom’s diaries at that moment. I wouldn’t have been able to handle them any sooner.”
A few years ago, she continues telling her support group, mid-life soul-searching led her spouse, who was adopted as a baby, to reconnect with his birth parents. Tragedy followed. His mom died; then Alison’s. A year-and-a-half later, while discussing how one of their sons might be gay, her husband of two decades came out of the closet.

“Several things in a short span of time really rocked my foundation,” Alison tells the six people gathered for a recent Straight Spouse Network meeting in Sunnyvale. “We tried everything.” They went to couples therapy and opened the marriage to other partners. That, too, fell apart. They now take turns staying at the home they once shared to spend time with their three school-age children.
That the journals turned up just a week ago seems, to Alison, divinely timed. When her dad asked for help moving steel cabinets from one room to another, she dismantled them drawer-by-drawer to shoulder the weight. One tray held her mother’s handwritten notes and a dossier on her husband—Alison’s father—that marked his comings, goings and phone calls. The diaries echoed Alison’s journey these past few years. Her mom, she realized, had battled the same suspicions, heartbreak and grief a generation before her.
In hindsight, the clues stand in sharp relief: the emotional distance between her parents, the inseparability of her dad’s male friends. “When my husband came out, he told me he sensed that my father is gay, too,” she says. “Now I know my mom knew.”
As a retired nurse and grief counselor, Joyce Miller knows about loss, though she has never gone through the kind that brings people to the Straight Spouse Network. For 19 years, she has guided jilted spouses through this singular kind of heartbreak.
When one of her sons came out in the 1980s, Miller embraced him but wondered how something so inextricably linked to his identity escaped her notice. In his honor, she became a devoted ally to the LGBT community. She marched in a parade with a sign that read, “I love my gay son.” She began volunteering for the nonprofit Parents, Families and Friends of Lesbians and Gays (PFLAG).
“That was the beginning of parents sticking up for their gay kids,” says Miller, who is slight and meticulously kempt, her white hair cropped close in a pixie. “But while some people were celebrating the fact that they had gay kids, I began hearing about these straight spouses who weren’t seeing a reason to celebrate.”
Social, religious and family pressures have forced men and women into the closet from time immemorial. As growing acceptance and landmark victories—such as last year’s Supreme Court ruling legalizing same-sex unions—embolden more people to claim their true identities, that sometimes means leaving a straight partner behind.

For spouses in Santa Cruz, PFLAG’s local chapter provides a network of family members, friends, and anyone who has had similar experiences, says PFLAG Santa Cruz County president, Neal Savage. “It creates a normality around the situation because most of us grew up in a heteronormative society, and when you realize it’s not that homogeneous, you can deal with differences,” says Savage.
There are a variety of groups for locals, he says, like LMFT Deb Abbott’s TransLove Support Group Santa Cruz, and Edie Frederic’s Rainbow Speakers and Friends in Carmel.
On the cultural front, these relationships between straights, gays, lesbians, and transgender men and women have figured into Netflix shows Frankie and Grace and Orange is the New Black and Caitlin Jenner’s real-life coming-out.
Amity Pierce Buxton founded the Straight Spouse Network 30 years ago in Oakland after the father of her two children and husband of 25 years came out as gay. For a time, Miller had PFLAG direct the straight spouse hotline to her personal phone and would send people to Buxton’s support groups. She eventually realized that Silicon Valley needed its own chapter and began hosting meetings in her Sunnyvale home.
By Buxton’s count, about 2 million American couples find themselves in Alison’s quandary, though stigma and denial make it tough to get an exact number. People marry mismatched partners for complex reasons that may include discrimination but also real affection, wishful thinking and the shape-shifting ambiguities of sexual attraction. Still, the split can send the abandoned spouse into a crisis of identity and faith in their own judgment.
“Before every rainbow, there is a storm,” Miller often says.
When Alison reveals her family secret, her support group peers—who asked to use pseudonyms to protect their families from gossip—widen their eyes.

Amity Pierce Buxton founded the Straight Spouse Network 30 years ago in Oakland after the father of her two children and husband of 25 years came out as gay.

“They say children are drawn to men who are similar to their father,” says David, who sits just left of Alison at Miller’s dining room table. “Maybe there was something there that made you feel comfortable with your husband.” Alison nods. “I mean, when I look at a woman now, I’m cautious,” continues David, who lost his pastor wife to another woman in the church choir. “I think, ‘Is she gay or is she straight?’”
“Me, too,” says Mary, a British ex-pat whose Orthodox Jewish ex-husband lived a double life, dating similarly closeted husbands for decades before their split. “I mean, what if there’s something about me that’s attracted to gay men?”
Evelyn, who warns the group that she can only talk about this with a heavy dose of expletives, shakes her head.
“But we had sex all the time,” she says in exasperation, adding that she enjoyed 20-some-odd years of relative bliss before her ex’s jarring pronouncement right before her 50th birthday. “That was never a problem. How do you fake that? I don’t know. I really don’t. When I married my husband I was dating three guys and I picked the fucking asshole.”
That may be the most difficult part to understand, Mary says. She often wondered whether her husband willed his erections by thinking of other men. Another attendee—Eric, whose wife left him for her best friend after he uncovered their affair—remarks on the irony of some of their gay spouses being so homophobic.
“I think it comes from fear,” Mary says. “Even if they’re living a homosexual life, it’s been suppressed for so long that it sort of deranges the psyche. There’s a lot of anger there. But for the straight spouse, too. Because you gave your life to this person, but didn’t realize that you signed separate contracts.”
Eric says he was never angry with his wife. Well, maybe about the deception. “All I know is I can’t watch lesbian porn now,” he says, eliciting laughter from the group.
Alison says her focus has shifted from obsessing about her ex to finding her own happiness. “I do believe my mom came to this group,” she says. “That would have been around 2000.”
Miller tells Alison to bring a photo of her mom next time. Maybe it will jog her memory.