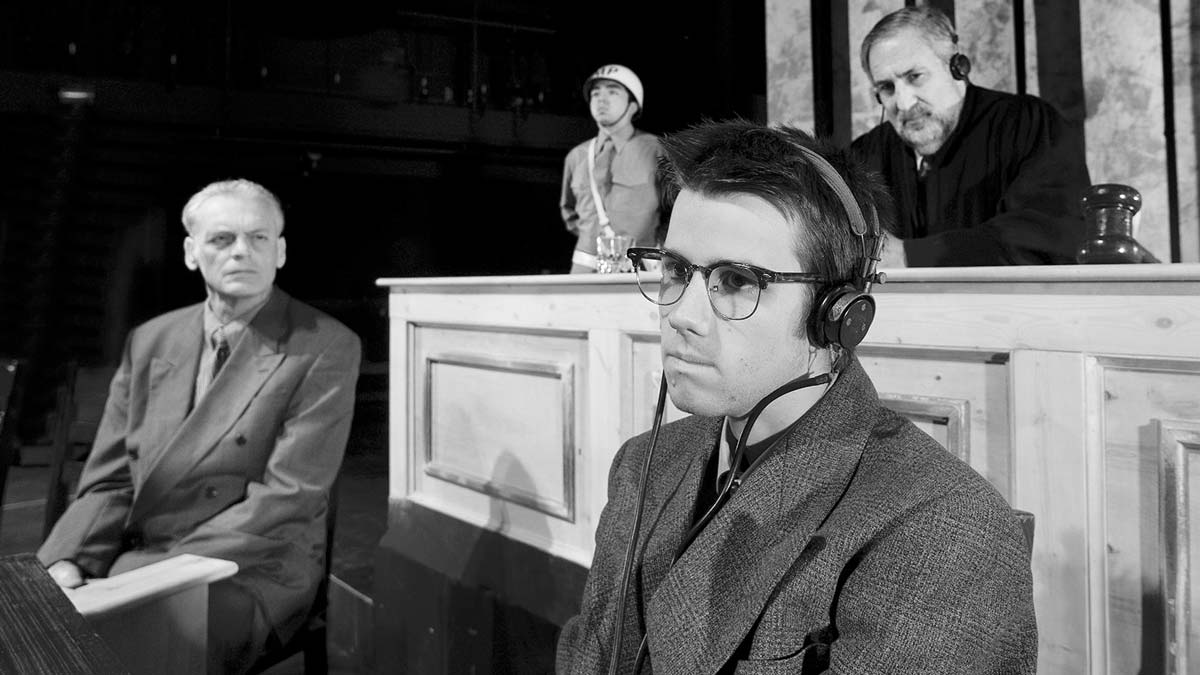 Last year, 94-year-old Oscar Groening was sentenced to four years in prison for Nazi war crimes at Auschwitz. Just last week, the Guardian reported that the Associated Press cooperated with Hitler in the 1930s, including forwarding Nazi propaganda to U.S. newspapers. The question of how genocide and war should be judged—and who will do the judging—is as relevant as ever, and forms the basis of Judgment at Nuremberg, a play presented by the Cabrillo College Theatre Arts Department at the intimate Black Box Theatre in Aptos from April 15 to May 1.
Judgment at Nuremberg was written in 1957 by Abby Mann about the fictional 1948 trial of four German judges for complicity in Nazi atrocities. GT spoke with the play’s director Sarah Albertson and Peter Gelblum, an actor, attorney and chair of the Santa Cruz chapter of the American Civil Liberties Union, who plays the role of Judge Haywood.
Why are you producing this play now?
SARAH ALBERTSON: A year ago I was watching the 1961 film version of Judgment at Nuremberg, and I was struck by how timely it was. The play focuses on Ernst Janning, a judge during the Nazi-era in Germany who is faced with a military tribunal for war crimes against humanity. When I decided to do the play, we were watching on television the many refugees fleeing violence and heading to Germany and Europe. It struck me that that is so much in the atmosphere of the play—the exclusion of people due to ethnicity or religion. Watching the refugees from the Middle East brought me to this play, in a sense.
The play raises questions about responsibility, retribution and which law and authority to follow.
PETER GELBLUM: There’s a lot of dialogue about all of those points in the play. We’ve added some lines to update the play. One of the four Nazi judges on trial says, “I was doing what I thought judges are supposed to do, which is to follow the laws and not to make up my own mind about what is the right and wrong law.” But I have some lines in the play like, “They’re not so different than us.” A black American soldier in the play says, “I wouldn’t be shocked if it happened here in the U.S.—I know these people. They’re in my hometown.”
The first time I went to Europe and spoke with Germans about the Nazi period many of them said, “Who are you to judge? Germans are at least grappling with our history. People from America have yet to do so.” The history of the U.S. includes genocide, slavery and continual warfare.
GELBLUM: There’s a line in the play by the defense attorney saying to an American guard, “I could show you pictures of Hiroshima and Nagasaki.” Later, the general says, “Are we going to put Truman on trial for that?” and someone says, “Maybe we should.”
ALBERTSON: When Abby Mann was writing this play in 1957 he said, “It was a breach of good manners to bring up the subject of German guilt for events during the Third Reich. There was a new crisis with the Russians and Germany was suddenly our new ally.” There was an effort by [President] Eisenhower to not have this play done. Initially it was a Playhouse 90 Production on live TV directed by George Roy Hill. There was this effort to wipe out this history even on our side.
GELBLUM: One of the sponsors of Playhouse 90 was a gas company. They tried to get all references to the Nazi gas ovens deleted from the script. They didn’t want their product associated with the Holocaust. The director and producer refused to take it out. It was performed live on TV and they bleeped out the words “gas ovens.”
Information continues to be revealed about Americans who cooperated with Hitler and profited from the Nazi war. The book IBM and the Holocaust explains how they sold their business machines to Hitler during the Holocaust.
GELBLUM: I didn’t know about IBM, but there is a reference in the script about American industrialists supporting Hitler. This production has quite a few Cabrillo College students in it and helping backstage, and I asked one of them what they’d learned about the Holocaust and they said, “We spend about five minutes on it.” They get statistics on the number of people killed, and that’s it.
In January 2016, a trial began for 95-year-old Hubert Zafke, who was charged with war crimes as a medical attendant at Auschwitz. What do you think about this method of reconciling the past?
GELBLUM: I think it’s a good thing. These people escaped responsibility for all this time. I’m sure a lot of people say, “Come on! They’re 90 years old, let it be.” Everybody needs to take responsibility for their actions. There’s a lot of discussion about that in the play. I urge people to bring their open minds to the play. We’re hoping to have some discussions after some performances.

‘Judgement at Nuremberg’ opens April 15 and runs through May 1. For tickets and showtimes, visit cabrillovapa.com or call 479-6154.

Previous ArticleNews Briefs for the week of April 13

Next ArticleLove Your Local Band: Ella and Henry