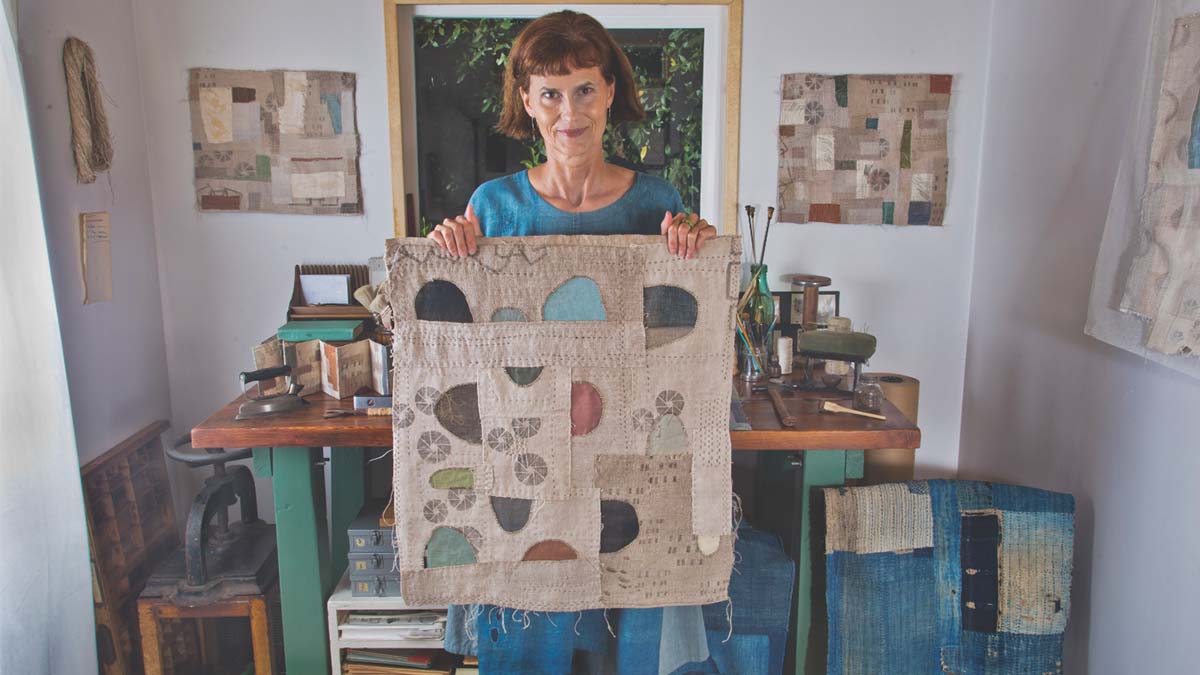 A sphinx with planed cheekbones and straight-edge bangs, Jody Alexander makes artwork as dramatic as her appearance. It’s rare when a creative person’s day job and artistic practice entwine as seamlessly as they do for this former competitive swimmer. A librarian by training and an award-winning book artist by trade, Alexander’s body of work incorporates themes—and actual bindings—of well-worn library books into meticulous textile sculptures, wall hangings and handbound books. Reversing Virginia Woolf’s description of memory as “a seamstress,” this seamstress stitches memories into soft linen pages.

The trigger for Alexander’s mesmerizing fabric designs is a utilitarian Japanese craft called boro. “The word boro means rags,” explains the auburn-haired artist. “In Japan it is a practice of repairing and stitching and transforming rags into useful items—bags, futon covers, clothing.” Alexander deepened her acquaintance with boro while traveling to Japan on her 2014-15 Rydell Visual Arts Fellowship. The tradition of layered and stitched creations now forms the heart of her many popular classes.

An example displayed on her studio work table is worn yet sumptuous, a small inventory of indigo cotton shapes and stitches that possess a distinctive history and undeniable beauty. I run my hands over a small book of stitched linen in Alexander’s tiny workroom. Its archive of stitches and appliqued shapes feels like a form of braille, a handsewn legacy of time and memory. The book’s colored shapes are made from recycled book covers. Alexander, who works as a reference librarian at Cabrillo College, rescued many of the books that had been withdrawn from circulation—they are stacked along one wall of her studio—and has found ways to recirculate their faded beauty. “My work is a meditation on those past items,” she says.

Inspired by the work she did for her Rydell exhibition two years ago, Alexander began “rethinking” the world of Japanese boro textiles. “I started ripping off the covers of the old books and then mounting them on pages of European linen that I love,” she says. The book colors provided the palette. The collection—ironically entitled KEEP, from a discarded library stamp she found—amplifies the dignity of the discarded.

In her classes, Alexander introduces students to “a very simple vocabulary” of stitches, something she also does at workshops she gives all over the country. At a recent workshop called Shakerag in Tennessee, a fellow instructor encouraged her to “embed the place” into her work. “So I dragged my pieces of linen through the dirt, in the water, incorporating the place into it,” she says.

Growing up in Los Altos, Alexander went to UCLA on a competitive swimming scholarship. Swimming was a repetitive activity too, Alexander recalls, as we study the repetitive machine stitchery that defines and shapes her latest wall hangings. She eventually chose art history as her college major, intending to go into design. One day it just hit her. “I need to make!” So she moved to New York and worked in art galleries before heading to Boston for a master’s degree in library science.

“Then I discovered book arts at Harvard’s Houghton Library,” she says, her eyes widening. “Then bookbinding.” Alexander and her young son settled in Santa Cruz in 1999 when she began working at Cabrillo’s library. Her part-time library work allowed her the freedom to explore her own practice and begin teaching book arts.

Flipping through the soft fabric pages of a boro sampler book, she agrees that books are tricky to display. Most of her work is formed through layers of fabric, usually starting with a mull backing onto which are sewn more layers and pieces. “When I work I go into a zone,” she says. “I’m in a fugue state.”
Alexander admits that her real love is “making the book. It’s precious and intimate and invites one-on-one viewing. A book is physical and personal,” she says. She is also enamored of the Japanese tradition of recycling bits of cloth. “Boro is still speaking to me,” she says, smiling. “I love its evidence of past history and repair. Taking the old and combining it, and making it mine.”

Currently, she’s working on a sub-series of her ongoing Bibliomuse project. Taking graphic motifs from “nerdy old books,” Alexander creates stencils based on that motif or logo. She deconstructs the motif, cuts stencils, inks them or block prints them, giving the overall piece a visual harmony. “The project then becomes a memorial to the original book,” she says.

Alexander’s patience and artistry have attracted a following. “Now that the boro workshop has taken off, I’m invited to teach it all over the country,” Alexander says with a grin. “It’s become so popular—it speaks to people.”

Find out more about Jody Alexander and her upcoming classes at wishiwashistudio.com and at jalexbooks.com.