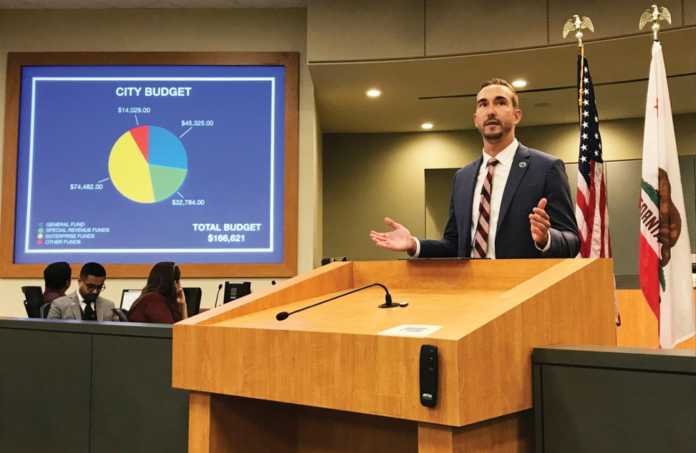 Matt Huffaker will leave his position as Watsonville City Manager for the same job in Santa Cruz, Watsonville city leaders confirmed with the Pajaronian Thursday afternoon.

The Santa Cruz City Council, in a press release, said it made a unanimous recommendation for Huffaker to take over as the city’s top official. It will vote on the appointment at its Nov. 9 meeting. If approved, he would start on Jan. 3, 2022.

The final details of his employment agreement will be released in advance of that meeting, according to city spokeswoman Elizabeth Smith.

Huffaker did not immediately return a call seeking comment Thursday.  In a press release, he said that he was “humbled” and ready for the opportunity.

“I think my local experience and established regional partnerships will allow me to hit the ground running,” Huffaker said in the release. “I’m ready to get to work.”

Watsonville Assistant City Manager Tamara Vides said that the Watsonville City Council will meet in the near future to discuss transition plans. It is unclear when that will happen.

Watsonville Mayor Jimmy Dutra said Thursday that while he’s saddened to hear that Huffaker is leaving, he was ultimately happy for the outgoing leader.

“Matt is young, ambitious and he is in control of his own future,” Dutra said. “If this is his choice for his future, I’m happy for him.”

First hired as assistant city manager in 2016, Huffaker has been Watsonville’s lead official since being appointed to the position in 2018.

In that short amount of time, Huffaker has done many good things for the small agricultural hub, says Dutra. That includes, among other things, increasing revenues and stabilizing the city’s finances, advocating for the funding of a $22 million renovation of Ramsay Park and working to bring other funding to help Watsonville recover from the Covid-19 pandemic.

“A lot has happened since Matt has been here … his stamp is going to be on several aspects of the city,” he said. “This makes me really sad, but I’m grateful for what he has done for our city.”

Santa Cruz Mayor Donna Meyers said Huffaker’s success in Watsonville was a big reason why they selected him over two other candidates. She said his ability to balance Watsonville’s finances, and his recent work with the Ad-Hoc Committee on Policing and Social Equity made him the clear choice to lead Santa Cruz through a slew of challenges in the near future.

“[The police committee] was something that really stuck out for us,” Meyers said. “One of the things our community tells us is that they really want a city manager that they can engage with and who is responsive. Matt seems really supportive of that idea of a city manager being involved in the community.”

Along with its issues in dealing with homelessness and affordable housing, Santa Cruz is also in the midst of hiring its new police chief and fire chief, as well as a new finance director that will try to help the city weave its way through the projected pandemic-related recession and the budget crisis.

If appointed, Huffaker would step into a position vacated by Martín Bernal, who announced his retirement in February. He officially left the position at the end of July after 24 years of service with the city of Santa Cruz and more than 30 years in public service.

Huffaker’s departure puts Watsonville’s leadership in flux heading into a year that could see mass turnover in its elected leaders. Four city council members will either be up for reelection or will have to vacate their seats because they will term out, and another seat will be determined in a special election on Dec. 7.

In addition, the 4th District Supervisorial seat currently held by Greg Caput will head to the polls next year.

Watsonville is also actively looking for a police chief after the retirement of David Honda earlier this year.

Huffaker, who received a five-year contract extension from the Watsonville City Council earlier this year, earned his bachelor’s degree in political science from Point Loma Nazarene University in San Diego and graduated with a master’s degree in public administration from California State University East Bay.

Before being hired in Watsonville, Huffaker, a native of Oakley in Northern California, said he has been involved in local government for 15 years and city administration for seven years.