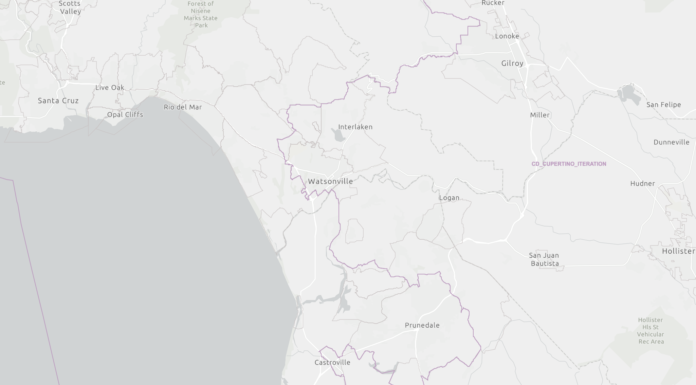 WATSONVILLE—The Watsonville City Council on Tuesday unanimously approved a resolution to send a letter to the California Citizens Redistricting Commission demanding it not split Watsonville from its fellow Santa Cruz County cities in the upcoming congressional redistricting.

The letter, penned by outgoing Mayor Jimmy Dutra, came to the City Council as an emergency item at the end of its final regularly scheduled meeting of the year.

The coastal area to the west of Watsonville, including La Selva Beach and Pajaro Dunes, would stay in the 20th District. So, too, would Corralitos and the other communities just to the north of Watsonville.

Watsonville, the letter states, has “little to no common voices or interests” with the other communities it is placed with in the proposed map.

“The Counties of Monterey, San Benito, and Santa Cruz have shared interests and characteristics that define them as a community of interest,” Dutra wrote. “All three counties have a shared economy in agriculture, media markets, culture and history.”

The California Citizens Redistricting Commission, a 14-member group made up of five Republicans, five Democrats and four people not affiliated with either of those two parties, must approve a final map by Dec. 23 and that map must be certified to the Secretary of State by Dec. 27.

The commission is holding a handful of meetings in the days leading up to Dec. 23.

If the proposed map is accepted, the Monterey Bay Area would be split among two congressional districts, a move that local elected leaders say would be “devastating” to Watsonville’s voice and sidetrack several multi-county projects in the works.

Chief among those projects, argues Santa Cruz County Supervisor Zach Friend, is the Pajaro River Flood Control Project, which this year took a major step forward after decades of stagnation thanks to federal leadership.

Friend, whose 2nd District oversees parts of Watsonville, also sent a letter to the commission in opposition to the proposed map. In the letter, Friend argues that carving out Santa Cruz County’s southernmost city from the 20th District would largely dilute its say at the federal stage.

“The unfortunate thing is that Watsonville has faced attempts to dilute its voice before—with a precedent-setting Supreme Court case ensuring that the residents of Watsonville would have a seat at the table,” he wrote. “In Gomez v. the City of Watsonville, the plaintiffs argued that the at-large elections system in Watsonville used for City Council elections was unconstitutional and violated the federal Voting Rights Act of 1965. At the time, even though Latinos in Watsonville made up half of the city’s population (it’s significantly higher now)—no Latinos had been elected to the City Council since the city’s incorporation.”

He continued: “This proposal for the new Congressional district brings forth many of the same concerns—diluting Watsonville’s voice on the federal stage and, in particular, diluting the voices of Santa Cruz County farmworkers, non-native speakers and first-generation residents.”

Members of the public can also submit comments to the commission, and Dutra and the City Council implored Watsonville residents to do so.

For information on the California Citizens Redistricting Commission, visit wedrawthelinesca.org.

Previous ArticleThings To Do in Santa Cruz: Dec. 15-21