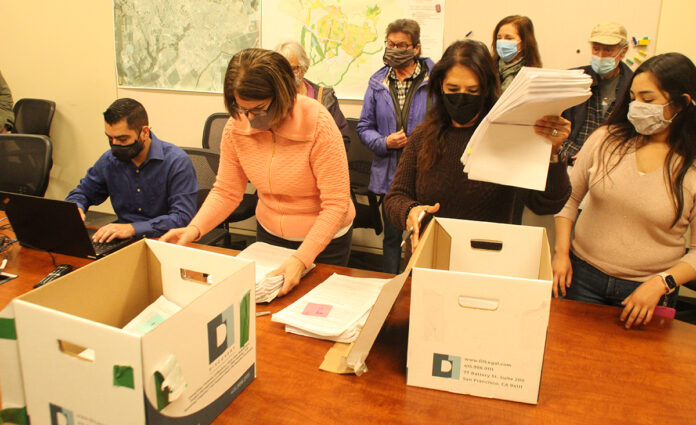 WATSONVILLE—About two dozen organizers packed into the Watsonville civic offices on Monday afternoon to turn in the signatures needed to put an extension of a landmark ballot measure before Watsonville voters next year.

Measure U, approved by voters in 2002, put restrictions on where, when and how Watsonville could expand in an effort to protect the sloughs and rich farmland that surround Santa Cruz County’s southernmost city. But some of the protections are set to expire in 2022 and the rest will expire five years later.

The Committee for Planned Growth and Farmland Protection over the past six months gathered some 3,100 signatures from registered Watsonville voters to put the item on next year’s ballot.

The coalition of environmentalist and agriculture industry leaders created for the sole purpose of extending Measure U through 2040 only needed to submit roughly 2,200 signatures—or 10% of Watsonville’s voting body—to the Watsonville City Clerk’s office before Dec. 15.

The signatures must now be verified by Watsonville City Clerk Beatriz Vazquez Flores.

Former Watsonville Mayor Betty Bobeda, who brought the initial petition forward more than a year ago, said that the fact that they surpassed that mark by nearly 1,000 signatures showed there is overwhelming support for the extension.

“The people of Watsonville don’t want urban sprawl,” she said. “They want preservation of farmland.”

The renewal will be on what should be a contentious and lengthy election day ballot that will feature several Watsonville City Council races and a battle over the county supervisorial seat that oversees most of Watsonville, the 4th district.

Committee leader Sam Earnshaw says that the group will now try to build support for the extension, an effort that he expects will ramp up after the June 7, 2022 primary. While he doesn’t expect it will be difficult to win over Watsonville voters—he said they already had their say in 2013 when they overwhelmingly voted against Measure T—a bigger fight will be trying to convince the Watsonville City Council to support it.

The local elected leaders have been largely critical of the measure’s impact on the city when discussing the item during public meetings. Some City Councilmembers have gone as far as calling the committee’s claims about Measure U “propaganda” and others have said that there are racist overtones in their stance against allowing Watsonville—a community with a large Latinx population with several people who cannot vote—to expand in order to build more housing and attract more employers.

Earnshaw, however, says that Measure U has been good for Watsonville and that the city’s urban line limits should stay where they are to limit urban sprawl and encourage developers to renovate blighted areas and underused parcels within city limits. The farmer turned environmentalist also cites a citywide survey in which 95% of respondents said the city should create additional jobs and housing near already existing infrastructure to help preserve natural and agricultural land.

“It’s not like there aren’t any [vacant and underutilized parcels] in Watsonville,” Earnshaw said. “Focus on that, and then you got 2040 when you can try to go for some farmland again.”