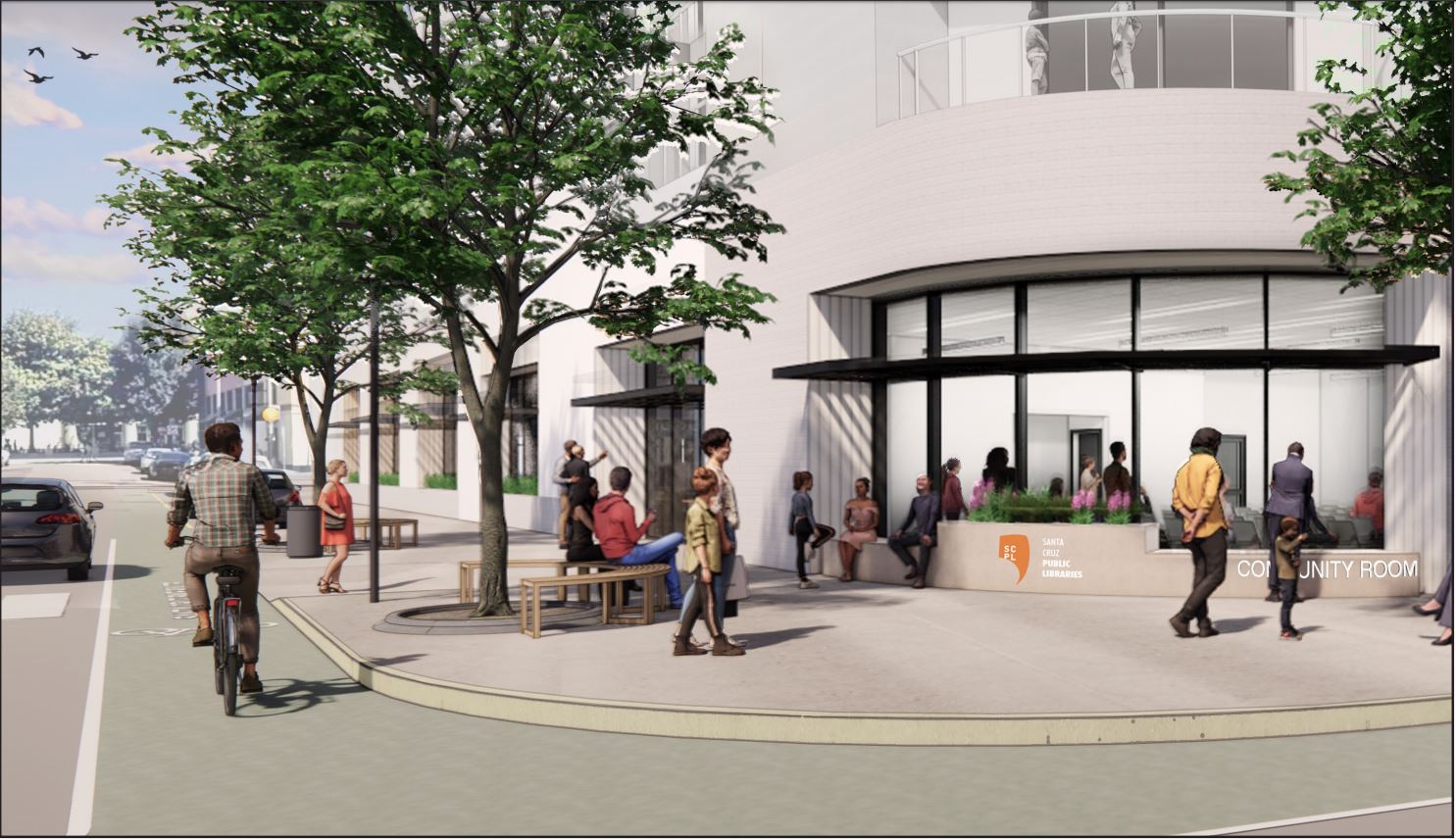 The heated debate over a proposed multi-story parking garage, apartment building and library is rounding a corner and headed for the next level.

Opponents of the project are preparing to gather signatures to try and stop it from ever breaking ground, while attempting to shape the future of downtown Santa Cruz.

The group—Our Downtown, Our Future—wants to block the construction of a planned mixed-use project on Lot 4, the current site of the farmers market. Under the city of Santa Cruz’s current plan for downtown, the city would develop the site. The project would include more than 100 units of affordable housing.

By contrast, the Our Downtown plan pitches to build affordable housing at other lots downtown, while preserving a permanent place for the farmers market at its current location. The group also wants to remodel the existing downtown library, instead of building a new one.

The group has made no secret of its intention to circulate a petition for a ballot initiative, even signaling its plans to the City Council, as reported by Lookout Santa Cruz. Currently, Our Downtown is waiting for City Attorney Tony Condotti to finish reviewing the language, but Longinotti and fellow organizer John Hall are eagerly looking forward to their launch. They plan to make affordable housing a central part of their campaign.

But some supporters of the project and of affordable housing are skeptical of their intentions. It hasn’t helped that a five-week-old draft of the ballot language, crafted by Hall and other opponents, has been making the rounds. The document includes a note about how to “strengthen” the language that already blocks the construction of a new library and garage and make things more explicit.

It reads, “Is there a way to strengthen this and to prevent the construction of affordable housing on Lot 4?”

It was written by John Hall.

Hall explains to GT that he made that comment at a time when he and his allies were still feeling their way through the issues around downtown development. In any case, Hall feels that Lot 4—on Cathcart and Cedar—is a better site for the farmers market, and also that Lot 7—on Front Street—would be a better place for apartments. He adds that the group did not end up including any mention of blocking affordable housing in the final ballot language.

But Joe Ferrara, who owns Atlantis Fantasyworld and supports the mixed-use project, says he’s “mystified” at how people in Santa Cruz who call themselves “progressive” aren’t more supportive of affordable housing.

Santa Cruz Community Ventures Executive Director Maria Cadenas, a housing advocate, feels that the candor in Hall’s note reveals the real intentions behind the group—trying to block affordable housing and dictate where it belongs.

Noting a long history of racism in Santa Cruz, Cadenas says that the city—with its large single-family-zoned neighborhoods—has a bit of a gated community feel to it. And when she hears well-to-do Santa Cruzans get choosy about all the places they don’t want new multifamily housing, it sounds to her like they are telling working people “wait your turn,” she says.

Hall says he does care about affordable housing and his concerns were just about Lot 4, specifically. He adds that he has been working as part of a coalition to get housing built as part of the Peace United Church of Christ. “I’ve been in the trenches, working to create affordable housing,” he says.

Former Mayor Don Lane—interim governing board chair for the nonprofit Housing Santa Cruz County—supports the mixed-use project, partly for housing that would be included on site and partly because of the potential to build more affordable housing at the site of the current library.

“And then, some of us say we’re going to have to pull out all the stops, and we have an incredible opportunity to build affordable housing on this site,” Lane says.

If a new development gets built at Lot 4, it wouldn’t spell the end of the downtown farmers market. Santa Cruz Farmers Markets Director Nesh Dhillon and the market’s board has been working with the city to identify a permanent pavilion for the market downtown. Dhillon says he understands where Hall and his group are coming from, but they don’t speak for the market itself, Dhillon says.

“They want this vision and they want it to be on Lot 4,” Dhillon says. “But if Lot 4 did get developed, they would still want to see their concept. Which is more important—the location or the concept? The concept can go in a lot of places.”

If the city’s mixed-use project does end up becoming reality, Santa Cruz could potentially put housing in both Lot 4 and Lot 7, but it would depend on a number of factors, including the new site for the farmers market.

Hall believes that no one has all the solutions to the housing affordability crisis right now. He says his vision is better for the long run. “If we look 40 years ahead,” he says, “do we want Lot 4 to have a six-story building on it, or do we want it to be public space?”

On the other hand, there’s another idea that hasn’t been a part of the discussion around new buildings and the future of Lot 4.

And that is that maybe a six-story building isn’t tall enough.

He looks at the project not as a monolith, but as a catalog of individual policy decisions and political tradeoffs.

If Santa Cruzans really care about affordable housing, Simon hopes they will lobby the City Council to essentially proceed with the mixed-use project it planned, with two modifications. He says the city should cut down the parking in the project again and also allow the nonprofit developer to go higher. That would let the builder put more homes in the project and maximize affordability.

Now is the time, Simon stresses, for Santa Cruz gets over its fear of moderately tall buildings.

“I’m excited about any project that has affordable housing,” Simon says. “We should all be pushing for the project to have more housing, more height and less parking, since that is a very expensive use of public funds.”