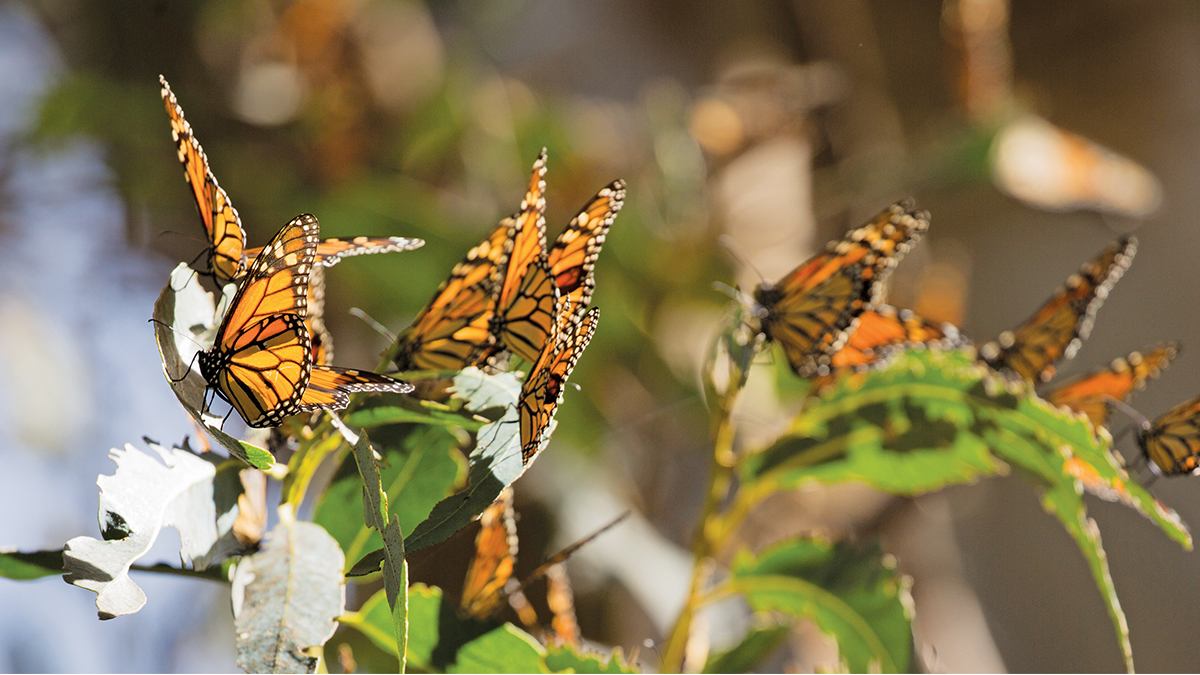 This past October, Santa Cruz lit up under a cloak of seasonal black and orange—nope, not Halloween. And definitely not the Giants. The monarch butterflies have returned to Santa Cruz.

This year’s numbers are up a few thousand, says veteran Natural Bridges State Park interpreter Martha Nitzberg. Even though it’s early in the season, she estimates there are already about 9,000 monarchs fluttering about their designated preserve, located at the state park. Last year’s population of 3,500 represented an all-time low.

“It’s better now than in a bunch of years. It’s exciting to see so many butterflies so early in the year,” Nitzberg told me last month.

Be that as it may, the number of Natural Bridges’ overwintering butterflies is still down more than 95 percent since 1997, and the Tasmanian blue gum eucalyptus canopy that has sheltered generations of butterflies is falling apart.

Extremely sensitive to changes in weather and habitat, as well as to toxins in the environment, monarchs migrate up and down North America, with thousands coming to the local eucalyptus grove, which is nestled in a small canyon. Eucalyptus trees have small leaves that are thin enough for monarchs to wrap their feet around. For longer than anyone can remember, those trees have also provided the butterflies a convenient food source and a haven during the winter months, like a warm blanket or an umbrella to protect them from the wind and rain. But the blanket at Natural Bridges is becoming worn, frayed, and tired.

Monarch populations at the state park began declining precipitously in 1997, Nitzberg says, which is also when the once-reliable eucalyptus curtain began coming down. “Our grove started losing trees in the early 2000s,” she recalls, with much of the damage during some violent wind storms in the ’90s.

A few years later, pitch canker—a pine tree-killing disease—infected the vast majority of Monterey pine trees at the state park, eliminating the windbreak from the park and putting more strain on the eucalyptus. “Our grove is getting old,” says State Parks volunteer Abby Pulman. “Trees are falling down, and the grove is not as protected.”

For decades, Nitzberg and others pushed to plant more eucalyptus trees around the park to protect monarchs’ overwintering, a debate she’s reticent to rehash. “It’s a touchy subject,” Nitzberg says. “I need to be politically correct.”

The blue gum eucalyptus is officially classified as a “moderate” invasive species, and some groups, like the California Native Plant Society, don’t want any of it at state parks—or pretty much anywhere else for that matter, even to refortify a butterfly grove.

A few months ago, Nitzberg and her colleagues did score a win in the debate, as staffers will be allowed to plant a three-tree windblock of eucalyptus trees to reinforce the grove.

Dan Gluesenkamp, executive director of the California Native Plant Society, used to be a docent at Natural Bridges, and remembers the situation being complicated. Gluesenkamp, who later managed a monarch grove at Stinson Beach in Marin County, says that although their size may seem like an advantage, eucalyptus trees can actually grow too tall and block out the sun, which butterflies need in order to thermoregulate.

Brett Hall, vice president of the Sacramento-based nonprofit, adds in a follow-up email that it’s impossible to know all of the factors at play. “Monarchs have been crashing everywhere, from other reasons beyond the degradation of the euc grove,” he writes.

Also, even a healthy grove of eucalyptus trees would not protect monarchs from a more existential threat: a parasite called Ophryocystis elektroscirrha, or “OE,” as it is known among butterfly enthusiasts. OE weakens the insects, often leaving them deformed and unable to fly as far or as long as healthy butterflies.

Scientists estimate that OE has infected 30 percent of the western migratory population.

It’s the latest crisis to strike an already battered species, and the situation on the Central Coast is serious. Once butterflies are infected, they do not recover. The Xerces Society, a butterfly advocacy group, is monitoring its spread.

And local gardeners may be making the situation worse. Nitzberg says that many Santa Cruzans believe they are helping the monarchs by planting milkweed in their coastal gardens to feed monarchs, and the trend began with the noblest of intentions. After all, the milkweed plant provides all of the nourishment a monarch needs to transform from caterpillar into butterfly. Milkweed plants were even sold at the Natural Bridges Migration Festivals for years. Attendees were encouraged to buy $1 plants to “save the monarchs” and plant milkweed in their yards to create “butterfly corridors.”

But the overly abundant milkweed has turned into a host for OE. These days, park workers don’t sell plants, and they discourage anyone within five miles of the coast from planting milkweed, because plants closer to the ocean are particularly susceptible. The flowery plant also disrupts monarchs’ iconic annual migration, when there’s too much of it, leaving them stuck in Santa Cruz year round eating the OE-infested plant grub.

If milkweed proliferates in the monarch wintering grounds, many butterflies won’t migrate at all. The butterflies will lay their eggs year round in Santa Cruz, overstaying their welcome.

Nitzberg discovered a large number of caterpillars this past summer in Santa Cruz County, and she’s begun questioning the status of the entire monarch migration.

Next ArticleWhat’s the toughest job you’ve ever had?