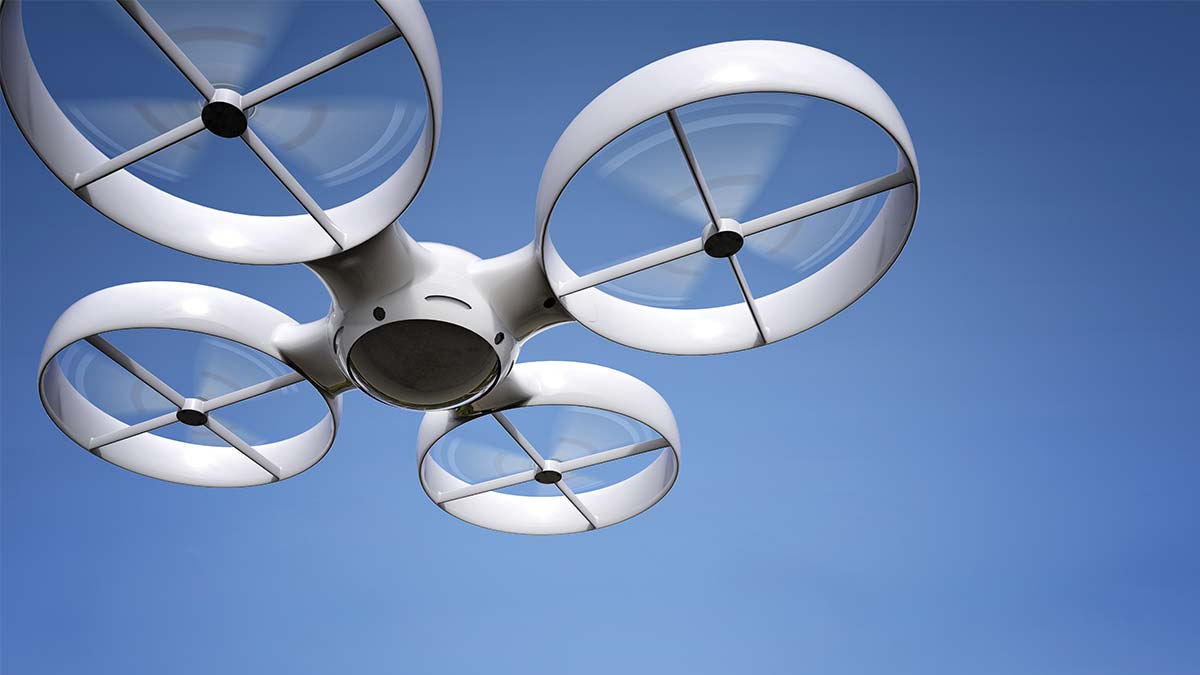 Director Tonje Hessen Schei’s Drone, a documentary about modern drone warfare, may seem like a strange selection for the Reel Work May Day Film Festival, which has been showcasing films about labor issues and working people for 15 years.
But festival organizer Jeffrey Smedberg says it’s a natural.
“Soldiers are workers in the military industry. Combatants and casualties on both sides of every conflict are working people,” explains Smedberg. “The Bill Motto VFW Post recognizes this connection and has partnered with Reel Work for many years, [highlighting] the brutalization of human beings and military workers’ resistance to dehumanizing conditions.”
This year’s festival runs through May 3 in Santa Cruz, Monterey and Santa Clara counties, with films on subjects as varied as California labor history, the link between mass incarceration and poverty, South African apartheid and climate change.
Drone will screen at 7 p.m. on Saturday, April 30, at the Vets Memorial Building, paired with a talk by former CIA analyst Ray McGovern on “America’s Drone Program: The Dark Realities of Modern Warfare.”
In 1990, after 27 years with the CIA, McGovern found himself an expert on a country that no longer existed, the Soviet Union. After retiring, he dedicated himself to social-justice activism, including co-founding Veteran Intelligence Professionals for Sanity (VIPS). GT spoke with McGovern about drones and his history with the CIA.


The film Drone features Brandon Bryant, an ex-U.S. Air Force drone pilot who killed more than 1,600 people. In the film he says of drone warfare, ‘It’s sort of like a bad science-fiction story. And we’re watching it happen.’ What are your main concerns about drones?
RAY MCGOVERN: Drones were developed for a specific and legitimate purpose: intelligence gathering. Satellites used to go over a certain point on earth just twice a day and people could predict exactly when they would come, so camouflage could easily be arranged. The intelligence community had a felt need for what we called a “dwell” capability—a platform that would dwell over a certain suspected terrorist training camp, etc., and be there 24 hours a day, and watch for as long as a week. Lockheed and all those high-tech arms manufacturers were delighted to do this. And then a general in the Pentagon said, “I bet we could put missiles on those things. That would kill a lot of people.” So they asked the arms manufacturers, “Do you think you could do that?” and they said, “No problem.” When I was in the Army we struggled about “capture or kill.” Now it’s just kill.
How does the use of drones affect the ‘war on terrorism?’
Drone warfare comes across to so-called militants or terrorists as the utmost cowardly act. So if you’re interested in inciting and cultivating the field for new terrorists, you couldn’t come up with a better idea than drone warfare. I say that not facetiously. There are people profiteering from making drones, from supplying the technicians, for training.  There are billions of dollars to be made on this technology. And racism is a main factor in our blithe attitude toward killing people who don’t look like us.
Activists Kathy Kelly and Brian Terrell were arrested recently at Volk Air National Guard Base in Wisconsin where ‘shadow’ drones are piloted. What do you think are the best strategies for challenging the use of drones?

I have the utmost admiration for Kathy Kelly. She and I were on the U.S. boat to Gaza in 2011. Alice Walker was also on that boat. We got 9 nautical miles into the Aegean when we were intercepted by very apologetic Greek Coast Guard people who said, “Please turn around. We’re under orders.” What does Alice Walker say about activism? She says, “I look at activism as the rent I pay for living on this planet.” … A group of Catholic workers and I shut down Hancock Air Force Base, where they push the buttons for the drones. I’m very happy to put my skin in the game. If you care about the kind of country that your children and grandchildren are going to inherit, it’s time now to put our bodies into the works, as Mario Salvo once said.
That has had some consequences for you personally, such as in 2011 when you stood with your back to Hillary Clinton as she gave a speech at George Washington University.
Hillary Clinton comes in and everyone stands and applauds. The president of the university gets up and flowerly gives her fulsome praise. We’re all standing and I think, “This woman is responsible for untold misery for her own political fortunes.” I couldn’t let her leave thinking that everybody was rapt in warmth for her. That morning the only clean undershirt I had was my Veterans For Peace shirt, so I took off my outer shirt and stood up and turned my back on her. I didn’t say a word, and just fixed my gaze on the back of the auditorium. It went well for about two minutes. Then all of a sudden I see this bulky guy in a civilian suit and I think, “Uh oh, this is going to have a no-good end.” And I’m taken down from behind. They put me in a chokehold and took me outside, where they administered some brutal stuff. Two pairs of steel handcuffs, and I was bleeding profusely from my wrists. Hillary Clinton’s speech that day was about the necessity to provide protection for dissent … in Iran! It was something out of Franz Kafka.
You worked for the CIA for 27 years. How did the agency change in that time, and why did you leave?
What people have to realize is that there are two CIAs. There is the one that President Truman intended—the analysis group—to tell him without fear or favor what’s going on in the world. He knew the Pentagon would tell him the Russians were 10 feet high. By ’48, the Russians had overrun Eastern Europe and the KGB was flitting all over the world overthrowing governments, so the leaders of our country in their wisdom said, “If the Russians are doing it, we have to have the capability to do it, too. We’ll put the covert action people right in with the analysts, and they’ll be one big happy family.”
I was able to tell the president what I thought about the Sino-Soviet split, and later about larger things when I worked under presidents Nixon, Ford and Reagan. President Reagan liked to sleep in, so we did the morning briefing to his chief advisors and they briefed the President later at 11:30 a.m., a decent time for somebody from California. George H. W. Bush actually was a friend of mine; I briefed him every other morning for four years. I told them the truth. Quite often, I didn’t know the whole truth. But they never asked me for the whole truth, because they were getting the whole truth from the covert operators. I was kept in the dark about covert actions. So, to this day you have this hybrid—what I call a “structural false.”
I turned 50 in August 1989, and I quit in January 1990. In November, it became clear the Soviet Union was going to collapse. I became an expert on a country that didn’t exist anymore. That was a bummer.
I can see where people would have a cognitive dissonance trying to figure out, “was there a part of the agency that did tell the truth?” There was, but it was corrupted by the likes of Bobby Gates and George Tenet and their acolytes. Bill Clinton came in and NATO was enlarged and that’s where we are today. Little did I know that I’d see my former profession corrupted to the point of falsifying intelligence to justify deceiving our elected representatives to authorize war. That’s as bad as it gets. Be afraid—not of terrorists so much. Be afraid of the incipient fascism that’s being introduced under that rubric military-industrial-Congressional-media-security-services-complex.

WHEN VOICES MEET
Sharon Katz & Marilyn Cohen, 2015, 86 min, South Africa
11 a.m., Sunday, May 1, Nickelodeon Theatre, followed by 1 p.m. reception and performance at Calvary Episcopal “Red” Church
When Nelson Mandela was released from prison, courageous South African musicians broke through Apartheid’s barriers to form a 500-voice, multiracial children’s choir. Threatened with bombs and thwarted at every turn, they prevailed and railroaded across the country aboard the Peace Train, singing their way into the hearts, minds and souls of a divided nation. When Voices Meet tells their story, and in conjunction with this screening, South African singer, choir director and activist Sharon Katz will perform songs from the Peace Train project featured in the film. Joining her will be the Santa Cruz Peace Chorale and Zabalaza, directed by Aileen Vance. Refreshments will be served.
HOW TO LET GO OF THE WORLD AND LOVE ALL THE THINGS CLIMATE CAN’T CHANGE
Josh Fox, 2016, 125 min, USA
7 p.m., Thursday, April 28, Del Mar Theatre (May 3 in Monterey)
The Oscar-nominated director of Gasland continues in his deeply personal style, investigating climate change. Traveling to 12 countries on six continents, the film acknowledges that it may be too late to stop some of the worst consequences and asks: what is it that climate change can’t destroy? What is so deep within us that no calamity can take it away? Speaker: John Laird, Secretary of the California Natural Resources Agency. Event Host: United Nations Association.
SISTERS IN THE BROTHERHOOD
Dan and Sue Schultz, 2015, 18 min, USA
THE COST OF CONSTRUCTION
Jordan Ehrlich, 2016, 90 min, USA
7 p.m., Wednesday, April 27, Live Oak Grange
Sisters in the Brotherhood is a realistic look at what it’s like to be a woman carpenter. Women in the trade talk honestly about the challenges, as well as the pride they feel from their work. The film title refers to the official women’s group of the United Brotherhood of Carpenters. The Cost of Construction explores a string of controversial deaths during the construction of MGM’s CityCenter in Las Vegas, the most expensive private construction project in U.S. history. The film looks at worker safety nationally, revealing a pattern of negligence at the highest corporate and government levels.
Complete schedule and information: reelwork.org.