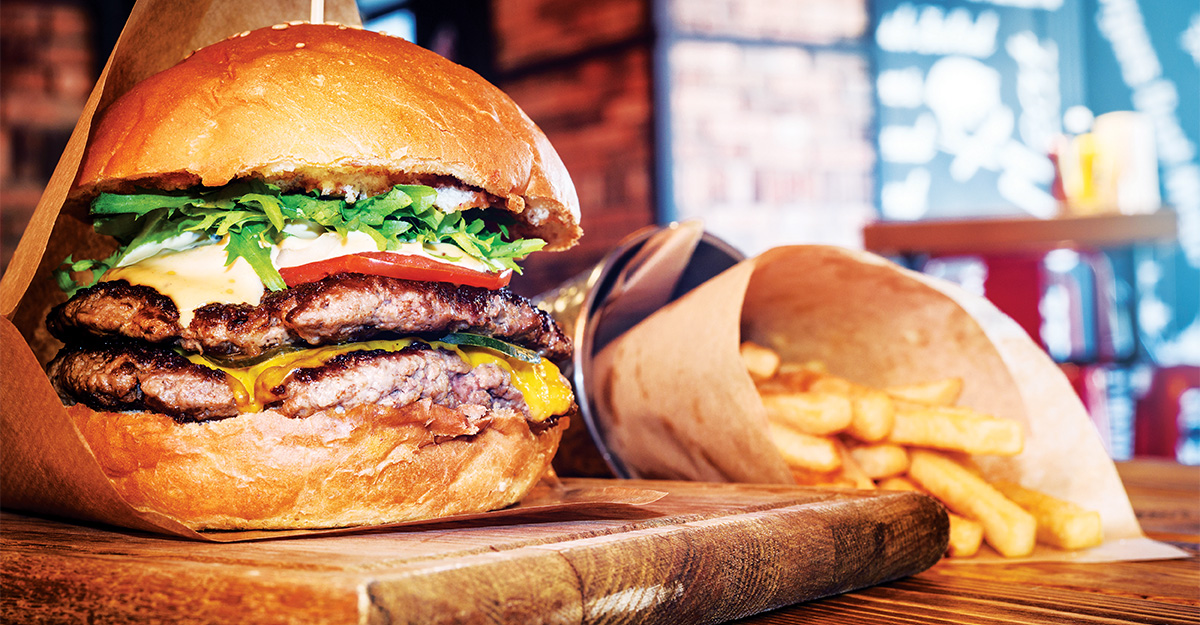 American comfort food still holds firmly to its core values, as embodied by the burger. Combining the softness of the buns with the satisfying umami of the patty (ground beef, or Impossible patty, or a myriad of alternatives) the burger is practically proof of the existence of some sort of divine plan.

Where did it all start, this passion for the handheld meat-in-a-bun meal? Well let’s start with the sausage. An ancient excuse for the application of mustard, sausage involves lots of ground up animal protein packed into a casing. Fast forward to either Germany or England, depending upon your choice of references. The need to speed up access to the ground-meat-plus-bread, combined with time constraints created by the workday, meant that the meat had to escape confinement. It came out of its casing closet, and loosened up. But the ease of access was non-negotiable.

Two slices of bread offered the first solution. You didn’t have to try to hold the meaty juices with your bare hands—the bread soaked them up. It was inevitable that that bread would soon be custom-shaped into the iconic shape of the patty interior, so the bread became circular—the oldest shape humans loved to create. The meal could be approached from any angle. Democratic, that’s what the first burgers were. They were a meal without fuss; just bread, meat and condiments that could be eaten quickly—during a lunch hour—and cheaply.

Still, the burger cried out for identity. The burger had to be one thing, not a composite of various animal parts, and in the beginning that meant beef. Ground beef, shaped into a roundish patty and served between the buns. But of course that wasn’t enough. More was needed—first mustard, then in rapid succession came pickle relish (or pickle slices). Then tomatoes, although probably not in the burger’s ancestral homeland of northern Europe. Then the onslaught of onions, lettuce, and finally the piece de resistance: cheese.

So perfect is the marriage of hot beef and melting cheese that the cheeseburger is, for many of us, definitive. A glorious, messy meal that requires two hands but no cutlery, the cheeseburger is the apotheosis of the burger’s identity.

The burger as we know it today got its start somewhere in the U.S. in the latter part of the 19 th century. Many states claim to be home to the hamburger inventor, but outside of some pretty good cases made for Wisconsin and Texas in the 1880s, it’s probably safest to say that a lot of burger entrepreneurs were working toward kicking off this cultural obsession around the same time.

In the beginning, it was fast food. By the 20th century, many of us were weaned on Big Macs and its baroque cousin the Whopper. To get a burger, you had to go to a diner—much like Burger Week’s Santa Cruz Diner where beach-goers stop to lunch, or to nosh on a satisfying burger after the beach. Or a drive-in. In 1921, White Castle began selling burgers for a nickel each. Eventually, the runaway success of McDonalds in the 1950s put the burger on every lunch menu. Soon there was KFC (which actually sold beef burgers in the ’60s), Wendy’s (with the bacon!), In-n-Out (with special spread), Carl’s Jr. (mmm, the thousand island dressing), and so on and so on. In particular, the day bacon entered the burger scene was tantamount to a religious conversion. What could be better than juicy ground beef made even juicier with crisp and salty bacon? The answer was of course, more bacon.

And it was inevitable that burger would expand its identity to include the turkey burger, the bison burger, the lamb burger, the un-burger, the veggie burger. At Belly Goat Burger, the gamut runs from the protein redundant Seoul Surfer, with layers of beef, smoked pork belly and fried egg, to the botanically intense Forager constructed around a blackened portobello mushroom, adorned with avocado, chimichurri tomatoes, sriracha olive aioli and baby greens. All vegan, all glorious. The burger on the runway, if you will. Yes, indeed, the burger has morphed into infinite variations. At Parish Publick House, the burger has surfed itself into an island attitude with the Hawaiian Burger. This baby is complete with grilled ham, swiss cheese, teriyaki sauce and pineapple salsa. Ethnic diversity to please just about everybody.

In addition to self-replication in a new variety of modes, the burger migrated onto new menus. No longer simply the all-American staple of fast food, the burger upped its game and joined upscale menus along with truffle gnocchi, Dungeness crab salads and fresh porcinis with polenta. Starting in the late 1990s, the burger took its place on upscale menus and chefs competed to turn out the burger as a serious entree, to be joined by artisanal beers and premium wines. And cocktails. The burger with a Moscow mule? Absolutely.

At Solaire, that’s just what you can have. Solaire’s Black and Blue Burger is an extravaganza of blackened angus beef with blue cheese, blue cheese aioli, all the trimmings on a brioche bun. The upmarket burger, with atmosphere to match. Especially pampering paired with a shot of your favorite mezcal and your favorite date.

The burger also loves to boogie in the company of live music, like it does at Felton Music Hall. Even though this vintage roadhouse in the middle of Felton is famed for its many fried chicken offerings, it makes a mean smash burger—thin, juicy with a caramelized crust. Add fries and a beer and you’re styling.

The burger likes to insist on its primal origins at places like Back Nine Grill and Bar, so easy to access, with an appealing remodel to the bar and interior. Reliable burgers with all the trimmings in a feel good atmosphere, immediately off Highway 17. And at Burger, where the name says it all, there’s a multiverse of delicious burgers in just about every form you could want—and many you never thought of.

At Betty’s, the all-natural beef contains neither hormones nor antibiotics. Here the burger struts its transformations, from the Basic Betty 1/3 lb. burger patty to the Gobbler with ground turkey, green onion sauce and a whole wheat bun. My personal favorite, the Mad Mex, frosts its beef with fresh guacamole and pepper jack. At Surf City Sandwich, the burgers are as generous as the sandwiches. The Vulcan Mind Melt takes you around the galaxy with Angus beef and applewood smoked bacon. Plus two cheeses and fried onion rings on garlic ciabatta. Flavor comes at you from all sides. Even the Surf City Burger delivers the full burger experience, with choices of cheese, and the full-on lettuce, tomato, pickles, onions and mayo adornments.

Great burgers are everywhere in the Santa Cruz region, even in places even more famous for their outrageous breakfasts and brunches, like Zachary’s. In fact, diehard burger heads have been known to pass up the iconic Mike’s Mess in favor of Zachary’s Breakfast Burger, in which two fried eggs, bacon, grilled onions and cheddar cheese hold down the burger, and the whole thing rides on a grilled platform of oatmeal molasses toast.

Capitola Grill ups the ante with its Surf & Turf Burger, in which eight ounces of sumptuous Wagyu Beef hangs out on a brioche bun, along with grilled prawns, roasted garlic aioli, cheddar and arugula. Plus a view of the ocean—hard to beat. But of course they offer a classic burger with half a pound of Angus beef and many, many trimmings. You can add fried eggs, bacon, even extra beef patties. There is more island thinking over at the eclectic Point Market & Eatery, where you can grab yourself a Mahi Burger slathered with grilled pineapple, mushrooms, tomatoes and a side of fries. But they’ve got a dozen burgers to choose from, including a Chipotle black bean burger as well as the mouth-spicy Pleasure Point burger with all the trimmings, plus Italian peppers and jalapeños. Yeow!

At Seabright Social, the Avocado burger with mango salsa and spicy aioli offers tons of mouthfeel and comfort flavors. At Bruno’s in Scotts Valley, award-winning burgers are part of the bar and grill action. Burgers are getting the star treatment at the Heavenly Roadside Cafe, with high-wattage condiments like grilled jalapeños, or grilled ham and an over-easy egg. Robbie’s Pizza & Subs has a mouth-watering Western Burger combo, involving a bacon burger with crispy onions, bbq sauce, plus fries and more. And Robbie’s in Capitola makes an offer you can’t refuse—a combo of burger, fries and drink for ten bucks!

Many burger lovers love their burgers with an ocean view. For that, there’s Gilda’s on the Santa Cruz Wharf, with the sights and sounds of Steamers Lane. Also on the wharf, Makai dazzles its various burgers with a sweet brioche bun and zippy pineapple-jalapeño chutney.

Crow’s Nest at the Yacht Harbor sports a wavefront view, lamb burgers with tomato onion jam, salmon burgers with Asian slaw and a full bar. At Paradise Beach Grille, you can feast on a halibut burger with monterey jack and avocado while watching the sunset on the Capitola Beach. The View at the Chaminade will make you an all-American burger, with cheese and bacon, and throw in the Monterey Bay view for free. Pono Hawaiian Kitchen has truly risen to the occasion by offering the Flying Pig on its Capitola Road digs. Yes, island devotees, there’s Kalua pork, grilled pineapple and pickled jalapeños, but there’s also grilled spam on the Hawaiian sweet roll bun. Michael’s on Main has a patio, a creek, a full bar and a quartet of tempting burgers, including the Grateful Burger made with Angus Beef, or unbeef. Neighborhood favorite Crepe Place is currently running crepe-wrapped Angus beef patties with cheddar and bacon, and a salmon crepe burger with fresh mushrooms and dill sauce. Sanderlings at the Seascape Resort is doing a trio of burgers, with the Beyond Burger plus smoked gouda, caramelized mushroom and crispy onion making vegan a luscious option.

For a sixth year, GT presents Santa Cruz Burger Week, happening Feb. 23 – March 1. During Burger Week, participating restaurants throughout Santa Cruz County will offer burger specials for $10, $12 or $15. With both hearty favorites and gourmet offerings, Burger Week encourages guests to try a new restaurant or rediscover a tried-and-true favorite. Below is a list of all of this year’s participants. You can find the Burger Week menu for each in this pullout and at santacruzburgerweek.com.

The View at Chaminade Resort

Next ArticleOpinion: Burgers to Fuel a Comeback